After many months of planning, Flyr started commercial operations yesterday, with its first domestic flight in Norway.

We have followed the launch and development efforts of the airline over the past few months. After the near-collapse of Norwegian Air Shuttle, several of their employees and management decided to start afresh. From the outset, the new airline would have a simple, no-frills operation. And they would place more emphasis on domestic destinations, like the early days of Norwegian. This makes Flyr’s first domestic flight quite appropriate.

Under ICAO, the airline has the catchy code ‘FOX’. So the first flight of Flyr was FOX408. It flew from Oslo Airport (ENGM) to Tromso (ENTC) in Norway, departing at 11:41am local time. The flight took one hour and fifty minutes. After staying on the ground for two hours or so, the plane returned to Oslo. The same aircraft flew another couple of sectors between the two cities later the same day.

Another Flyr Jet, Another First Flight

This was the first aircraft of the airline, with tale number LN-FGA. This is a Boeing 737-82R(WL), as is the airline’s second jet, LN-FGB. Today was this aircraft’s turn to perform its first flight for Flyr. It flew from Oslo to Harstad (ENEV), returning later in the day, before two more sectors to/from Tromso.

Before Flyr, both of these jets made their first commercial flight with Pegasus, a Turkish low-cost carrier. They are 8 and 8.6 years old, so they still have many years of service left on their wings. Their owner is lessor Pembroke. We first saw the jets at Shannon airport in Ireland, last May, as they emerged in their new colours.

The 737NG in general and the 737-800 in particular, could become an interesting choice for startup airlines. The slow but steadying supply of the MAX and other new jets, reduces lease costs for the NG. We have also seen Avelo in the US, recently start operations with the type. And of course the 737-800 remains the choice of Norwegian itself, which returned its newer MAX-8s to lessors. 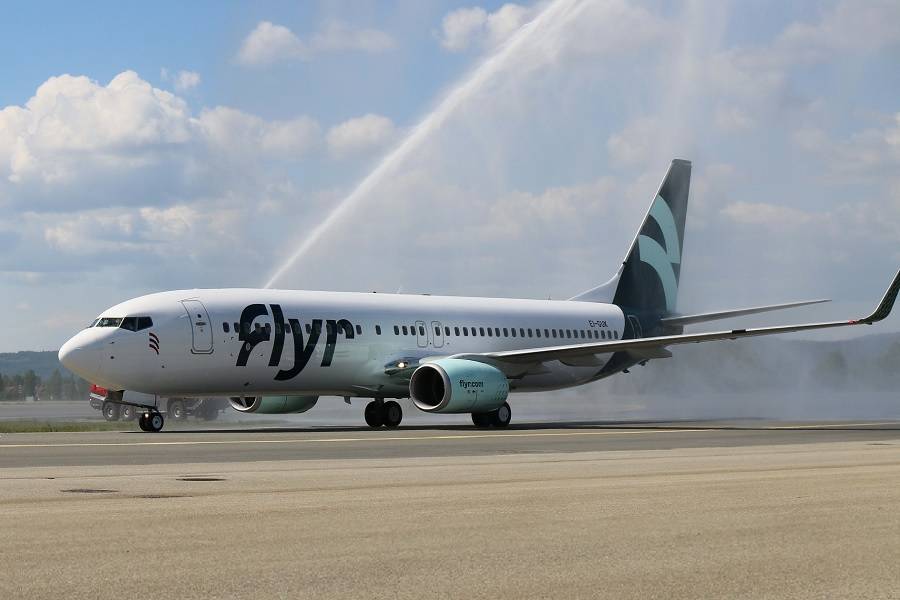 Flyr received its Air Operator’s Certificate (AOC) on the 16th of June, paving the way for its first flight yesterday. And they join a surprisingly long list of new airlines, given how odd these times are. Breeze, Avelo, PLAY, now Flyr and soon maybe Norse Atlantic, are bringing new names and liveries to airports. Their future development should be interesting!