In its latest earnings call, Embraer revealed a new, unorthodox layout for its upcoming turboprop concept. But what advantages does it hold?

The Brazilian company has had an interesting few months. We already saw that they showed signs of recovery already at the tail-end of 2020. Their Q2 results today continued this trend, with revenue for the quarter up 110% from the same time last year. And they could deliver a quarterly net profit, a recovery from well before pandemic times. Embraer hasn’t had a profitable quarter since Q1 2018. 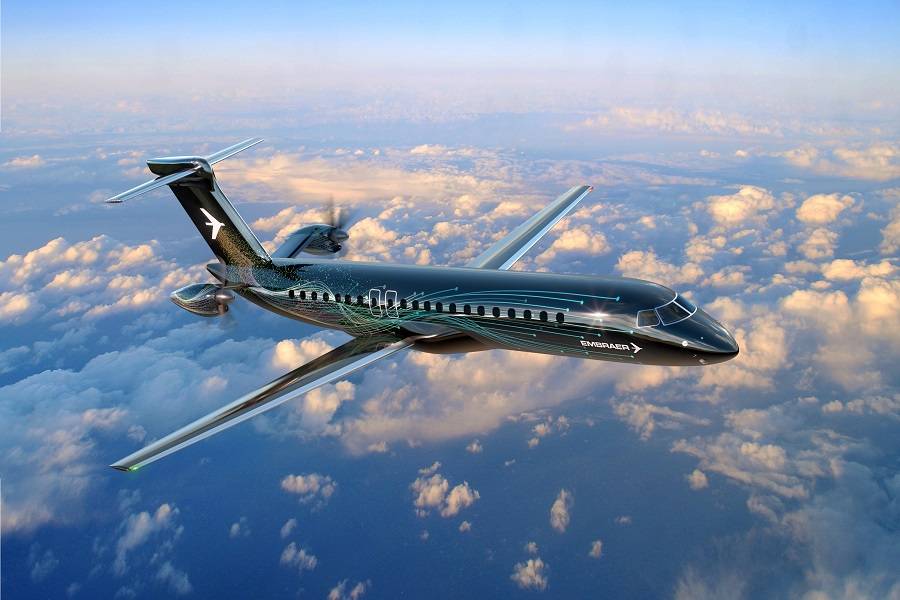 Understandably, Embraer is feeling bullish, and is keen to show progress in several different projects – including the new turboprop. As we have already seen, this is a departure for the manufacturer. Some see it as a move back towards the company’s early days, as a commercial aircraft manufacturer. But the latest rendering of their new turboprop, seems nothing like a ‘back-to-basics’ move for Embraer.

The design still uses the fuselage of the E1/E1 jetliner family. It has the same low-wing configuration as before, and a T-tail. But that is where the similarities end. The new version of the Embraer aircraft has two pylon-mounted turboprop engines either side of the T-tail. The engines are in a tractor configuration. The wing itself has moved rearwards, to balance the weight of the engines in the back. 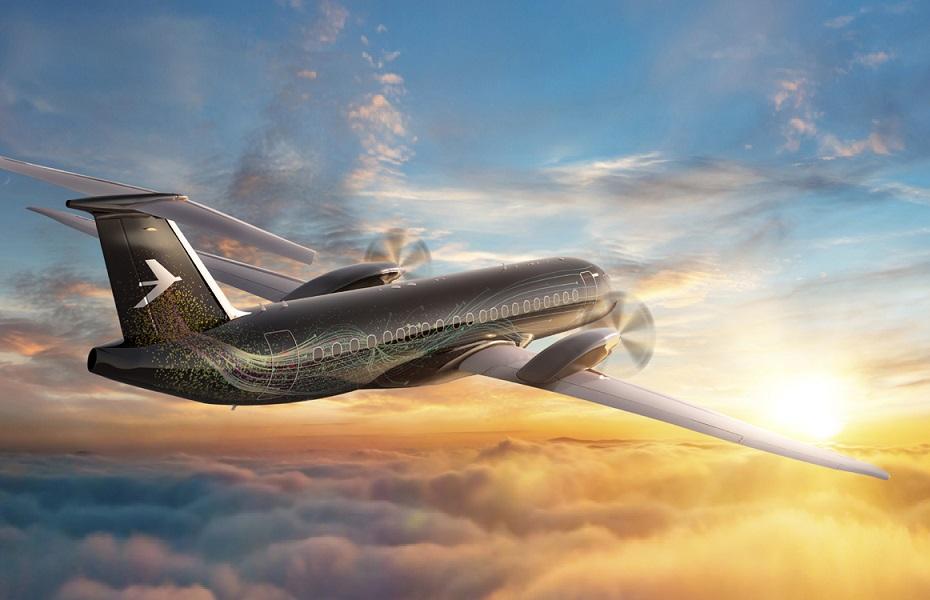 The previous version of the design. Image: Embraer

There are no rear exit doors, making dual over-wing exits necessary. This decision likely has to do with the cabin layout, to reduce overall length and weight. It will be interesting to see if Embraer will retain this feature, in the final version of their new turboprop. The tractor engine layout means that the props should have adequate ground clearance, on rotation.

Embraer will be joining a rather stagnant turboprop market, with its new design. The deHavilland Dash-8 and the ATR-42/72 haven’t been new for a long time. They both got developments and updates over the years, but further potential for improvements is limited. Electrification, hybrids or new fuels could change that – but so could newer designs.

Similarly, the new Russian Il-114-300 turboprop isn’t really new, featuring new electronics, uprated engines and… a Russian factory. But it isn’t likely that this turboprop will feature in the same markets as the new Embraer. The Ilyushin’s low wing gives it a fresh look, but the Brazilian design beats everyone in the freshness department!

The new engine layout means that this Embraer should be much quieter than existing turboprop designs. Noise is a common complaint with turboprops. And while newer engines and propellers promise improvements, moving them to the rear has its merits. Speaking of engines, the rendering doesn’t offer any clues as to their identity. Embraer is probably keeping the design generic deliberately. Upcoming designs from both P&W and GE are possible candidates. 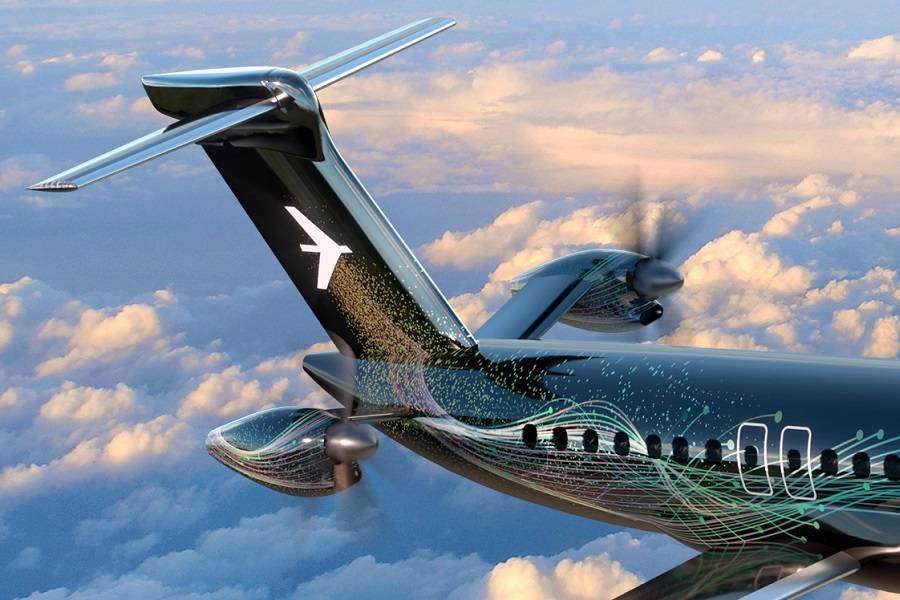 A closer look at the rear layout of the aircraft. Image: Embraer

Embraer has expressed the desire to work with outside partners on this new turboprop. However they’ve made it clear that the partnership will be for the aircraft, not the company itself. The Brazilian manufacturer had a less-than-perfect experience, in trying to merge with Boeing. And at this point, we don’t really know if they are still pursuing a project partnership. Perhaps their finances are giving them new options.

The new design of the Embraer turboprop is something we have had some exposure to, lately. We saw concepts involving new open-rotor jet engine designs, with similar mounting options. Some expressed disappointment that Embraer isn’t considering a design using alternative fuel-propulsion. The company has said that such technologies aren’t yet realistic for a design of this size (50 to 70-90 seats). But new turboprops have much better efficiency than older, small jets. 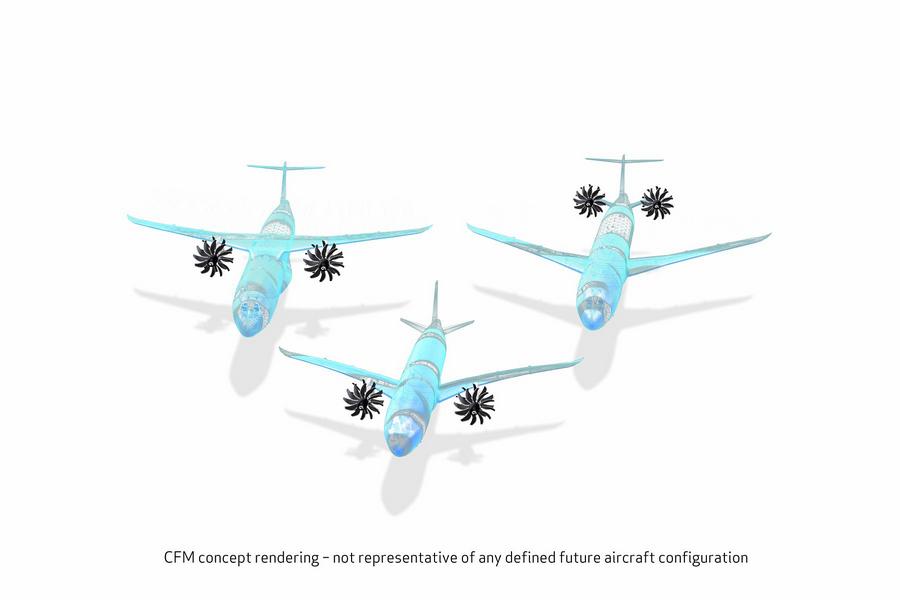 Embraer is actually busy working on an all-electric demonstrator, that we will see in another article. The company makes more than just commercial aircraft, with multiple offerings for military and business-jet customers. The latter sector has been performing very well in these troubled times, as we saw. Perhaps this will drive Embraer’s recovery, and new designs, even faster.