Airbus reiterated its commitment on its plans for hydrogen-powered future aircraft. This comes after Boeing chose a different strategy.

It seems that Boeing’s plans and statements about hydrogen versus sustainable aviation fuel, struck a nerve with Airbus. First, on the 22nd of January, Boeing committed to making its current and future aircraft compatible with 100% Sustainable Aviation Fuels (SAF) by 2030. There was no mention of hydrogen or electric propulsion, in these plans. It was about Boeing making its fleet ready for 100% SAF.

Then on the 27th, David Calhoun dismissed hydrogen as the power source for Boeing’s next aircraft plans, unlike Airbus. Stating that his company has already tested hydrogen aircraft, the Boeing CEO instead talked about 100% sustainable fuels. He pointed out that the company has been developing and actually flying aircraft, using this fuel. He also acknowledged that there is a need to actually make this fuel available:

Clearly, Airbus does not agree with this assessment on hydrogen for its future plans. Airbus also has a different definition, for what constitutes ‘zero emissions’, in aircraft propulsion. The European manufacturer defines different emission levels as ‘Incremental’, ‘Net Zero’, ‘Carbon Zero’, ‘Carbon+ Zero’ and ‘True Zero’. They break down these categories in the graph below. 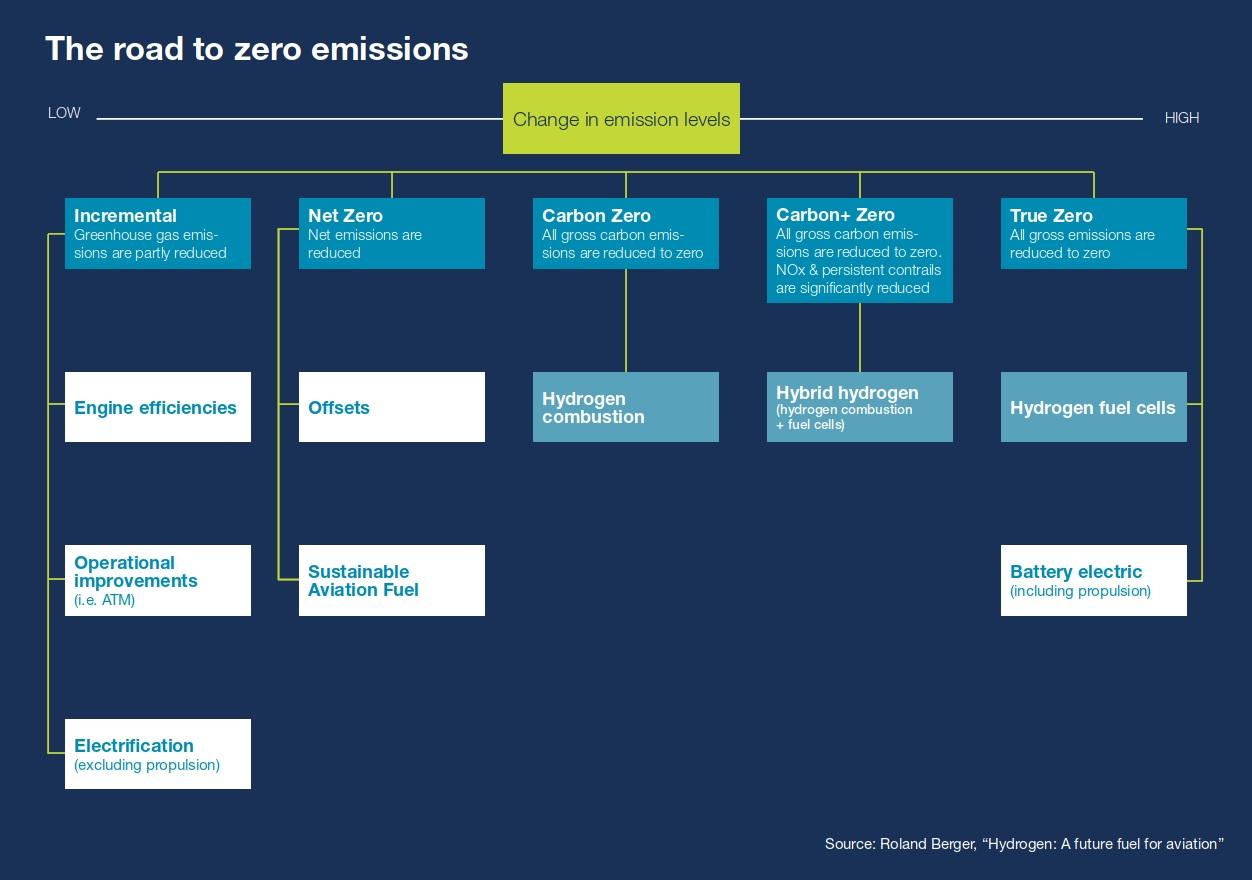 Making engines more efficient and optimizing systems with electricity instead of hydraulics, constitute examples of ‘Incremental’ emission changes. Then Airbus groups  carbon offsets and sustainable aviation fuel together, as ‘Net Zero’ emissions. Hydrogen combustion is next, as ‘Carbon Zero’. And finally, battery electric and hydrogen fuel cells are the only ‘True Zero’ emission propulsion types, in Airbus’ plans. ‘Carbon+ Zero’ sits in-between the last two, as a hybrid of hydrogen combustion and fuel cells.

With battery electric propulsion still not practical for medium and long haul, the above explains Airbus’ hydrogen plans. However, it doesn’t really deny Boeing’s objections to them. To use hydrogen in aviation, Airbus would need to redesign a number of processes, in commercial aviation. And in the same source, Airbus describes some of these processes.

Airbus acknowledges the need to plan “equivalent or better safety levels” in hydrogen use, compared to kerosene-powered aircraft. Hydrogen is already in use in space programmes and is also in use with some cars. But it has a long way to go, before it really reaches mass-production. That brings up the second process, which is infrastructure development for the fuel, covering the world’s airports.

Who Has The Trickiest Supply Chain?

Then Airbus needs to make plans for the availability of hydrogen – specifically, what they call ‘green hydrogen’. Extracting hydrogen from water is an energy-intensive process. Doing so using ‘clean’ electricity, in large scale, has a long way to go. It’s also expensive. Airbus hopes that future mass-production of green hydrogen will make its price comparable with sustainable aviation fuels.

Finally, Airbus hopes for the public’s perception of hydrogen to change, in the future. To that end, they hope that usage of the fuel in public transport will help. Admittedly, this is something we already saw with LPG, compared with the public’s attitudes to it, years ago. And as a plus, the proliferation of hydrogen ground vehicles, could solve some of Airbus’ future sourcing plans.

Grouping 100% sustainable aviation fuels together with carbon offsetting, is more than a little bit harsh. Carbon offsets work by linking two unrelated activities, one ‘good’ and one ‘bad’. Initiatives like these may well raise awareness for emission levels, but in the long-term do little beyond good marketing. 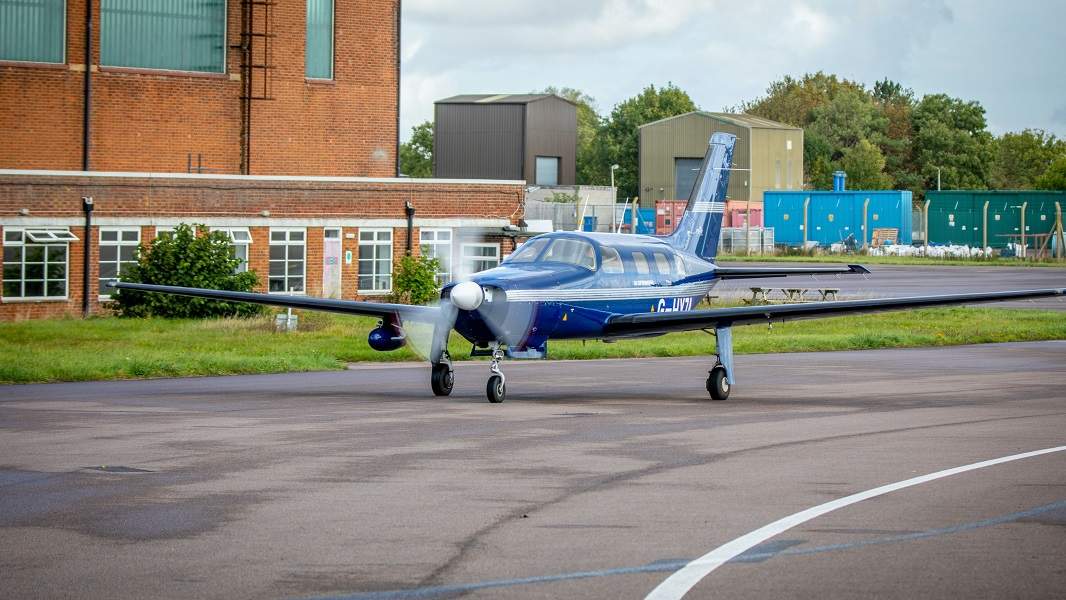 Sustainable aviation fuels, on the other hand, neutralize emissions in the fuel’s production phase. Admittedly, this depends on the source of the fuels. But the same could be said about plans for sourcing and processing of hydrogen, as Airbus describes. Without mentioning Boeing, Airbus implies that ‘Net Zero’ strategies, like 100% SAF, are less than ‘True Zero’ emissions, like hydrogen fuel cells.

With a common 50% reduction goal for CO2 emissions by 2050, Boeing’s future strategy is no less ‘true’ than Airbus’ hydrogen plans. The question is which of the two will be harder to achieve. Boeing’s 100% SAF use is relatively easy, in terms of aircraft technology. But it largely depends on a dramatic shift in supply-chain. 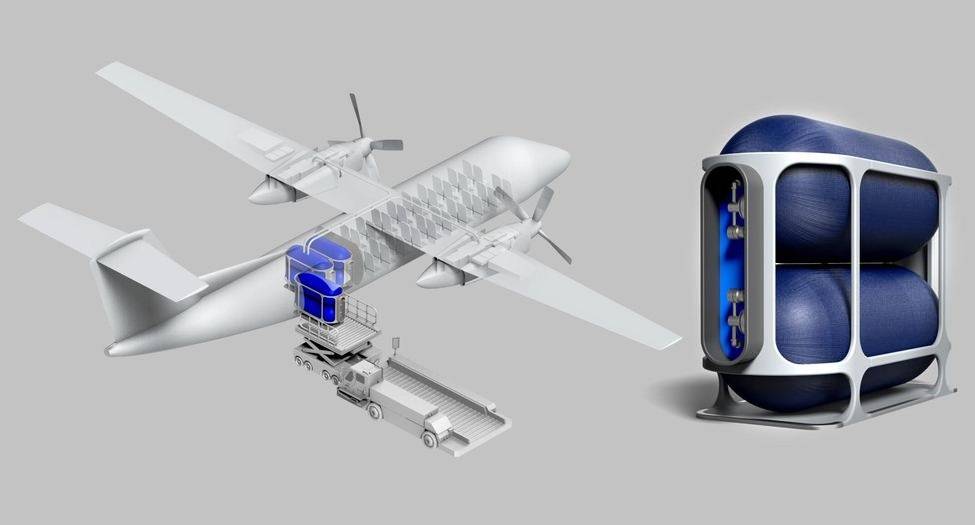 Universal Hydrogen has its own ideas about hydrogen supply

There are already several sources for 100% sustainable biofuels. There is also the intriguing possibility of synthetic fuels, extracting CO2 from the atmosphere. But industrializing these methods could still take time. However, industrializing ‘green hydrogen’ will also require time and effort. And this is beyond Airbus’ challenge of designing and developing working hydrogen aircraft.

Of course Airbus isn’t the only one working on future hydrogen aircraft. But we will see. Finances will obviously matter here, too. Boeing isn’t really able to invest heavily on radically new aircraft technologies at the moment. Airbus is less squeezed financially, but they, too, live in a COVID-19 world…