Computer Power has not only defined the scope of Hub & Spoke and Point-to-Point airline operations. Computers literally shaped entire airline fleets. This article looks at how airlines bounced back and forth between the two systems, in large part because of computer power.

We have already discussed what Hub & Spoke and Point-to-point systems are. If you’re not already familiar, the names are fairly self-explanatory. To clarify, Hub & Spoke systems often have more than one hub airport, but even then they have many more spoke airports. Conversely, not all served airports will really connect with all others, in a real-world point-to-point system. But you get the idea.

Hub & spoke today is the ‘legacy’ system, but point-to-point actually preceded it. Only it wasn’t called ‘point-to-point’ it was simply what airlines did. In the post-war 50s and early 60s the airline industry was booming. New, more efficient aircraft appeared more frequently, alongside WWII old-standbys like DC-3s. New routes were decided on the fly, as were their prices. Working out precise break-even points for every route, with varying weather conditions and passenger loads, wasn’t really a thing yet. Technology leaped forward before airlines could fully understand it. 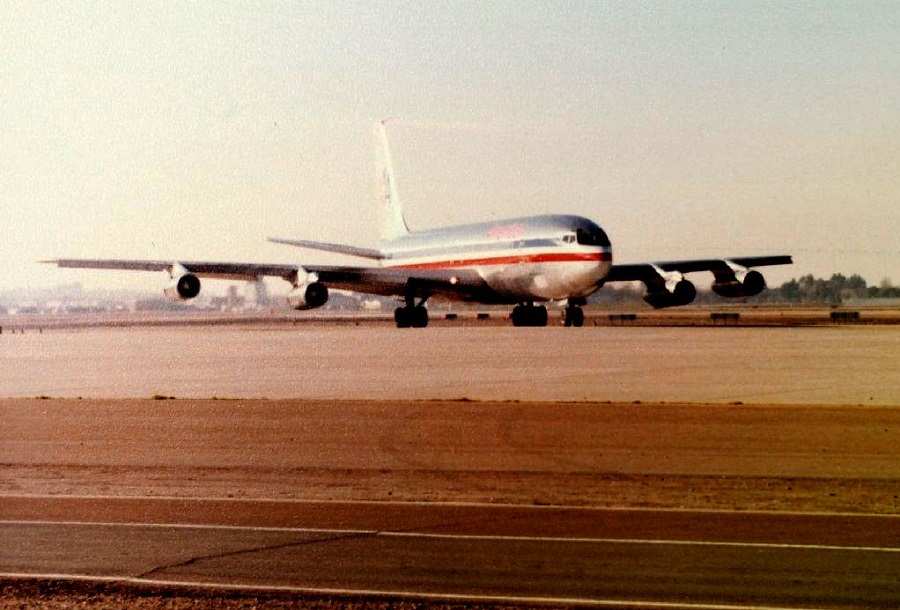 Those jets impressed those who saw them (and heard them), but they operated next to DC-3s for years…

Inevitably, the system was inefficient. Sometimes planes flew half-empty, sometimes flights booked up weeks ahead of schedule. But it didn’t matter, it was part of doing business. It seemed obvious that high-demand flights should be priced higher, but this was easier said than done. When an airline has several flights a day, from any given airport, and it has to monitor their progress weeks or months ahead, any manual reservation system will quickly get overwhelmed.

This was the first instance when computer power came to the fore. Starting in the mid-sixties, American Airlines had already introduced the Sabre electronic reservations processing system. More airlines followed with similar systems. Most of these (including Sabre) run on IBM computers, and there was plenty of technology transfer between airlines.

This was essentially a primitive phone-based network. But as its name suggests, back then this was all about reservations, not pricing. Computer power had a role in making sense of the thousands of names travelling every day. But that’s about as far as it got, for a while.

Realising that the airline system would need some streamlining, Delta pioneered the hub & spoke system already in the 50s. Not everyone caught on immediately. Many airlines didn’t wake up to the system’s benefits until the 70s. To better understand what it meant, a couple of simple diagrams might help. 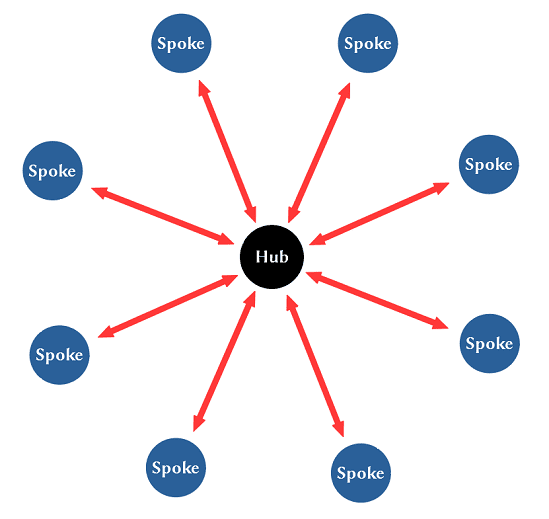 The first is a Hub & Spoke system: one hub, eight spokes. There are eight routes possible in this system – so sixteen total, including the return legs. Nice and easy… well, not quite. Each destination may have multiple flights per day. If these are overlapping, time-wise, the airline will need more than one aircraft per spoke. That’s one consideration, another being price. The airline will announce each individual flight months in advance, opening it to bookings.

Monitoring Prices – A Lot Of Prices

As each flight fills up, the airline might decide to increase the price of the remaining tickets, if they sell too fast. Conversely if the flight approaches and there are few sales, prices will have to go down. There are more parameters, but try to picture just these. Remember: each flight opens for bookings months in advance. The airline has to track its progress every day. For months. And each spoke may have two or three flights per day.

Also, the airline would need to research any notable events happening seasonally. A big convention in one city will increase demand. Business conventions will cause high demand on weekdays, less so on weekends. The start of a holiday will likewise increase demand, but more towards weekends. Does this seem complicated? OK, now look at the same destinations, with a point-to-point system, below. 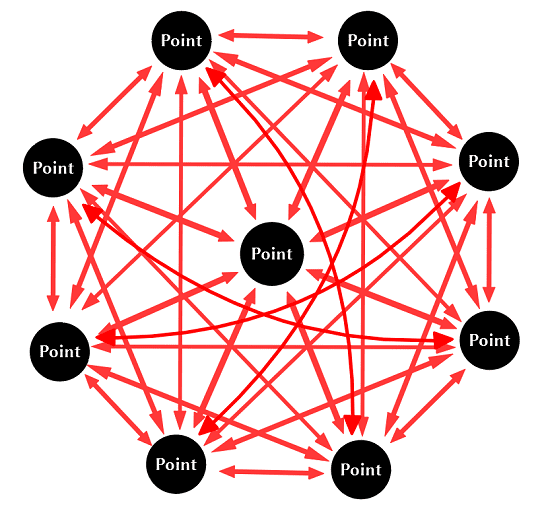 Previously we had 8 pairs of connections. Now we have 36. That’s not entirely realistic, since not every destination pair would really need a link. Even so, this very messy diagram gives you a clue as to why airlines avoided this system for years. They simply didn’t have the computer power to make all the previous calculations, for each of these flight destinations, daily, starting 6+ months in advance.

In the real world no airline would have only eight spokes per hub airport. So even the simpler system would be very complicated, if run manually. With a few assumptions and some trial & error, computer power could handle the hub & spoke system – eventually. But even before, people were trying other strategies.

Low-Cost Carriers And Other Ideas

Low-cost airlines, like Southwest, generally stuck with the point-to-point system, with a careful selection of city pairs. At first, a limited network with some simplifications in planning (a homogenous fleet, for one) did the trick. Eventually low cost airlines started to grow and this became harder. But with simplifications elsewhere in the process and by throwing people to the problem, they persevered. Mistakes weren’t rare, but the system worked. And then, someone had another idea, that pushed the need for computer power even higher: a fleet with varied capacity. 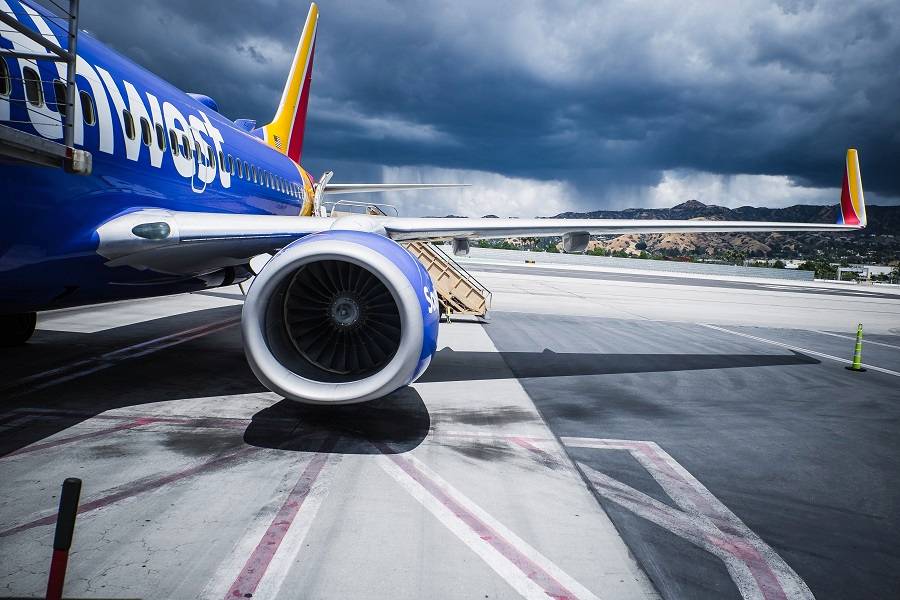 Boeing had one length of 737 until the late 80s. They also had the 727, for those who wanted something bigger. Then the 737-300/400/500 family came in. This gave airlines the option of multiple versions of the same jet, to use for different demands between routes. The concept continued with the 737NG series. Even before then, Air France, as we saw, took this concept ‘in extremis’ with its Airbus A318/319/320/321 fleet.

This of course complicates the system further, but Air France was careful. Rather than be aggressive, they simply picked one aircraft type per route. They they used the additional flexibility of being able to swap a bigger or smaller jet, to fix unexpected variations in demand. Pricing was still the main tool to control demand, but the varied fleet eased the demands on computing power, used only when intervention was necessary.

It worked. Air France was quite profitable in its short and medium haul operations, compared to other flag carriers. But time was passing, computers were getting more powerful and eventually, the flexible fleet wasn’t the advantage it once was. Other factors, like quick turnarounds and scheduling, became more important for efficiency.

The development of computer power in the late 80s and early to mid 90s got some press from an unexpected source. The story isn’t quite true but like all good plots, a substantial-enough real connection exists, to give it plausibility. IBM was still the major computer supplier, for the airlines booking and scheduling systems. IBM at that time got a bit of publicity by organizing a couple of chess matches with Gary Kasparov.

‘Deep Blue’ was the first computer to play the chess-master, and lost. The improved, ‘Deeper Blue’ won. Some controversy aside (about whether or not the computer had a human ‘aide’), the story then was that the ‘Deeper Blue’ computer was sold to United or some other airline. This didn’t really happen. ‘Deeper Blue’ didn’t even stay together as a single computer – it was a mainframe, comprising of multiple units. But IBM was indeed using similar computer infrastructure, with similar power, for the airlines, at that time.

And this was a mid-90s mainframe. Very powerful, but ultimately, simple. It didn’t use what we now call ‘machine learning’. This is the ability of a computer to recognize patterns and trends. Incidentally, such a computer beat two other top chess-masters a decade later, even though it theoretically had less than 1/10th the capacity of the one that beat Kasparov. And the airlines ARE using such computers.

The computers airlines have are almost as powerful as these things

So basically, now computers have so much power that they can easily keep up with the aggressive pricing strategy that low-cost carriers and other airlines need. This makes a very varied fleet, like Air France’s A320 family, unnecessary. Airlines can now simply use their computers to monitor the way demand for flights evolves. Second by second, and seat by seat.

Air France’s single-aisle fleet will be simpler in the future.

Ever noticed that the flight you price-checked an hour ago, 4 months in the future, got pricier 10 minutes later? One explanation for that is that it’s YOUR fault! The airline’s computer saw your on-line search, checked and recalculated and decided you’ll probably pay another $20-60 each way. Some people also try to guess when to book tickets for their next summer holiday. Maybe last year tickets got cheaper after they booked, so this time they’ll wait a bit…

If that is you, be careful. This is essentially like the stock market: past performance doesn’t guarantee the future, etc. Wait if you want, but just know that you are playing poker against a computer with oodles of power. And this computer has been playing the game longer and more often than you do. And like the casinos, this house definitely wins, too.