There was an incident with the first MC-21 prototype today, when it had a runway excursion. Despite early reports, it was NOT a runway overrun. There were no injuries among the test pilots and other crew.

The incident took place in Zhukovsky airport, near Moscow. These days the facility is a commercial airport. In previous years, it was a military installation and the location where most aircraft testing took place. This is a role that Zhukovsky still fulfils today. Tests for the MC-21 prototypes, including the one in today’s incident, take place there. The Ilyushin Il-114-300 prototype also first flew in the same facility.

Because of its testing role, Zhukovsky has one of the world’s longest runways, at 4,600 metres (15,092 feet). For reference, the Space Shuttle Landing facility in Cape Canaveral is 4,572 metres, or an even 15,000 feet. This makes Zhukovsky for testing things like aborted takeoffs. And this is what the MC-21 prototype was doing, during its Monday incident.

Pictures and video from Russian media showed the aircraft stopped, in snow. It is not clear if (or how much) the engines of the MC-21 dragged along on the snow during the incident. There is no apparent damage to the aircraft in the pictures or video. We can see that it is prototype 001 of the MC-21-300, with Pratt & Whitney geared-turbofan engines. One engine appears to have its thrust reversers in the open position. 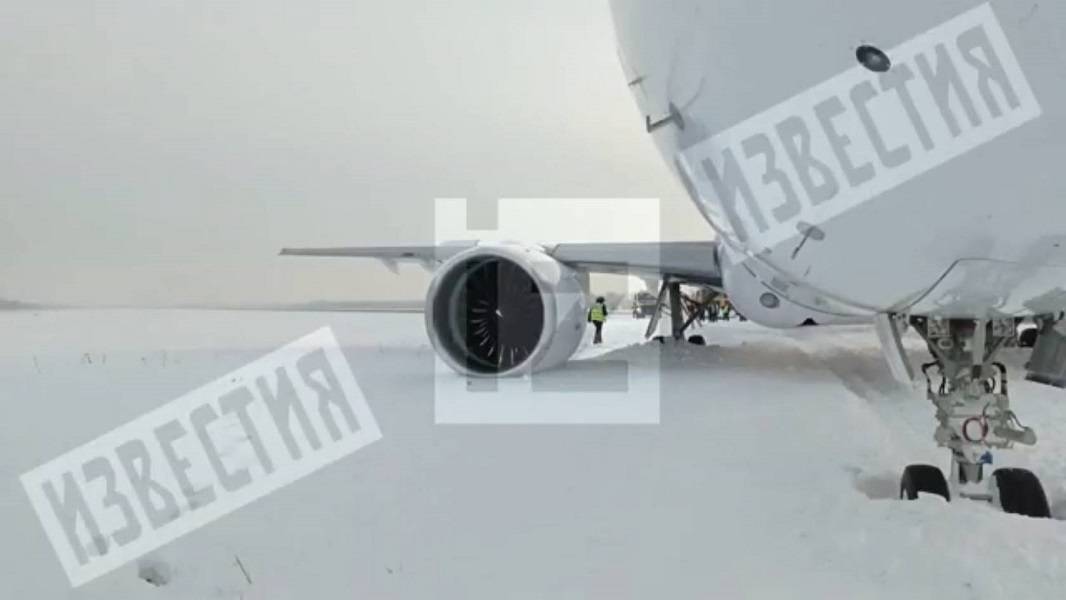 An announcement from United Aircraft Corporation (parent company of Irkut, the manufacturer), gave more information on the MC-21 incident:

“During tests for an aborted take-off with the use of emergency braking and a simulated failure of one engine, the MC-21-300 rolled out of the runway. The crew was not injured. No visible damage was found. No system failures were recorded. The reasons for the incident are being investigated.”

A better look at pictures of the incident, shows that the MC-21 is beyond the left side of the runway. The No1 (left) engine is the one that has the thrust reversers in the open position. Obviously there is plenty of snow, including on the runway. We can’t tell if there is any ice under it, unfortunately.

The same prototype, in a somewhat warmer environment

We also don’t know the speeds the MC-21 had during its incident. It’s a safe bet that this was a high-speed aborted-takeoff test. However we don’t know at what speed the aircraft veered off the runway.

It will be interesting to see if the incident interferes with the MC-21’s certification. Irkut aims for this to happen in 2021. Initially it will be with the P&W engines. The first MC-21-310 (with Russian engines) flew last December. So far Irkut has produced four prototypes of the MC-21-300, and one MC-21-310.