As its name suggests, KLM Cityhopper is the airline’s wholly-owned regional subsidiary. They work as a feeder for the airline, who themselves are part of the Air-France/KLM group. The airline began its operations with a fleet of Fokker and Saab aircraft. Then from 2009 they began renewing their fleet, with the newer Brazilian jets. KLM’s new E195-E2 is the 50th Embraer in their fleet. They have 17 E175 models (88 seats) and 32 190s (100 seats). 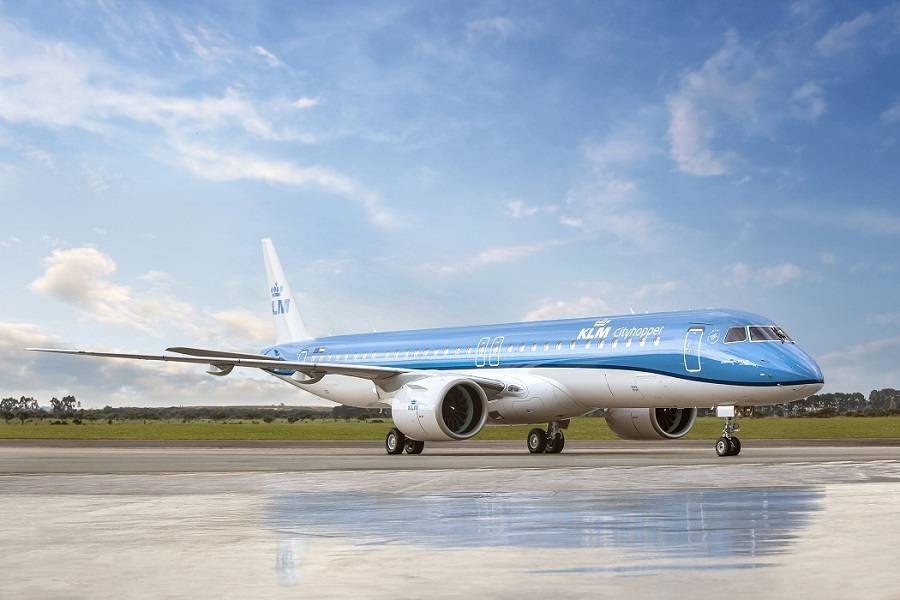 The airline originally ordered 21 aircraft directly from Embraer. In the end, the airline agreed to lease these aircraft from two lessors. More recently, KLM exercised four more options, bringing its total order for Embraer E195-E2 jets to 25. They have 10 more options. And the new aircraft have a lot of advantages, making them very relevant to the Dutch airline.

As already mentioned, KLM only operated the smaller Embraer E190 and the even smaller E175, before the E195-E2. This means that Cityhopper’s newest aircraft is also their biggest. With E2 models being a bit bigger than their equivalent originals (now called ‘E1s’), the increase for KLM is substantial. Their E2 has seats for 32 more passengers than their E190s. But crucially, the fuel consumption of the new jets doesn’t mirror the increase in size. Quite the contrary. 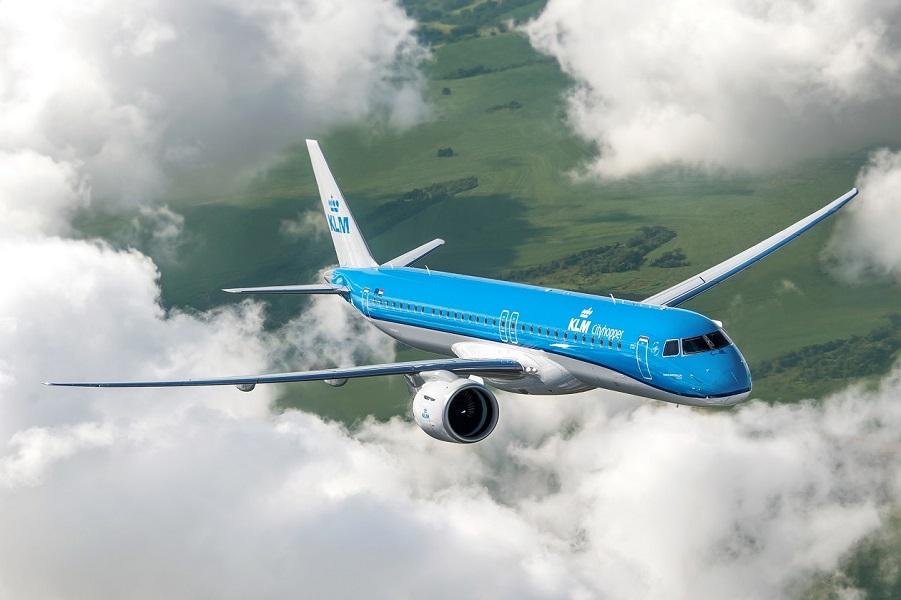 Secondly, this gives the airline much more versatility. The lower per-trip fuel consumption means that with the E195-E2, KLM can still replace the smaller Embraer efficiently. In other words, even if they only fill the new planes to the same capacity as the older E190, they will still burn less fuel per passenger! And this also means lower emissions. 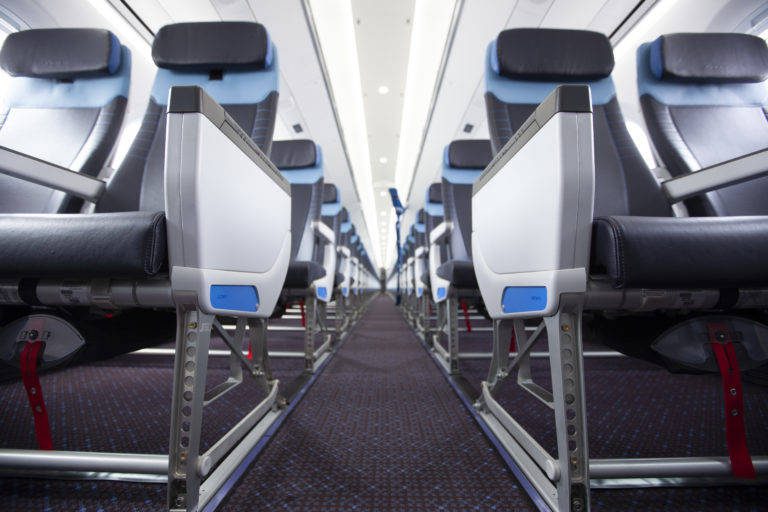 Additionally, the new planes are quieter. This is probably not a huge deal for some regional airlines in the US or elsewhere. But for KLM Citihopper, it means avoiding some restrictions on how they can use their E195-E2 fleet. Schiphol and other airports have strict noise abatement procedures. And Embraer claims a 60% smaller noise footprint, for the new aircraft. KLM say that the new planes are 48% more silent. Whichever way you choose to measure it, it’s a big reduction.

So how does the new version achieve this better efficiency? Usually the obvious answer would be “new engines”. But here this is only part of the story. KLM’s E195-E2 and the rest of the Embraer E2 family have new Pratt & Whitney Geared Turbofan (GTF) engines. The two bigger models in the series have the PW1900G, the smaller E175-E2 will have the PW1200G. Different versions of the same engine also power the Airbus A220, and some A320neo models. The A220, in particular, is a rival to the new Embraer. 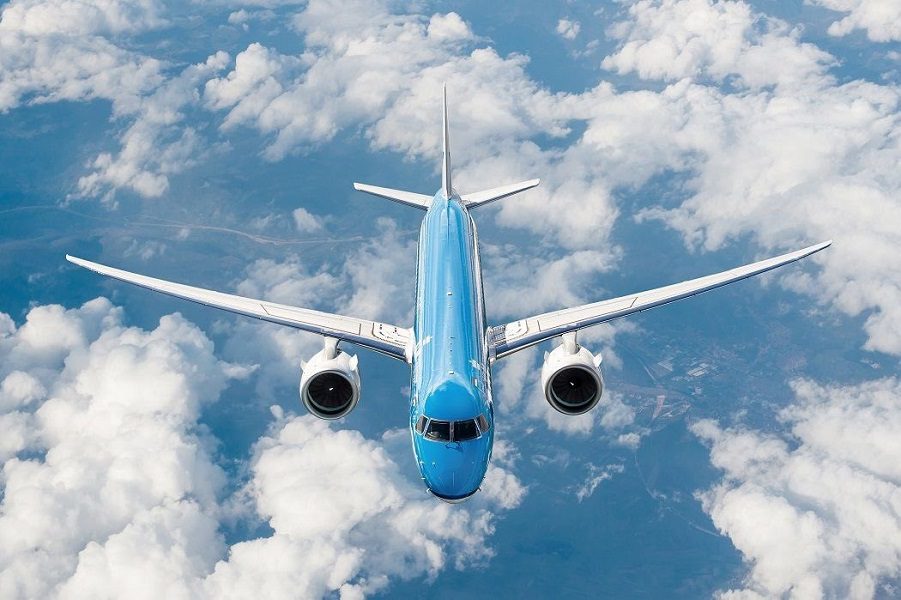 Much More Than A Re-Engined Plane

But only about two thirds of the Embraer’s improvement in efficiency actually come from the engines! KLM’s new Embraer E195-E2 isn’t a ‘simple’ re-engined version, like the Airbus A320neo. The aircraft has more differences, in its wing, its tail surfaces, landing gear, and avionics. The landing gear is taller, to accommodate the higher by-pass engines. The gear rests in a brand-new wing. This has a ‘gull-wing’ shape, that also helps create room for the engines (see above).

The high aspect ratio wing is a big part of why the plane is more efficient. But the planes now also have fly-by-wire. This allowed a reduction in the size of the tail surfaces, reducing drag. It also means that there is now less downward force from the tail, bringing a small increase in overall lift. This allows cruise at higher altitudes, helping efficiency further. Finally, the fly-by-wire itself allowed a weight reduction. 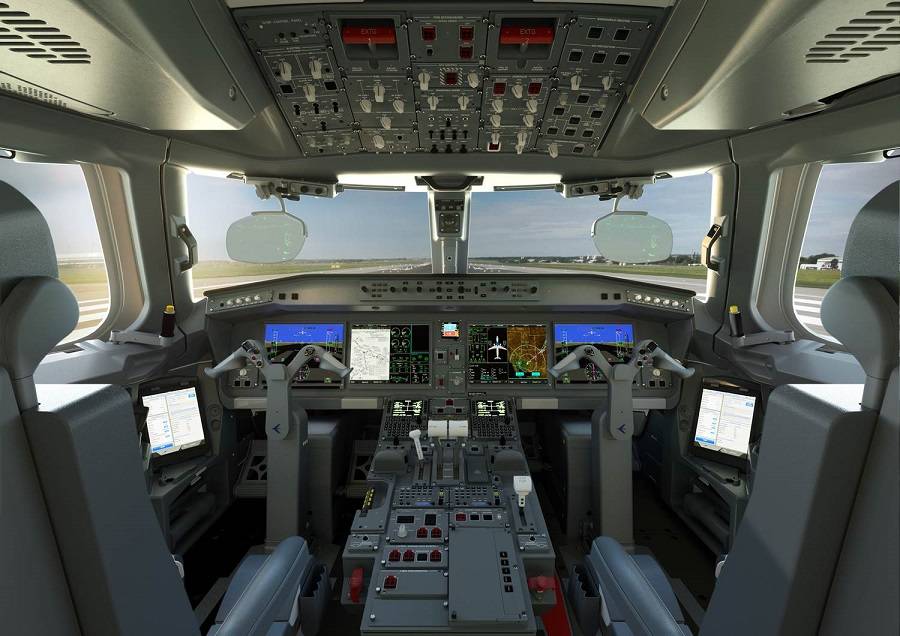 Originally, the manufacturer wanted a clean-sheet design, to replace the E-series and compete with the Bombardier C-Series (now A220). Embraer finally decided on the E195-E2 and the rest of the E2 series, making KLM and other operators happy. The plane is similar enough to the previous generation, and remarkably efficient. And despite the addition of fly-by-wire, it still shares the same type rating, albeit with a requirement for sim training.

Ironically, Bombardier was looking mainly to compete with the Airbus A320, not the Embraer E-series. With that plane now wearing an Airbus badge, Embraer is alone in covering the regional-jet market.

However on the small side of that market, their enlarged E175-E2 won’t fit the American market very well. But with customers like KLM looking forward to their E195-E2s, perhaps Embraer is thinking forward, about turboprops.