Why are aircraft intercepted by Fighter jets? Booms over London

In the Early morning of December 1st, people in London was woken up by the sound of distinctive booms. Several calls were made to local emergency services but it was quickly established that the booms did not come from any criminal activity but rather from two fighter-jets, breaking the sound-barrier, whilst scrambling to intercept a Civilian Aircraft on its way from Germany to the US.

How is the sky divided?

So why were these two Typhoon fighters in such a hurry and was there any threat to safety? In order to understand this you have to understand how the Airspace structure works between countries and how aircraft move between one Air-traffic-Controller to the next. The airspace over the globe is divided into small sectors called FIR’s (Flight Information Region). Sometimes there might be many Air Traffic Controllers operating inside the same FIR and the amount of controllers depends on the traffic intensity.

The reason it is divided into different sectors is both because of the physical reach of individual radio transmitters and the amount of traffic that can communicate effectively on one frequency. To put it simply, if all the aircraft flying over London would share the same frequency, there would be no way that they all could communicate since they would all share the same time and radio calls can happen in parallel. It would sound like a Spanish restaurant at lunchtime with constant interference.

Because of this, and the fact that all Countries have control over their own airspace, the aircraft have to constantly remain vigilant and listen out for instructions to change to a different frequency to talk to the next controller. If a crew would miss such a call, the Air traffic controller (ATC) would try several more times to contact the aircraft. If there still is no response, ATC will try to contact the aircraft on the international emergency frequency 121.5Mhz, which all aircraft should have tuned on their secondary radio onboard.

Why does this happen? (my video on the subject) 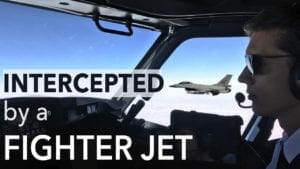 The reason that a crew would miss calls like this could be many, but in most cases its because of distractions like discussions, crew turning down the volume to speak to cabin-crew or just inactivity so the aircraft has flown outside over radio-coverage at the time of the call. The airlines normally have robust SOP;s (Standard Operating Procedures) to keep this from happening but sometimes it happens anyway.

If ATC have tried to get in contact but there is no response, the military will be informed of the situation. The reason for this is that there is no way for ATC to determine if the aircraft has “gone silent” because of a mistake by the crew or by hostile interference. Ever since 9/11, the treat of terrorism using aircraft has been painfully obvious for anyone and no one want to see that repeated. Because of this the military jets will be scrambled whenever a PLOC (Prolonged Loss Of Contact) event occurs. The military jets will scramble and as quickly as possible intercept the aircraft to check if they can establish visual contact with the pilots onboard or confirm an actual terrorism attempt.

What are the procedures?

There are very clear international procedures for how Pilots, who are being intercepted, should act in order to respond to the presence of military jets. The pilots will flash the landing lights and in some cases rock the wings to tell the military jets that they will comply with their instructions. The first thing the pilots will do however, is to try and contact the military on the emergency frequency 121,5Mhz. If contact can be established, the military will verify that everything is OK and will then leave the aircraft to continue their flight often followed by a heavy bill, sent to the airline in question if the PLOC is due to crew negligence.

Could the reason be technical?

There are, of course, times where the pilots are experiencing actual problems with their radios. If such a situation would appear, the pilots will set a specific code in their transponder (a small radio device used to identify the aircraft). This code will tell ATC that the aircraft is not responding due to radio problems and it is then up to the local authorities to decide if they want to dispatch fighters or not. The pilots will follow established procedures for “loss of radio contact” and normally continue according to their filed flight-plan to land at their destination.

So the Sonic booms that were heard over London this morning was part of this well established procedure. The reason they had to go super-sonic is that the aircraft had entered into UK airspace without radio-contact and the time to intercept to establish the reason,was very short. If you want to know what a Sonic boom is, click here

If you enjoy getting things like this explained in detail, in a fun and understandable way, then visit my Youtube Channel, Mentour pilot or download my FREE Mobile application Mentour Aviation