The worst feeling you can have after landing.

I decided to write this post after having seen a video of a KC-46 tanker making a very tight approach into the Paris Airshow yesterday. The aircraft made a very tight left turn to align with the runway at about 100 feet for landing but the crew overshot the centreline and used those last 100 feet, trying to get back into a correct alignment to land. The crew eventually got down on the ground, made a firm touchdown and a short landing roll.

This brings me to my point with this article. The worst feeling I have ever had, after a successful landing, is knowing that the landing shouldn’t have happened in the first place. That feeling is absolutely horrible and, if you are like me, it will stay with you for days. So why do we pilots find ourselves in situations like that? 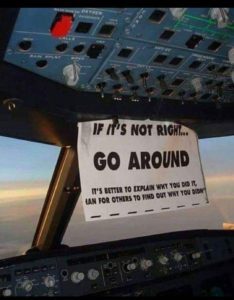 Pilots, tend to always be goal-oriented. This means that we have a bias for trying to fix a un-stabilised approach, even if we deep down inside know that the safe and correct thing to do, is to Go-around . This is a human trait that comes from deep within our personalities and it’s either enforced or worn down, depending on the type of training and safety-culture-thinking we receive from our companies.

Any pilot with a little bit of experience will have a memory of an approach and landing that, it they could do it again, would have led to a go-around. It might have been questionable visibility, late configuration of landing flaps, high speed or a too late touchdown. A landing is, at the end o the day, up to the pilots to decide on and still leaves quite a large room for discretion.

In my company we get told, over and over, that there is a “no-blame” policy for Go-arounds. This might sound obvious but it is a VERY important policy to have and to constantly remind pilots of. When pilots think “go around?” the next thought should always be “no-blame” followed by “call it!”. In almost all circumstances, if a pilot thinks the word “go-around” it is the correct thing to do! We very rarely start thinking of go-arounds if the approach is progressing nicely.

Remember that there are very few companies that will ever thank you for landing from an un-stabilised approach.

The Pilot Monitoring (PM) plays a huge role in stopping approaches like this from happening. The Pilot Flying tends to be inclined to try and “fix” the approach, no matter what it looks like. Him or her could be finding themselves further and further down the “stress cone” as the approach starts to unravel and might, in the end, not even think of go-around as an option even though it should be the obvious thing to do. The Pilot Monitoring on the other hand, should be “monitoring” the situation and call out any tendencies as it happens. As Pilot Monitoring you will have less things to do, hence your workload will be less and making that crucial call; “Go-Around” should come easier and MUST do so.

But in some cases it still isn’t as easy as that. Maybe the cockpit gradient is very high and a young fresh first officer might feel uncomfortable in calling a “go-around” on a senior training captain. Maybe the company culture is such that it makes it hard for the Pilot Monitoring to speak up. It is hugely important that any flying organisation works hard on empowering the role of the PM and especially when the PM is the First Officer. In my role as a TRI/TRE as well as a Line training Captain for my company, I have always been proud over how clearly this has been communicated.

This is also where our pride in our job as well as the role of Standard Operating Procedures comes in.  Any pilot worth her or his salt should be willing to call out an unsafe tendency no matter when or to whom it happens. This has to be a fundamental part of the training and the strength of the personality of any pilot. The Company SOP’s has to provide tools, such as a mandatory Pilot Monitoring “500 ft continue/go around” call on every approach, that MUST be obeyed. Modern tools such as Operational Flight Data Monitoring systems, that monitors the flight parameters and looks for unsafe tendencies, will also help pilots with questionable decision making skills, to make the correct decision. I remember feeling hugely empowered, as a first officer, when the OFDM system was introduced.

A go-around can also be a scary thing to do. In a lot of cases, pilots might not have done an actual go-around in the real aircraft for months if not years. I have even flown with first officers, who are approaching command hours, without having done a real go-around. You might be surprised to hear that but given the enhancement of SOP’s and general tendencies to err on the side of caustion leads up to very few actual go-around in commercial aviation. Obviously Go-arounds are vigorously trained in the simulator every 6 months but it does mean that a real go-around, in the aircraft, could induce a great deal of stress when it happens and that stress, or the perceived onset of that stress, could stop pilots from initiating it.

If you ever find yourself in this situation, pondering wether a go-around is the right thing to do, remember this; I have NEVER regretted a single go-around in my career but I HAVE regretted landings.

Have a great and safe day out there my friends! 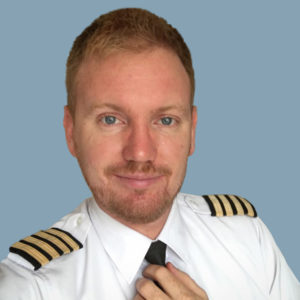