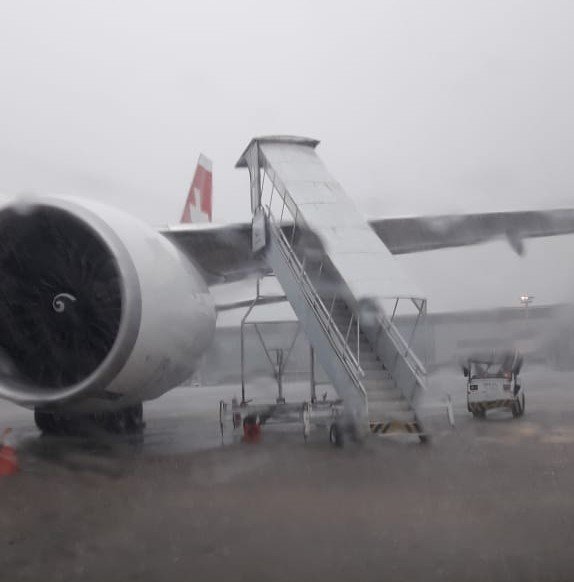 Some more light-hearted news for your evening: A Swiss Airlines Boeing 777 suffered wing damage after it was hit by airstairs following a violent storm at Sao Paulo International Airport in Brazil. No passengers were on board the aircraft at the time of the incident – the aircraft was being turned around.

The Knock On Effect:

The Boeing 777-300ER with registration HB-JNK, suffered leading edge damage after the stairs hit the wing of the aircraft. As a result, Swiss flight LX93 to Zurich, which was scheduled to be operated by the same aircraft, was cancelled.

In a statement to MentourPilot, the airline said:

“Due to the heavy rains that affected the entire metropolitan region of the city of Sao Paulo yesterday afternoon (10/20), the SWISS Boeing 777 was hit by a ladder while it was parked in the aircraft yard of Guarulhos Airport. There were currently no passengers or employees on the plane.”

The airline also stated that passengers of flight LX93 were allocated on Lufthansa’s flight LH507 to Frankfurt to ensure the best possible experience and lowest achievable wait times for them on their onward journey.

The aircraft is currently still on ground at Sao Paulo. A spokesperson for Swiss clarified that the aircraft was being inspected by the maintenance team and following any required maintenance would resume into service early next week.

Have you been affected by a ‘tech error’ like this before? (the technical term for these such delays) – Let us know YOUR experiences down below!