After the pilot fell unconscious, a passenger successfully landed a Cessna Caravan turboprop in Florida. And it very nearly ended in disaster from the start!

“I’ve got a serious situation here about the pilot, he has gone… incoherent and I have no idea how to fly the airplane but I’m maintaining 9,100.” 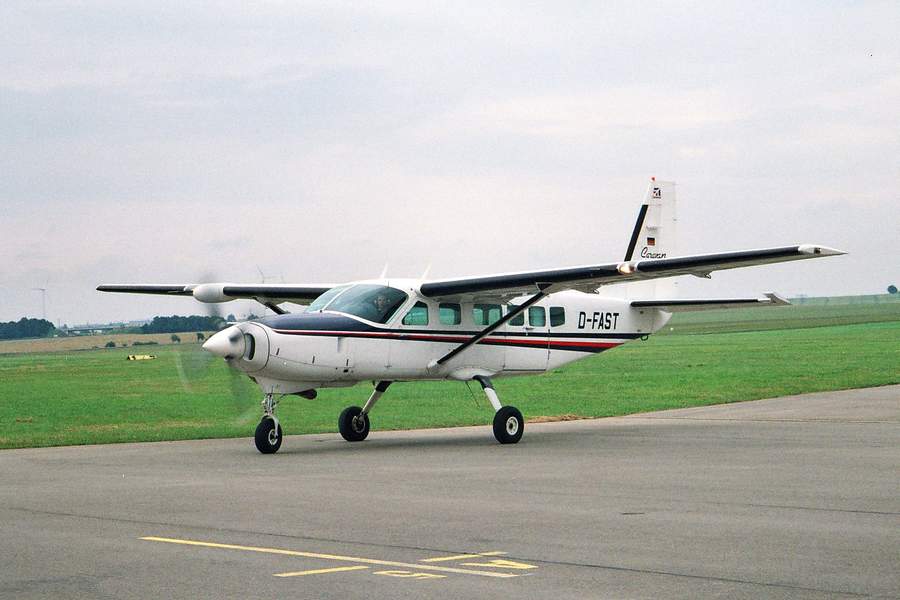 That’s not a radio call that controllers want to hear – and thankfully, most of them never do. But this is exactly what Tower controller Christopher “Chip” Flores heard on Tuesday the 10th of May, around noon local time. This controller was at Fort Pierce St. Lucie County International (KFPR) in Florida, USA.

The person on the radio was a passenger, on board a turboprop Cessna Caravan 208. He spoke in a very calm voice, which is extraordinary in itself. But it is made even more extraordinary, given what preceded this introductory conversation. We don’t know the circumstances that led to the unfortunate pilot’s incapacitation. But we do know that the passenger had already pulled that Cessna turboprop out of a steep dive. 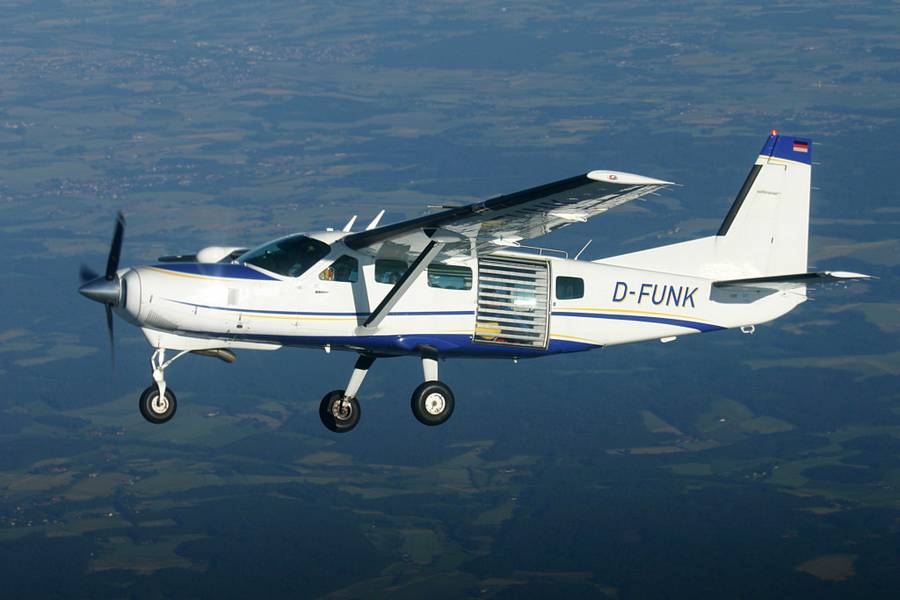 Passenger Gets Turboprop Under Control

This flight originated at Marsh Harbour Airport (MYAM) in the Bahamas. Its destination was Fort Pierce – which explains why the radio was already tuned to its tower frequency. Unfortunately, it seems that the pilot had not checked in with the tower yet, since the incident happened over 60 nautical miles away. So the controller had no idea where the passenger and the turboprop were.

That is why the controller asked the passenger where he was. The passenger replied: “I have no idea. I see the coast of Florida in front of me, and I have no idea.” He didn’t think to mention that the flight departed from the Bahamas, so the controller assumed that the aircraft was already somewhere near Florida’s east coast. The aircraft was then still at least 50 nautical miles away from the airport and around 25-35 nm away from the coast. 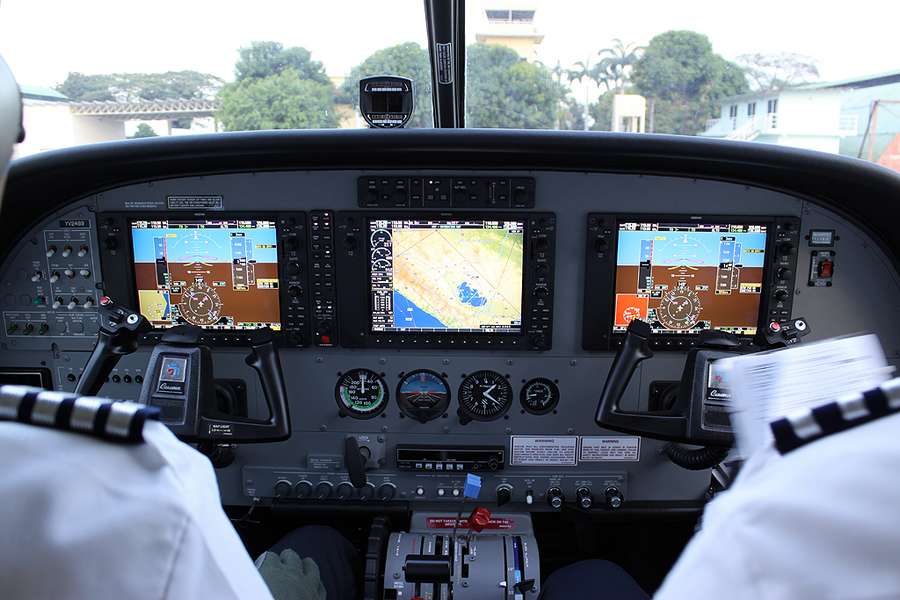 Also, at this point, the passenger hadn’t turned the turboprop back towards the coast yet. This made the job of identifying it harder. But very quickly, a lot of controllers in different locations were scrambling to identify and locate the aircraft. One of them was Joshua Somers, the operations supervisor at Palm Beach ATC facility, who eventually tracked it.

Before the emergency, the Cessna had been on a track of 285 degrees, heading for Port Pierce. Initially, the aircraft cruised at 12,000 feet but had descended to 10,000. The consistent lines we see on Flightradar24 suggest that the aircraft was on autopilot.

A Dive, Then Fighting The Autopilot?

But around 52 nautical miles south-southeast of Fort Pierce, the aircraft’s pilot told the two passengers on board that he wasn’t feeling well. He then collapsed, pushing the yoke forward. The aircraft immediately entered a very steep dive. From 10,000 feet and around 154 knots (ground speed), it got to 6,200 feet and an alarming 295 knots (also ground speed).

So the aircraft lost nearly 4,000 feet in around half a minute. Fortunately, the passenger managed to pull the turboprop out of the dive, without overstressing it. Afterwards, the aircraft’s altitude was much less consistent, between 8,500 and 9,200 feet, indicating manual flight. The passenger was now flying, with no prior experience. But in addition to this, he had another challenge: the autopilot. 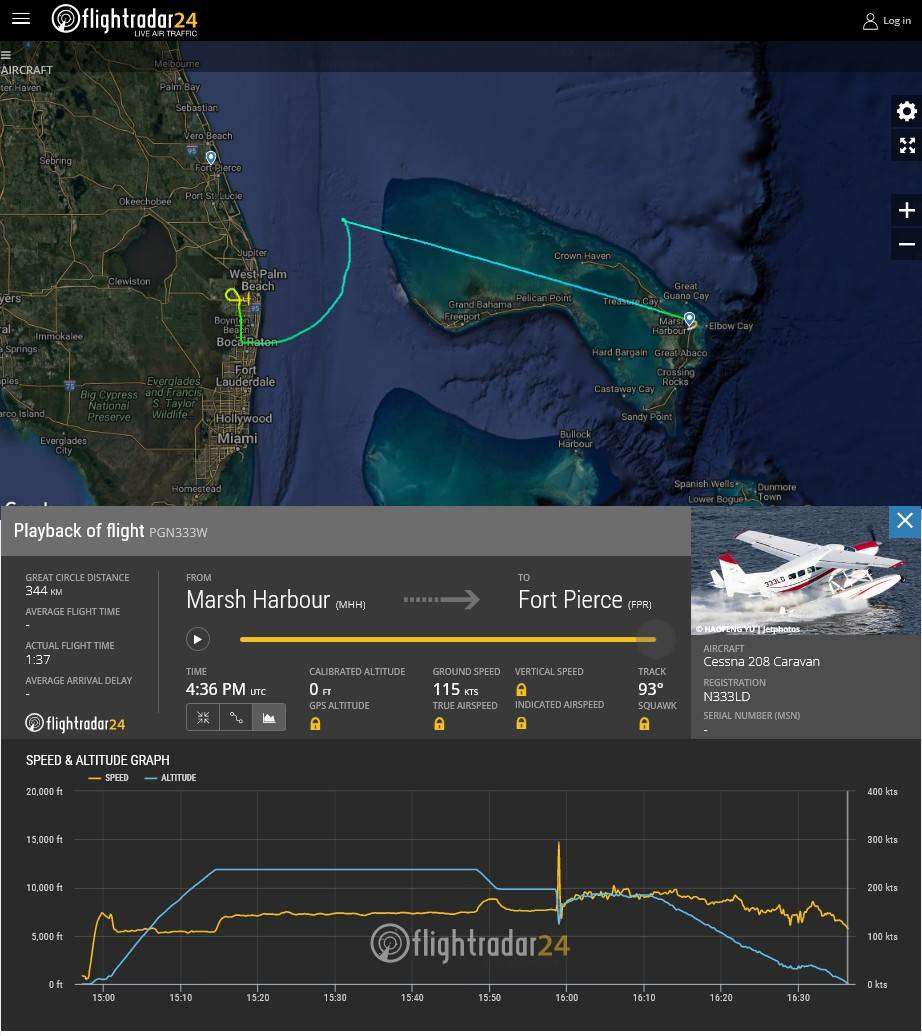 The dive and turn meant that the aircraft had turned to a southern heading, initially around 160 degrees. And it was soon after this that the passenger contacted ATC, informing them of the situation, and that they were at 9,100 feet. But he soon added that “All my electronics want to make me to roll“. This suggests that the autopilot of the Cessna turboprop was still on and trying to turn the Cessna back towards Fort Pierce, fighting the passenger!

It was around this time that the controllers managed to identify the aircraft. Soon, the passenger was talking with the tower at Palm Beach International (KPBI). At first, the passenger wanted to go to Fort Pierce. But Palm Beach has much longer runways and perhaps better rescue facilities, as well. So this is where he and the other passenger went to.

Before the incident, a controller named Robert Morgan was reportedly having a break, sitting outside the Palm Beach tower and reading a book. Morgan was also a certified flight instructor, although he had no hours in the Cessna Caravan. Knowing his instructor background his supervisor, Gregory Battani quickly found him and brought him in, to guide the passenger and “his” turboprop towards the airport. 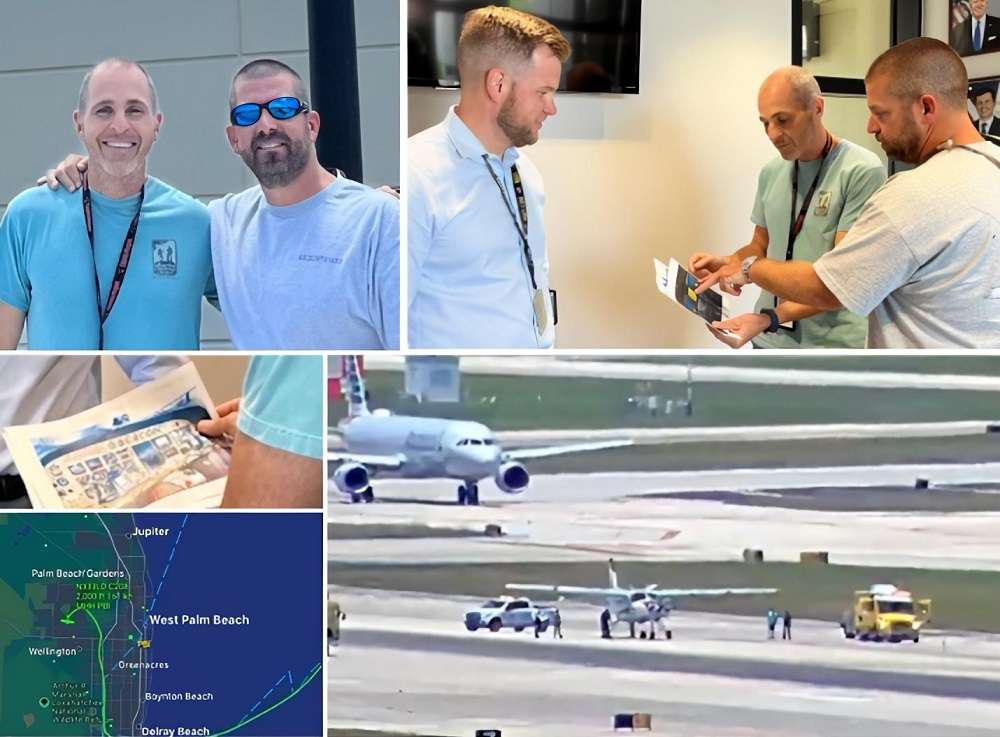 Another air traffic manager, Ryan Warren, printed a photo of a Cessna Caravan instrument panel. This was actually a different panel from what the passenger had in front of him. But the flight and engine controls are the same. Robert Morgan was able to direct the passenger towards the airport while descending for an approach.

When it came, the landing was almost anticlimactic. The aircraft made just one approach (!), landing uneventfully on runway 10L (10,000 feet or just over 3 km long) at Palm Beach. The controller/instructor had previously explained to him how to use the brakes, and stop the aircraft. This he did successfully. He then asked, “OK, how do I stop this thing (the engine)?”

The emergency briefly interrupted operations of commercial flights at Palm Beach. However, multiple pilots were quick to congratulate the passenger for his feat. But now the priority for emergency crews was to attend to the incapacitated pilot. So far, the authorities have not published the pilot’s name or the nature of his incapacitation.

This is brand new video (courtesy of Jeff Chandler) of a passenger landing a plane today at PBIA.

His pilot had passed out, and the passenger with zero flight experience was forced to land the plane.

Team coverage of this amazing landing is on @WPBF25News at 11. pic.twitter.com/jFLIlTp6Zs

After the event, the FAA confirmed that there were two passengers on the aircraft, working together to get it on the ground. Robert Morgan, the controller/instructor, was quick to give credit to Chip Flores and Justin Boyle at the Fort Pierce Tower, for handling the flight when the emergency began. The aircraft, a Cessna 208 Caravan, has registration N333LD. According to FAA records, it belongs to Beach Amphibian LLC.

Contrary to some sources, the operator of this aircraft is NOT Tailwind Air. The company did manage and operate the aircraft for its previous owner, until earlier this year.

From the point where the passenger took control of the aircraft in the middle of a dive, to the landing, the event lasted just under 40 minutes. This is not the first time a passenger with no flying experience landed an aircraft. But whatever the circumstances, such a feat is always impressive. Hopefully, the pilot can make a speedy recovery.