Flight Simulation: How To Fly Your Home Computer

Many of you will be familiar with home computer flight simulation. For some of you, as for me, it’ll be the main way you engage with the world of aviation. If for some reason you’re not in a position to fly for real, whether temporarily or at all, a flight simulator, or “sim”, can be a great way to keep connected to that world and indulge your love of flight.

You might know a little about flight sims, but maybe haven’t really picked one up yet. And perhaps you’re thinking of looking into it. But what to look for? Flight simulation can sometimes seem like one of those activities where the more you find out, the more there is to find out.

Being a keen flight simulator user, I thought it might be helpful to go over some of the basics of what it’s all about, what you need to get started, and where you can find out more.

Important note, though: no reference to any software or other products in this article should be taken as a recommendation by me or by Mentour Pilot. I can tell you a little bit about simulation in general, but I can’t tell you which program will necessarily work best for you, or detail in full what features they might have. 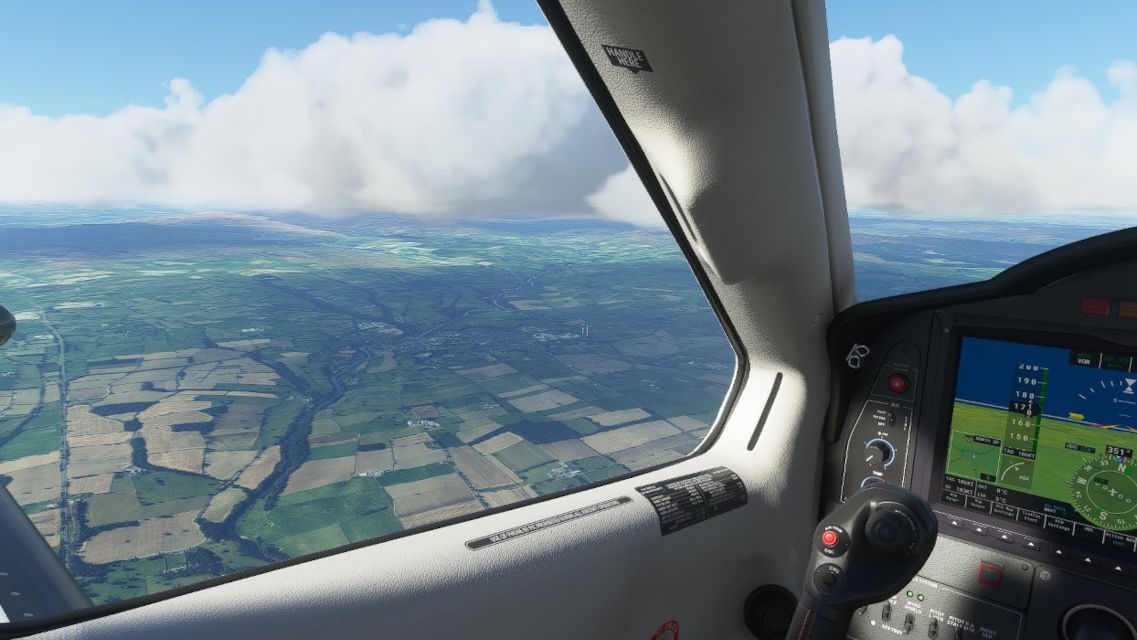 What is a Flight Simulator?

When I talk about a flight simulator here, I’m not talking about the big, room-sized machines that airline pilots use for their training. Those massive structures that use hydraulic jacks to make you feel all the proper movements of the real aircraft. Rather, I’m referring to computer programs that you can install on your PC at home which recreate some part of the experience of flying. Which might sound less impressive, but they’re also an awful lot cheaper, so that’s a plus point. 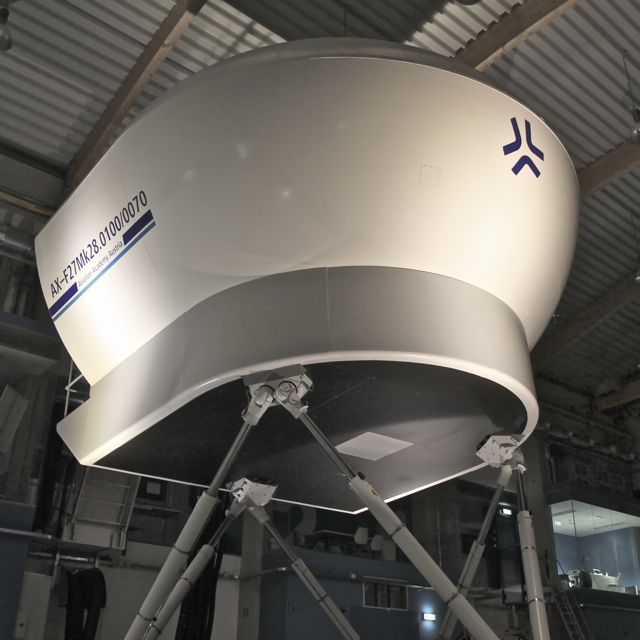 For the remainder of this article, I’ll be referring mainly to PC flight simulations as that’s where my experience is. There are flight sims available for computers running Linux, for Macs, and even for mobile devices. I’ll list some at the end to get you started but, again, these should not be taken as recommendations or endorsements.

Probably the earliest commercially available flight simulator for home computers was subLOGIC’s FS1 Flight Simulator, released way back in 1979 on the Apple II. As dated as it looks now, this was the program that started it all: it not only proved that a home computer could create this kind of play environment, but it also demonstrated that there were people out there who would buy. 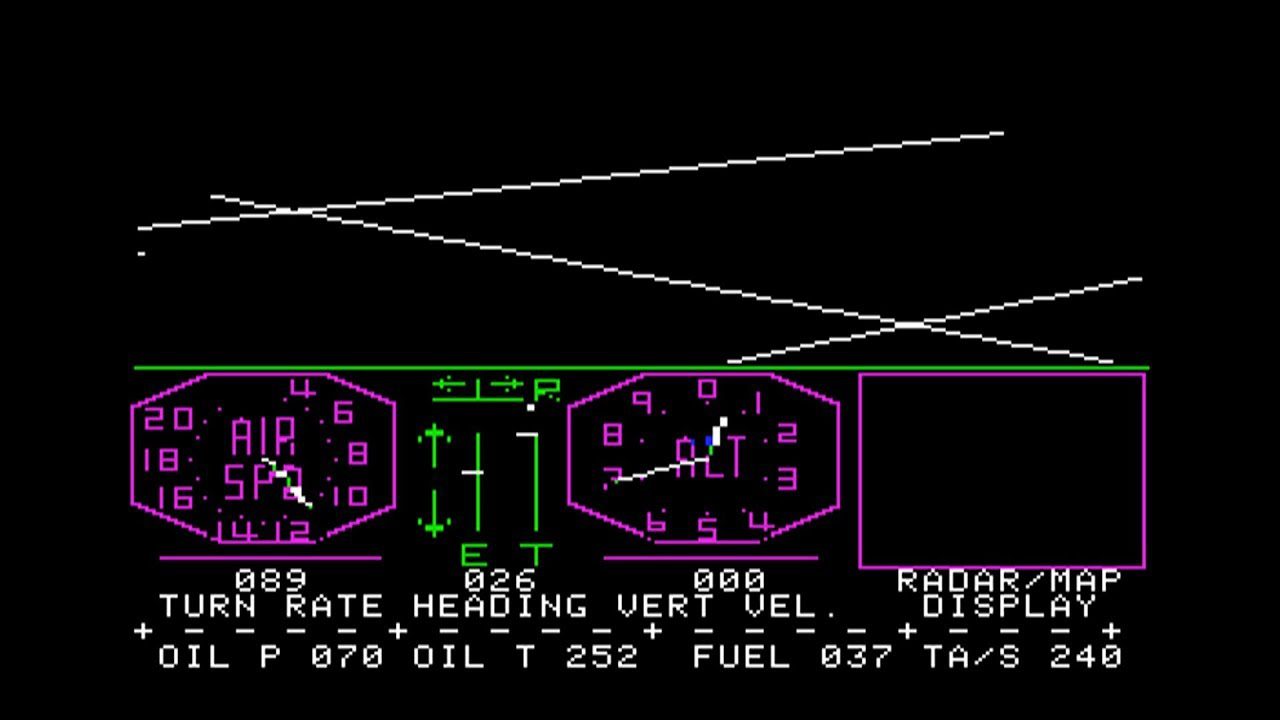 Since then, computer technology has advanced, and countless companies have produced ever-more-detailed, more-and-more realistic flight simulations.

A civil-aviation flight simulator focuses on modelling commercial or general aviation as accurately as is possible on a home computer. Most simulate the mechanics of flight, the control, configuration and management of the aircraft, and navigation. Some will include some kind of air traffic control direction. Often, ground movement is also simulated, with aircraft and ground-vehicles moving around taxiways and aprons modelled on airports’ real-world layouts.

What Flight Simulators Are Available?

An article like this couldn’t give a complete list of every flight simulator available for every platform. But there are two commercial sims that would probably be recognised as the most prominent titles. Together, these have become the established standards for this type of software.

There is also X-Plane, currently on version 11, from Laminar Research. Laminar is particularly interested in the physics of flight – how air flows over lifting surfaces, the effects of mass and engine layout and power – and each flight simulator in their series has tended to focus on this detailed mechanical realism.

There are countless other programs available, but Microsoft Flight Simulator (MFS) and X-Plane 11 (XP11) are probably the two most prominent just now. 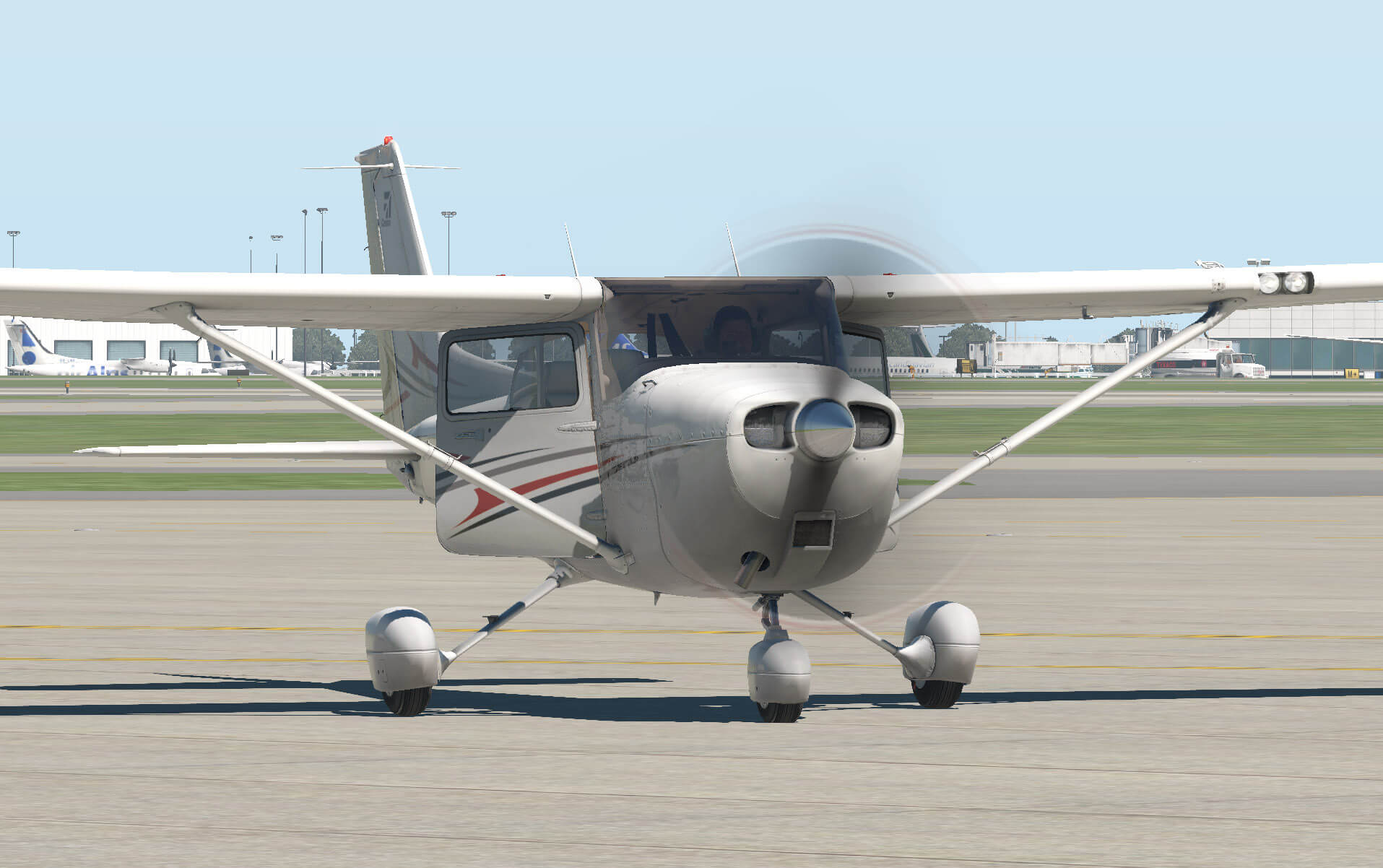 XP11 and MFS are currently selling in the UK for around £60 and £55 respectively. At time of writing that’s about €65 and €70. MFS also offers “Deluxe” and “Premium Deluxe” versions. These include additional aircraft and some more detailed airport models. The Premium Deluxe edition is currently retailing at £100 (roughly €128) on Steam.

Still, if you’re on a budget, you still have options. Microsoft and Laminar both still sell some earlier versions of their own titles. X-Plane versions back to 8 can still be downloaded from Laminar, and Microsoft’s Flight Simulator X is available for purchase on Steam.

In addition, plenty of other sims are available at lower price ranges. These will often focus on particular areas of the world, or a specific aircraft, and you may find some a little less realistic.

Or, if you’re really only looking to dip your toe in the water clouds (?) before you decide whether to budget for a purchase, you might like to look up FlightGear. This is a flight simulator made by enthusiasts as “open source” software, meaning it’s free to download and use. You should be aware that, as it’s produced by volunteers and hobbyists, it has no formal customer support structure. There are forums on the website where you can ask questions if you run into difficulties.

Which is the Best Simulator?

Every flight simulator will have its fans, and debates over which is the best sim are frequent and often… passionate. It’s not really possible to say which one is objectively best. That will depend very much on what aspect of simulation interests you the most.

As I mentioned, Laminar are primarily interested in accurate flight modelling, with a particular focus on airflow and fluid dynamics. If this aspect is of most interest to you, XP11 might be the better choice. Laminar also offer a demo version of XP11, so you can try it out and see how well it works for you before you buy.

On the other hand, if you’re more taken with the overall ‘feel’ of flight, including the visual experience, you might prefer MFS. While to my knowledge there’s no demo version of MFS (as of March 2021), there are numerous YouTube videos showing it in operation and offering reviews. MFS also includes a series of lessons designed to get new fliers aloft.

A large range of add-ons are available for both these simulators, including extra aircraft, or more detailed scenery. Third-party companies and individual enthusiasts develop and release these quite regularly, so there’s plenty of scope to expand and enhance the basic experience. But, again, do bear in mind these are only two of the most prominent products in a very large market.

Home flight simulation is a very customisable hobby. Whether you have a budget for extra equipment, or whether you need to make do with what you’ve got, you can usually find a flight sim setup that will suit you. Generally, the more up-to-date your computer is – the faster it runs, the more memory it has, and so on – the better your chosen simulator will look and perform. And as with any PC games software, make sure to check the minimum required system specifications before you buy! As long as your system meets the minimums, everything else is pretty much optional.

You can fly your plane with keyboard and mouse. You could use a simple setup including a basic gaming joystick. Or, if you’re really feeling it, you can equip yourself with a purpose-built flight simulation joystick with a separate throttle control and lots of buttons and switches. Some simulators support virtual reality (VR) headsets, and a couple are designed specifically for VR use. (None of the ones I’ve named here require VR equipment.) There’s also the option to buy equipment designed to mimic what you’d find in the real world. Authentic control yokes, physical instrument panel displays, rudder and brake pedals – it’s all out there. Some simulator enthusiasts have gone so far as to construct whole cockpit environments from salvaged aircraft parts.

But none of this is necessary. Aside those minimum computer specifications, and the cost of whatever simulator program you choose, you can enjoy flight simulation with very little if any extra outlay. 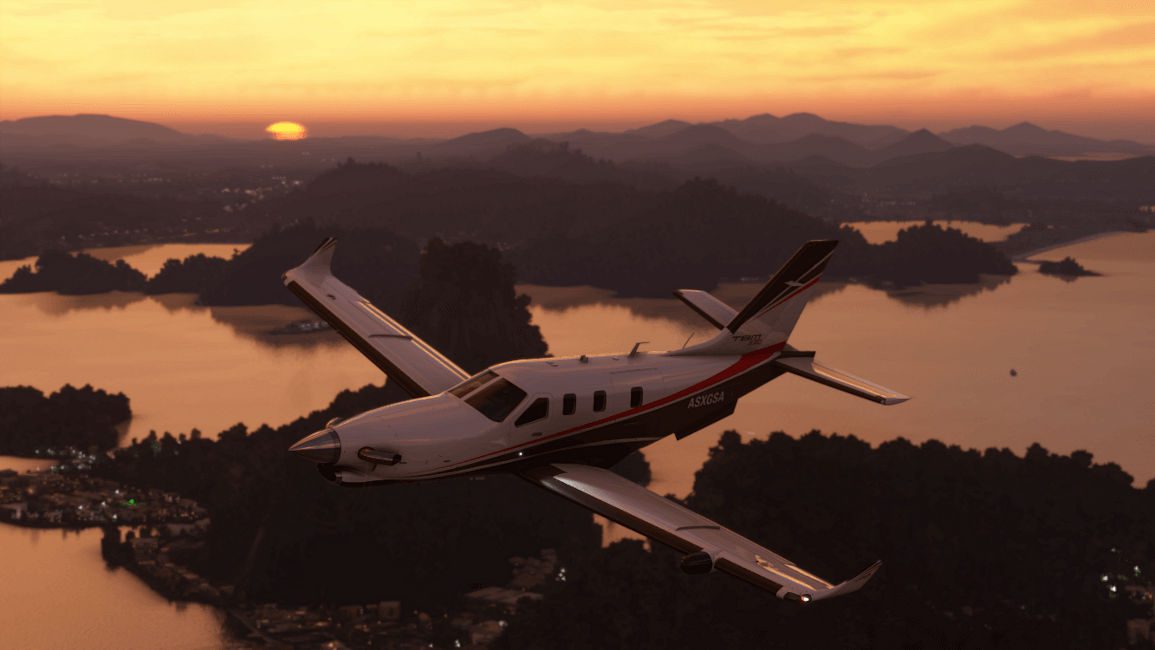 Can a Flight Sim Help Me With Actual Flight Training?

I’ve mentioned simulations that are designed to model the aviation experience accurately – but you should remember that flying on a computer has limits.

An enthusiasm for flight simulation can motivate you to learn a lot about how certain systems and mechanisms work. But remember that in a simulation it’s always possible to restart if you get things wrong. In real life, of course, safety is of paramount importance.

No matter how much experience you have at a computer screen, it’s no substitute for proper training. A familiarity with flight simulations may help you in picking up certain lessons. And it’s not unknown for flight schools to use PC flight simulations to demonstrate procedures and principles. But in this case you must always make sure to do it under the proper direction and only for the reason given.

In addition, while it’s possible to use a lot of real-world equipment and resources in flight simulation if you want to, you should never use materials intended for simulation use in a real-life situation. This would include things like maps, checklists and flight computers like the E6B. This is usually because material for simulation use might not be as accurate, or may not be up-to-date with new procedures, settings or regulations.

Hopefully, the above dire warnings haven’t discouraged you too much. Hopefully, you’re still interested in getting started in flight simulation. If so, look below to find some of more prominent titles that are available at the moment. Flight simmers are mostly a friendly and helpful bunch, so don’t be afraid to ask questions. And don’t forget there’s also a Flight Simulation forum section in the Mentour mobile app.

I hope to see you in the virtual skies!

A Selection of Flight Simulator Software:

FlightGear – FlightGear Project – https://www.flightgear.org/ (Windows, Mac, Linux – program is free to download, or can be purchased on DVD)