EMAS – Or, How To Safely Stop Planes With No Brakes!

EMAS is a simple but effective way to make aviation safer. But perhaps what is most surprising about this safety system, is how new it is.

We have looked at several incidents involving runway overruns. On many occasions, such events are relatively harmless, with aircraft going beyond the paved surface by only metres. Such low-speed overruns typically end with a towed jet, some red faces and a fair bit of paperwork. But higher-speed overruns can have devastating effects. 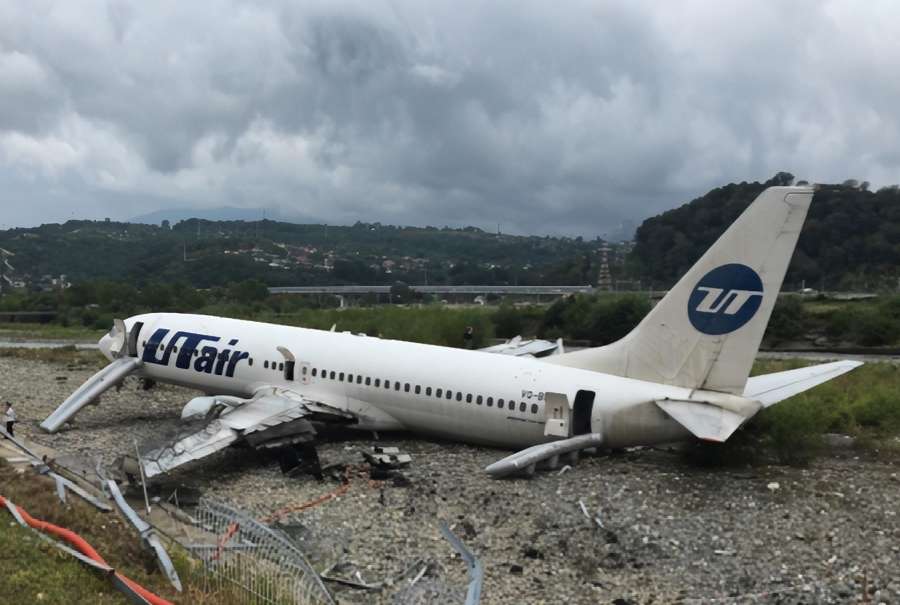 Fortunately, authorities worldwide have understood the significance of this matter. So over time, standards for runway safety areas (RSA) or runway end safety areas (RESA) have been becoming more strict. But what if there isn’t physically enough room for a longer safety area? Well, that’s where EMAS comes in.

The initials stand for Engineered Material Arresting System. The FAA and the Port Authority of New York and New Jersey began work on it in the 1990s. Without EMAS, airports typically aim to have a safety area that is at least 1,000 feet long, per the FAA. ICAO requires 90m (300ft) RESA minimum, plus 240m (790ft) if possible. 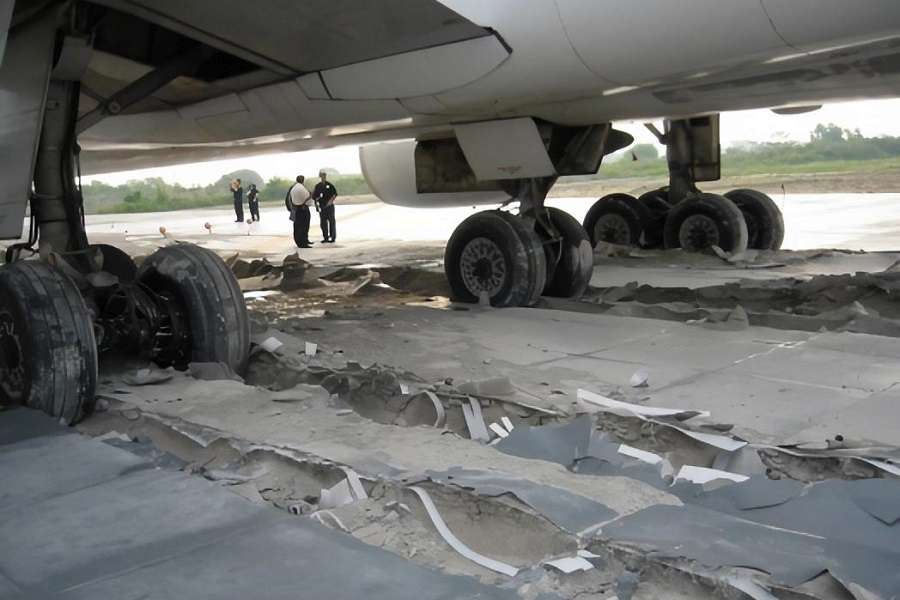 EMAS – Friction Making Up For Lack Of Space

The idea is that if adequate space for a nice, long RESA isn’t possible, we can use something that makes planes slow down quicker on their own. In essence, this is about rolling resistance. There are two broad categories of EMAS materials, that work the same way. One is a form of lightweight (i.e. less dense) concrete. This is strong enough to support rescue vehicles, but the weight of an aircraft will crush it.

The other material is a silica foam system, made using recycled composites and glass. Then a type of cement covers it, to protect it from the elements, along with a top coat of sealant. In both cases, the weight of an aeroplane will crush through the materials. But the necessary energy to deform the EMAS blocks creates rolling resistance. And in doing so, it slows down and stops the aircraft. 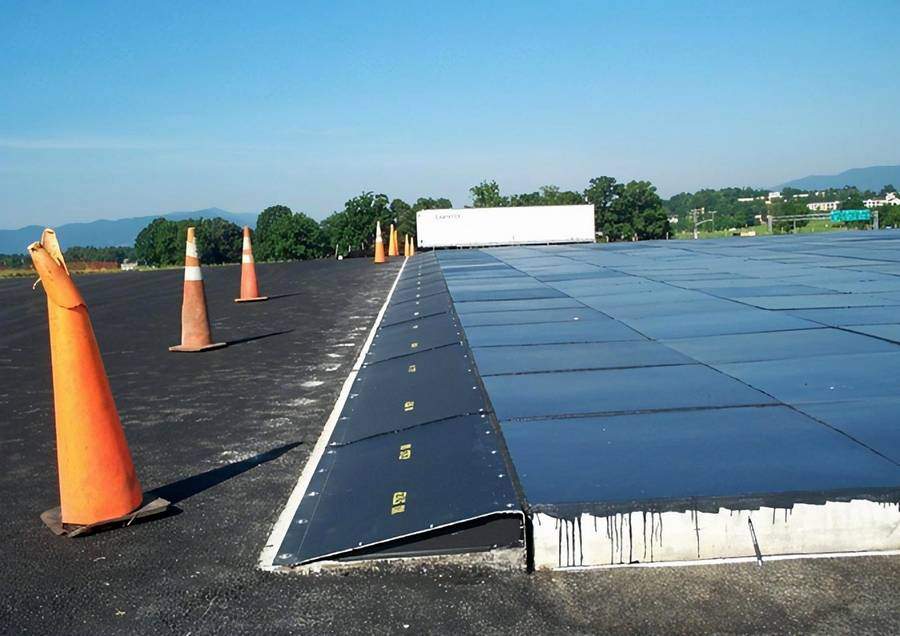 The system during construction. Photo: FAA

The first airport to use the new technology was JFK, in New York City, on the 25th of November, 1996. But the idea took some time to catch on. The next airport was Minneapolis Saint Paul International (KMSP), in 1999. More airports gradually followed until the system began to produce results. The first EMAS arrestment happened at JFK in 1999, involving a SAAB 340.

That first incident put some reservations to bed, proving that the system was effective even on smaller aircraft. But the second event was something much bigger: an MD-11 freighter in 2003, also at JFK. The popularity of EMAS grew much quicker after that. As of July this year, there are 67 airports in the US that use the system, employing it at 115 runway ends. 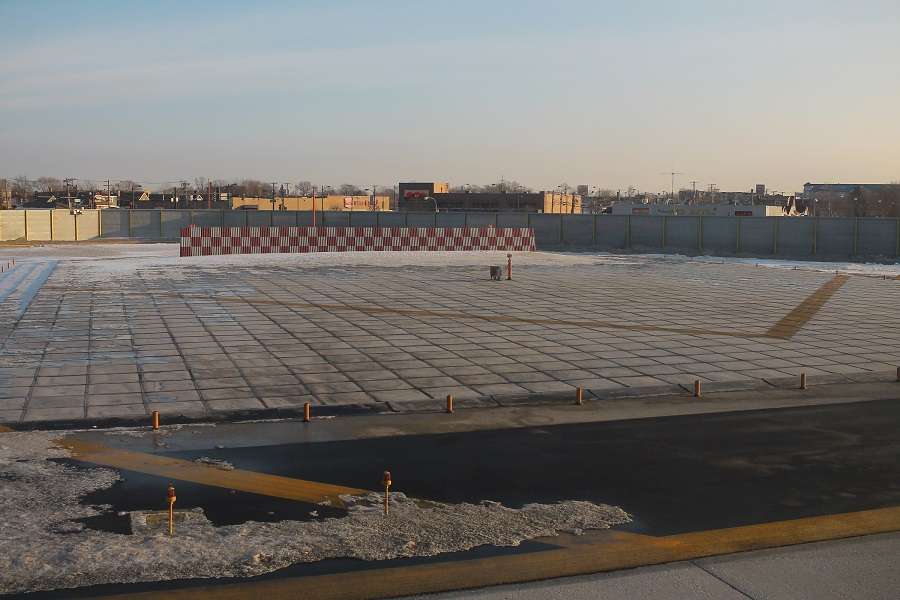 EMAS at the end of a runway in Chicago Midway (KMDW). Photo: formulanone, CC BY-SA 2.0

The system is taking a bit longer to gain popularity outside the United States, as other aviation authorities evaluate it. But there are now at least 15 installations elsewhere in the world, including China, Norway, Saudi Arabia, Spain and Taiwan. And to be fair, there are alternatives to EMAS, that also use the high rolling resistance principle.

The idea of having installations/materials that deform to slow down vehicles isn’t new. In essence, EMAS uses the same principle as gravel traps in race tracks or arrestor beds for big trucks. In Europe, several airports have installed arrestor beds at the ends of runways, for the same reasons. But each solution has its advantages and disadvantages. 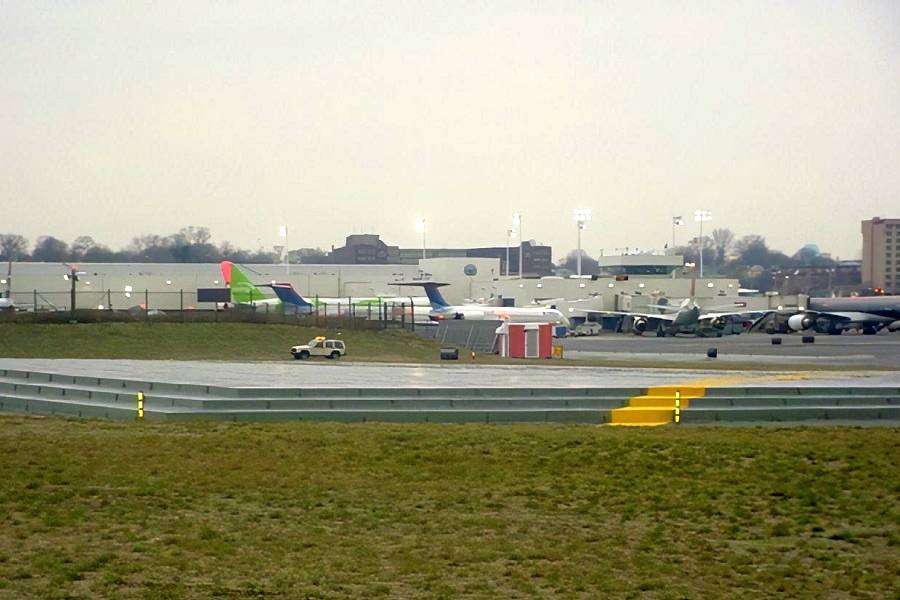 This installation is thick enough to require side steps, for easier access. Photo: FAA

One argument against the system is its installation cost. Arrestor beds using gravel are a lot cheaper to set up, and repair following a runway overrun. However, arrestor beds may require more maintenance, and their performance could be subject to weather/climate conditions. Also, rescue vehicles may struggle to approach an aircraft in an arrestor bed, as opposed to one in an EMAS.

So the choice of solution will depend on the circumstances, including budget. But ultimately, both approaches appear to achieve safe results. That said, airlines and aviation authorities tend to prefer the third option: a nice, long runway end safety area.