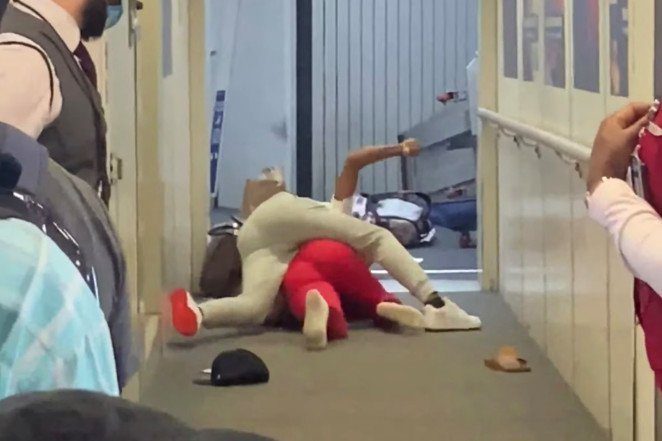 A brawl between two passengers unfolded on the jet bridge of Delta flight on-stand at La Guardia Airport this Sunday, 6 August 2020. A video, from a fellow passenger on the flight, shows the full extent of the incident and disruption caused.

The two women were about to board a Delta Airlines flight to Atlanta when they came to fight before onlookers, including a few who seemed to be relatives of both of them, a twenty second video posted online shows.

“Come get Aaliyah, she’s fighting,” a woman off-camera can be heard telling someone as the two women repeatedly strike each other before wrestling and thrashing one another down to the ground.

As the passengers tunble on the ground continuing to tussel and swing at one other, a concerned woman who appears to be on her mobile phone walks into the frame and shouts, “Aaliyah! Stop! Stop!” as she moves closer and closer to the fracas.

Moments later, a man can be seen running past the airport staffers and passengers in an attempt to break up the fight before the video comes to an end. One Delta employee appears to call for help as another watches the bizarre incident in apparent disbelief of what’s going on.

Nicole Dusanek, a spokesperson for Delta Airlines, told reporters that the flight to Atlanta “was delayed due to a customer issue” without providing any other specific details on the matter.

It was not immediately clear what sparked the fight or whether or not the fighting women were related, thought Law Enforcement Officials confirmed neither of the passengers were arrested due to the incident.

Do you think passenger disruptions should be penalised more harshly? Let us know your thoughts in the comments below!