We know Boeing as an aircraft manufacturer, but many people don’t know that the company also designed and built the Apollo lunar rover!

The Apollo mission to the Moon was one of the most iconic events of the 20th century. There are so many events, trials and details in it, involving many companies in aviation. Sadly, public interest in these missions waned quickly, after the success of Apollo 11. But the program still held many developments and surprises, including that electric “Moon Buggy”. And it obviously made sense to task an aviation company with making it. 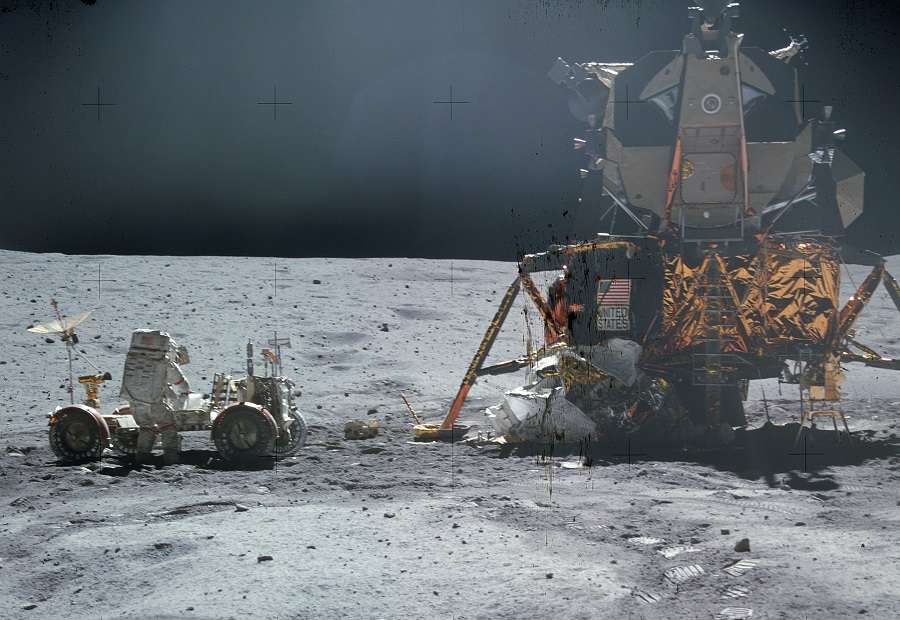 The Apollo 16 LRV, next to the Lunar Lander and John Young. Photo: NASA

But the Apollo lunar rover isn’t Boeing’s only contribution in the Apollo missions – far from it. The Saturn V rocket’s first stage was also Boeing’s. North American Aviation (NAA) built the second stage. And NAA is now part of Boeing, too! Similarly, the third stage was built by Douglas, later McDonnell Douglas, now Boeing. NAA also built the Command and Service Module (CSM), which made up the Apollo spacecraft, along with the Lunar Module.

Alternatives To The Apollo Lunar Rover?

So it’s almost… misleading to single out Boeing as the manufacturer of the Apollo lunar rover. But this became quite an iconic vehicle. It was also vital, in allowing astronauts to cover many times more ground than would otherwise be possible. And if the manufacturer of the Lunar Roving Vehicle (LRV) is a surprise to many, its mileage is downright impressive. But of course, the fact that the gravity of the Moon is just 1/6th that of Earth’s really helps. 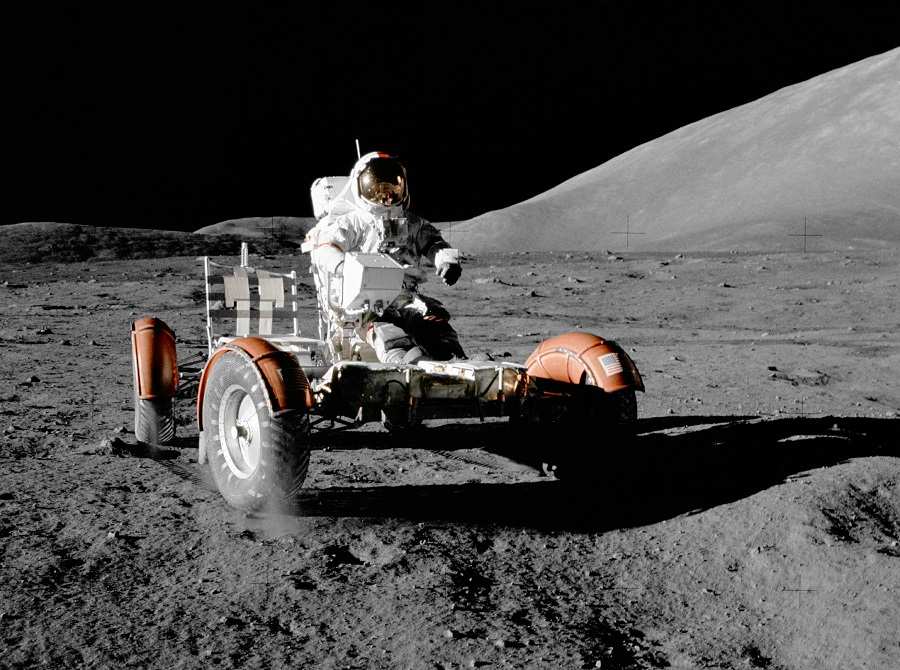 Early on in the program, the details of the Apollo lunar rover were quite fluid. Other, simpler and smaller options (including motorbikes!) were on the table. With every gram (or ounce) being costly to carry to the Moon, the first ideas involved much simpler solutions. On the one hand, the vehicle would need to fit in one of the Lunar Module’s bays. But conversely, the vehicle would need to be able to carry two astronauts, their tools and some lunar rocks!

In its final form, the Apollo lunar rover had a mass of 210 kg (463 lbs). It had a maximum payload of 490 kg (1080 lbs). Note that these numbers describe the mass, not the weight. We’d need to divide them by six, to figure out what the vehicle’s batteries and motors carried on the Moon. The primary material the LRV consisted of was aluminium. Instead of a steering wheel, it had a centrally-mounted T-shaped “joystick”, that both crew members could operate, if necessary. 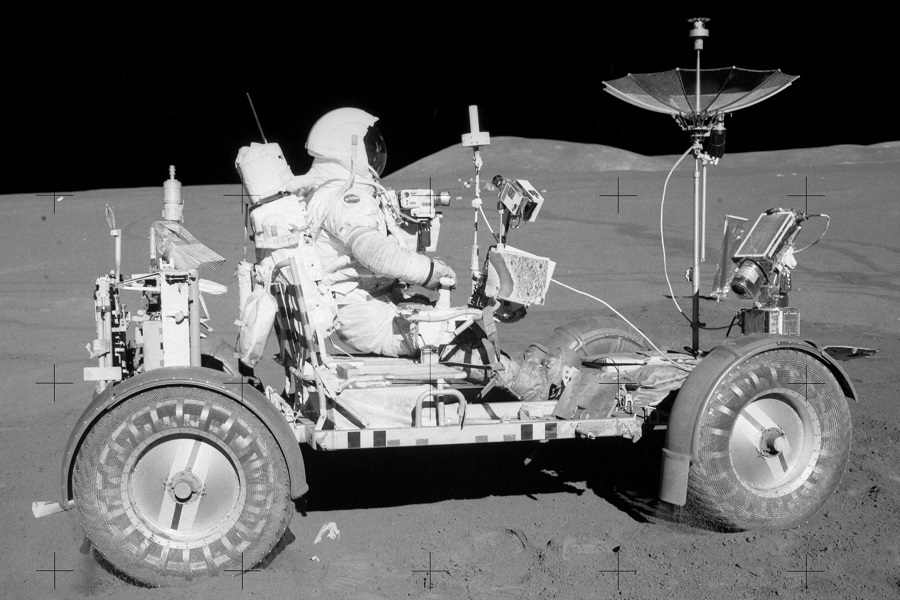 The entire chassis of the lunar rover could fold in half, allowing it to fit in the Apollo Lunar Lander’s descent stage. Each wheel folded as well. There was an electric motor for each wheel, and two smaller motors took care of the steering. Both the front and rear axles could steer. But astronauts could choose to steer with only one of them. The LRV had two non-rechargeable batteries, with a capacity of 121Ah.

The initial lunar rover contract that Boeing got for the Apollo program was worth $19 million. By the time the program ended, this cost had more or less doubled. Boeing built four Moon-capable LRVs, of which three actually went to the Moon. This happened on Apollo 15, 16 and 17. But Boeing also had to build a number of other vehicles and mockups, for testing and various trials. 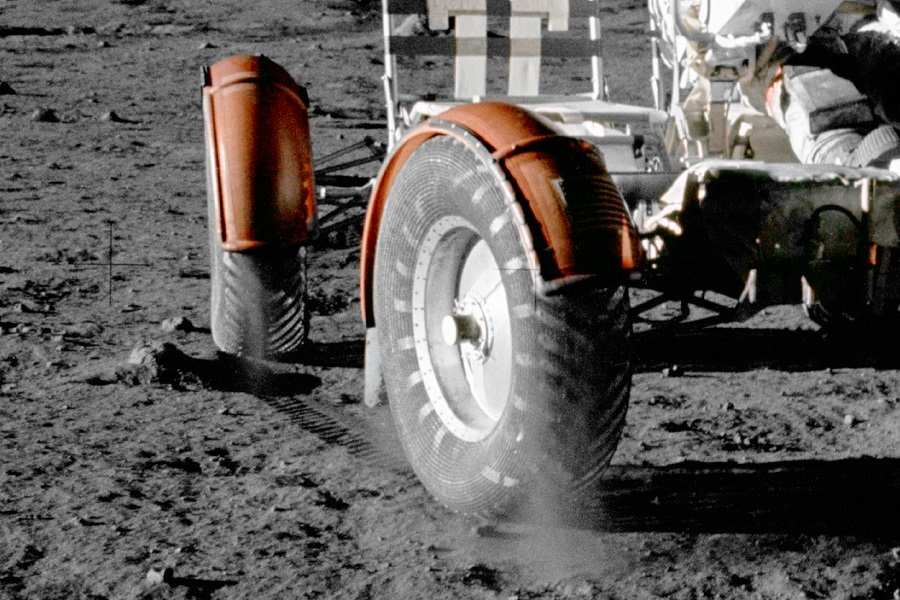 The tyres of the lunar rover were an interesting Apollo engineering and… logistical feature. These aren’t inflatable tyres. But the fact that they look like typical tyres (for the 1960s) isn’t a coincidence, either. NASA wanted to test the vehicle thoroughly, before sending it to the moon. And engineering it to work on the moon, was difficult enough. But NASA and Boeing knew that they also needed to make a version of the vehicle that worked on Earth, for testing purposes.

Wheels For Earth And The Moon?

NASA and Boeing agreed that normal inflatable rubber tyres wouldn’t work on the Moon. But they didn’t want to reinvent the wheel (literally) twice, once for Moon usage, then again for use on Earth! A good “Moon” tyre wouldn’t really work on Earth, with six times the gravity. So the Apollo lunar rover has a wheel-tyre set that can be substituted for more typical “Earth” wheels and tyres. Well – sort of. There were many more differences between Earth and Moon LRV versions. 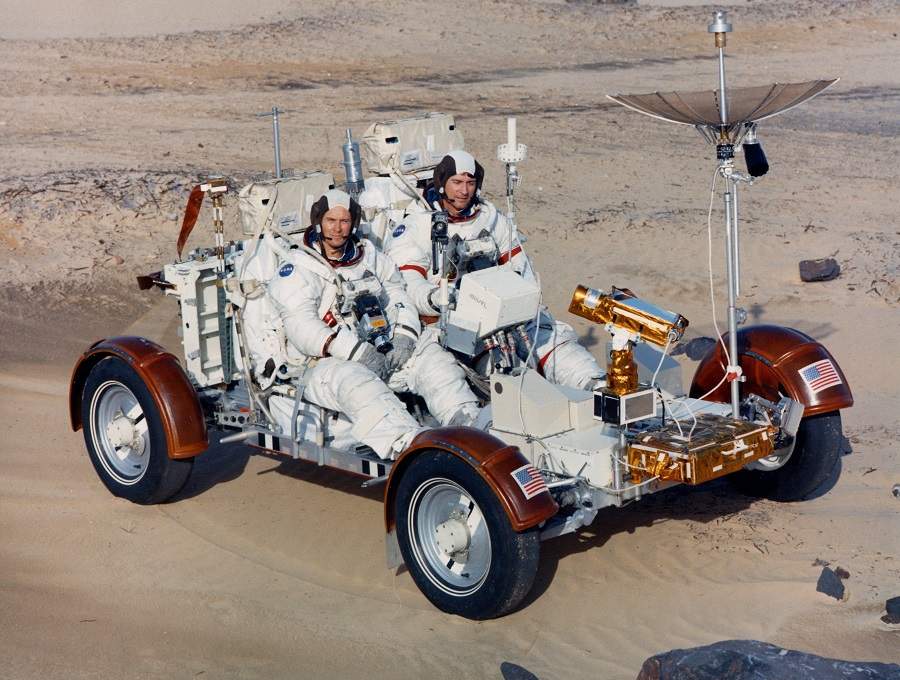 The ‘1-G Trainer’ on Earth. Those are normal pneumatic tyres. Photo: NASA

Those Moon tyres used aluminium, zinc-coated steel and titanium, to give them strength and traction. The attachment to the inner rim incorporated a bump stop, to protect the hub. Also, the vehicle incorporated racecar-like double wishbone suspension, with torsion springs and dampers. The Apollo lunar rover had a 36 cm (14.1”) ground clearance, at its gross weight.

The LRV’s central joystick (officially the “hand controller”) handled throttle and braking, as well as steering. Pushing it forward accelerated the LRV forward, and pulling it backwards activated the brakes. Astronauts would flip a switch, to put the vehicle in reverse when pulling backwards on the stick. The lunar rover proved to be a reliable vehicle, that the Apollo astronauts were fond of. 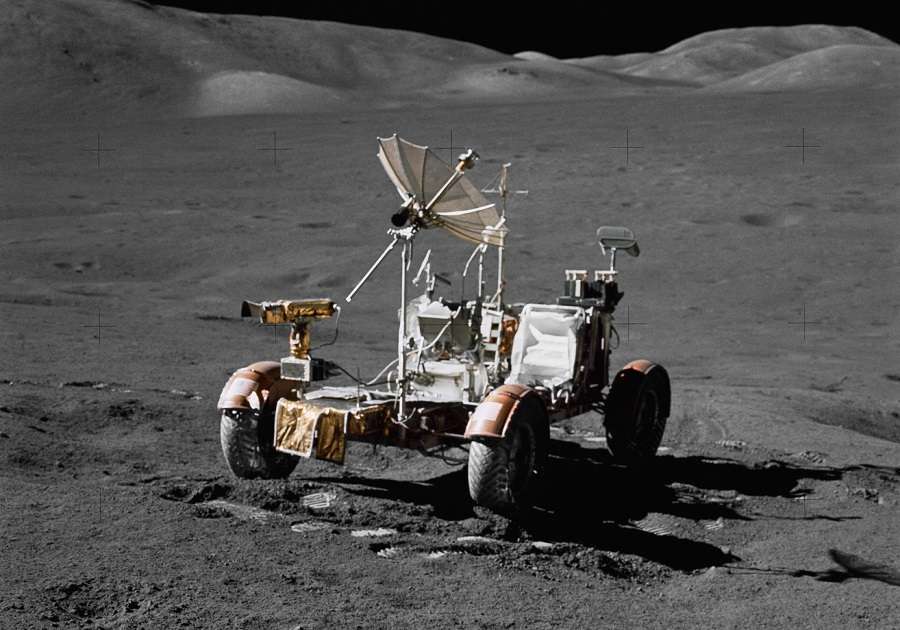 Covering A Lot Of Real Estate 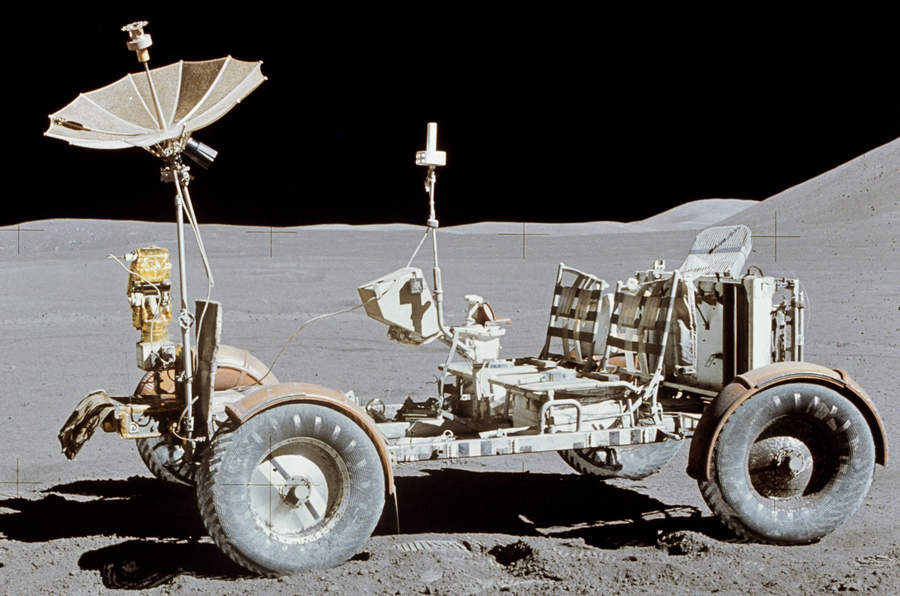 Boeing developed the Apollo lunar rover in just 17 months. This time had to include everything, including the training for the first astronauts. NASA used the fourth vehicle for spares, after the cancellations of further Apollo missions. Interestingly, the Earth version that astronauts used for training, was called the ‘1-G gravity trainer’.

The lunar rover made a lot of Moon discoveries possible, according to Apollo 17 astronaut Harrison Schmitt. A camera mounted on the Apollo 17 LRV recorded the take-off of the lunar lander (under control from Houston), on its way back to Moon orbit. Their job done, the three vehicles remain on the moon to this day. But despite their key role, they probably aren’t very high on many people’s list of great Boeing vehicles. And that’s probably a bit unfair!