Will Ampaire’s Electric EEL become the first hybrid aircraft to carry paying passengers? We don’t know, but it might happen sooner than you think.

We see a lot of electric and low-carbon emission aircraft projects lately. Some are more ambitious than others. They vary greatly in size and range. But most of them are still some way off becoming operational. Really, most of them are just testbeds, at this point. And the Ampaire Electric EEL is one of them, too. However, it still has its passenger seats. 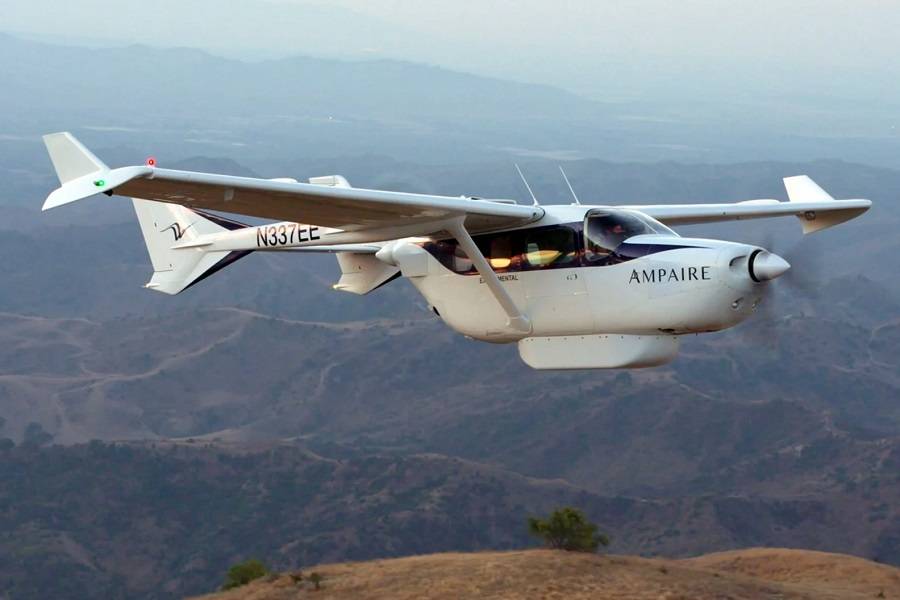 Before Ampaire’s Electric EEL, we saw another hybrid project that uses the Cessna 337 Skymaster, for testing purposes. This was the Voltaero Cassio. Its designers initially used the front engine in stock configuration, fitting a hybrid piston/electric power unit in the rear. They added two extra motors on the wings, feeding them with energy from the hybrid power unit. They they omitted the front engine entirely, replacing its weight with batteries.

Ampaire took a different approach with its Electric EEL. They use an internal combustion engine in the rear, and an electric motor in the front. The batteries go in a belly pod. The aircraft retains three seats, plus the pilot. Ampaire claims fuel savings between 50 and 70%, depending on distance. Omitting one engine means reduced maintenance requirements as well. But the aircraft retains the redundancy of two separate power sources. 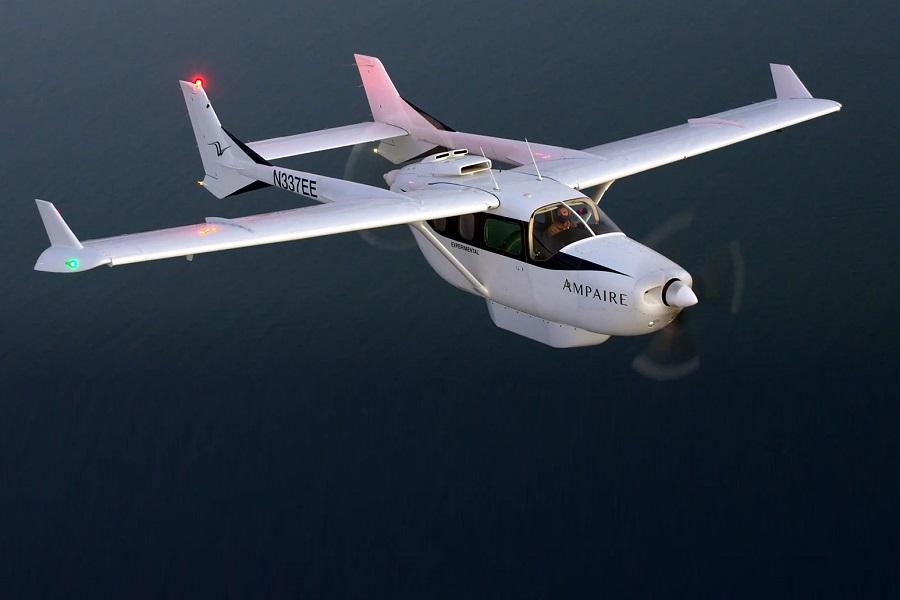 All this is nice, but as with many promising projects, it may seem a bit theoretical – even if the plane is flying. So, Ampaire decided to put its Electric EEL through its paces. They teamed up with Southern Airways and their subsidiary, Mokulele Airlines. Mokulele operate out of Hawaii, using Cessna Caravans, to ferry small numbers of tourists around the islands.

But wait – the Electric EEL is Ampaire’s testbed! And obviously at this stage, it is very much an experimental aircraft. What role could it have, working with an airline? Well, it can’t ferry passengers. But under new FAA rules, it can certainly show the airline and other interested parties, how it could do this.

Ampaire’s Electric EEL became the first hybrid-electric aircraft working under the FAA’s Experimental-Market Survey category. Ampaire can fly it with their crew and other personnel, for training and ‘exploratory market activity’. In essence, the company is performing flights according to Mokulele’s scenarios. They need to show what they can do, not only in terms of range, but also turnarounds, costs and regular maintenance. 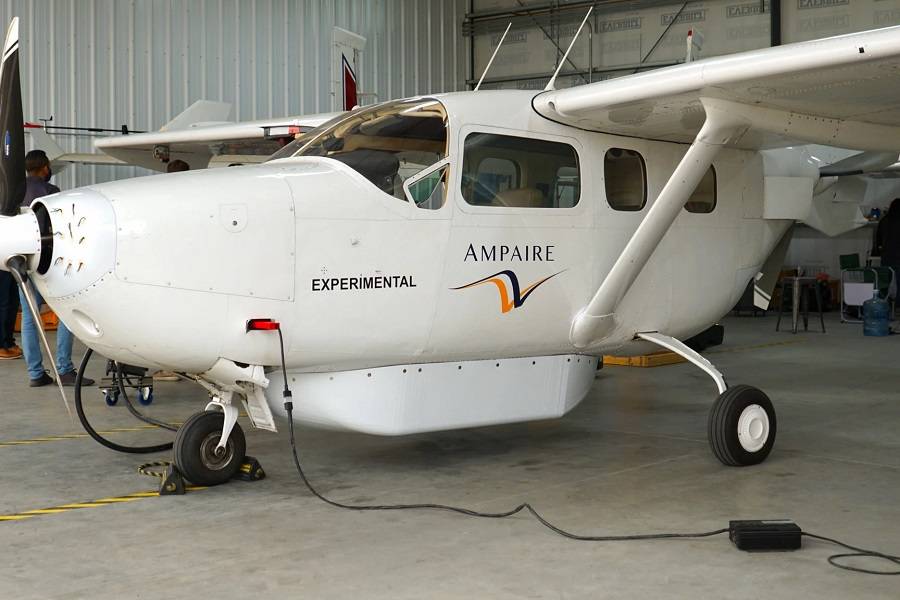 As part of their Mokulele project, last December Ampaire flew the Electric EEL from Kahului Airport in Maui, across the island to Hana airport. And then they returned, without recharging. It’s a flying distance of only around 55km each way. But it only the first such test. And Ampaire is repeating the flights with its Electric EEL daily, over the duration of a month! Speaking about the project, Ampaire CEO Kevin Noertker said:

“We’re following the successful path of hybrid-electric automobiles in transforming ground transportation by taking that model to the sky. By upgrading current aircraft with hybrid-electric propulsion we can enter the market quickly and take advantage of existing infrastructure for fixed-wing aviation.” 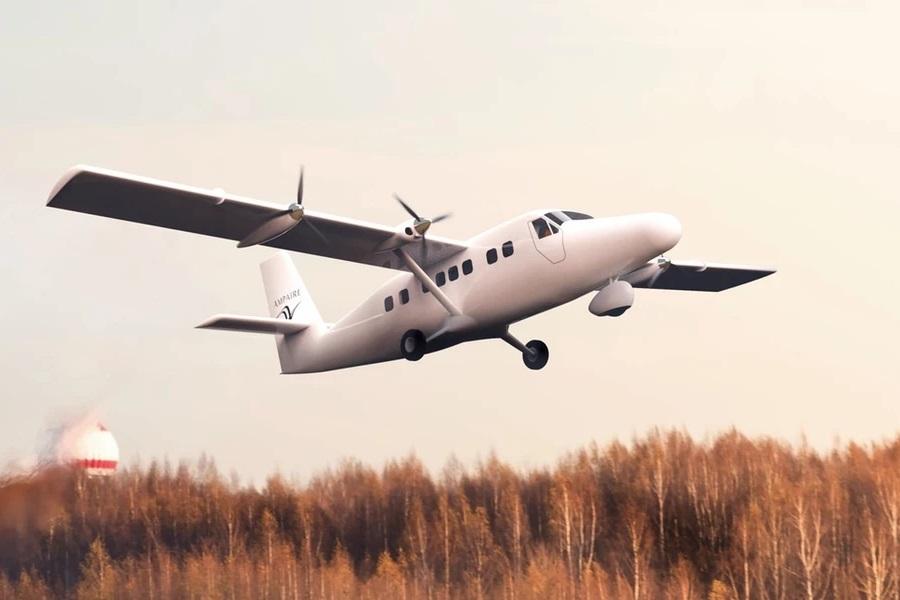 But the Electric EEL remains primarily a testbed for Ampaire. However, their next test vehicle is another existing aircraft. This time it’s going to be a Twin Otter. Designs show two conventional engines, alongside two separate electric motors and propellers.

The Voltaero Cassio may seem like a more advanced project than Ampaire’s Electric EEL. But Voltaero’s operational aircraft is still some way into the future. The question is, who gets there first. And while more development should lead to better aircraft, someone needs to do the legwork, and experiment. We saw this with the all electric Harbour Air and MagniX projects, as well.

Let’s see who wins! Ampaire is a partner in the Sustainable Aviation Test Environment (SATE) in Scotland as we saw recently. So we could see them in another series of airline scenario tests, soon.