A Transnorthern Super DC-3 crew diverted and made a gear-up landing, after an engine failure shortly after take-off. There were no injuries.

The incident happened on Wednesday the 8th of December, involving a Transnorthern cargo flight, number TNV-123. It would fly from Anchorage-Ted Stevens International (PANC) to Kodiak Airport (PADQ) in Alaska, USA. It was the first flight this aircraft made in several days (at least a week). 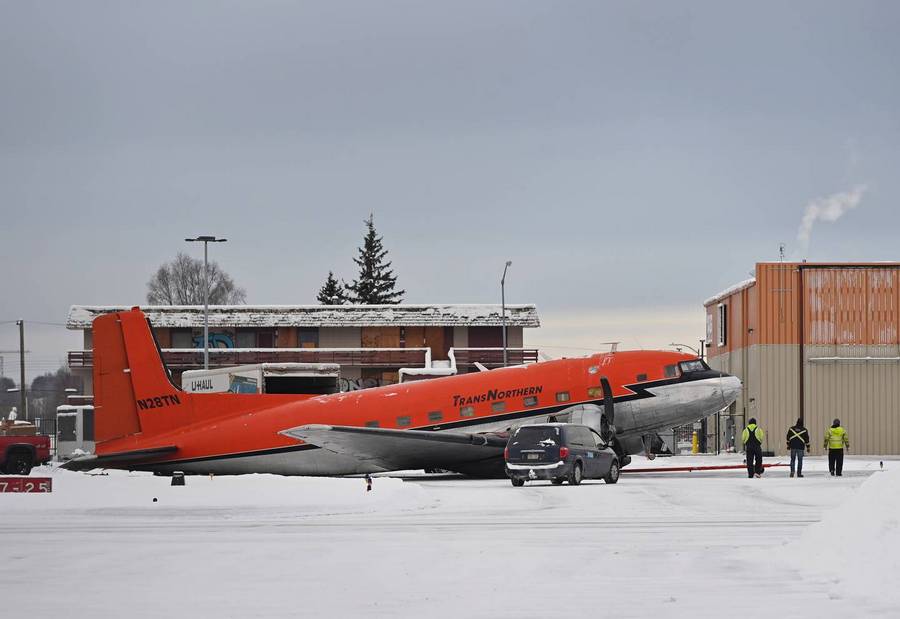 The Super DC-3 was climbing out of runway 07L in Anchorage International when the aircraft’s right engine failed. The Transnorthern crew declared an emergency. At first, they announced their intention to return to runway 07L for landing. The crew continued a shallow climb, reaching an altitude of approximately 900 feet.

The flight crew also requested left turns only, to avoid having to turn their Super DC-3 towards the ‘dead’ engine. But after turning left after their initial climb, they found themselves close to Anchorage-Merrill Field (PAMR). This is a smaller airport, used mainly for general aviation. Its longest runway is 7/25, with a paved surface 4,000 feet (1,219 metres) long. 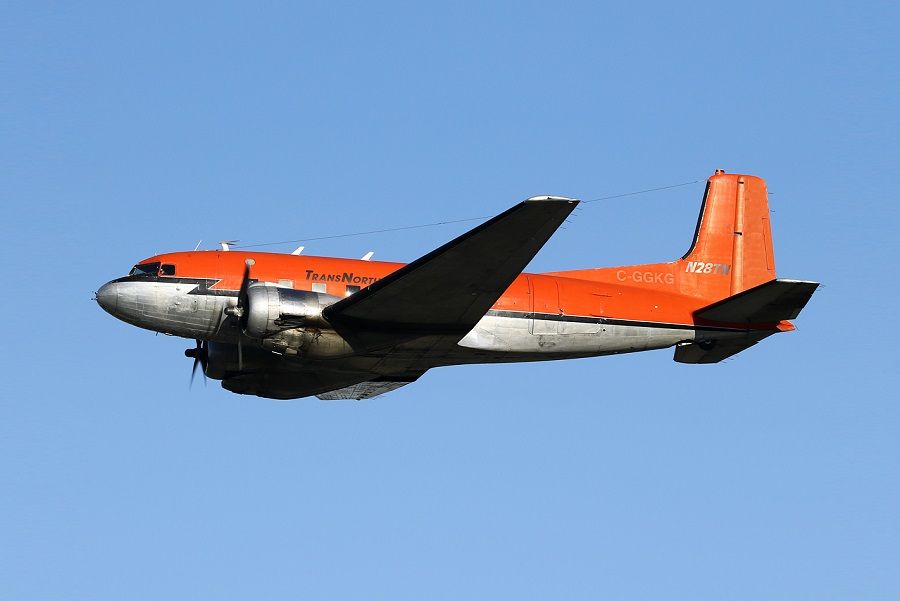 Super DC-3 Landing On One Engine

The crew made a descending right turn, to get to runway 07 in Merrill Field.  They also decided that this would have to be a gear-up landing. The aircraft reportedly clipped the tops of trees, shortly before the runway. There is a video showing the Super DC-3 as it touches down, the crew trying to keep the working left engine off the ground as long as possible. We can also see that the faulty engine doesn’t appear to be feathered.

The aircraft sustained substantial damage in this occurrence. But despite its engine woes, the crew managed to stop the Super DC-3 on the runway, with no injuries. They were the only ones on board. The runway remained closed for over six hours after the accident. A crane eventually removed the aircraft, however, the extent of its damage is unclear at this time. 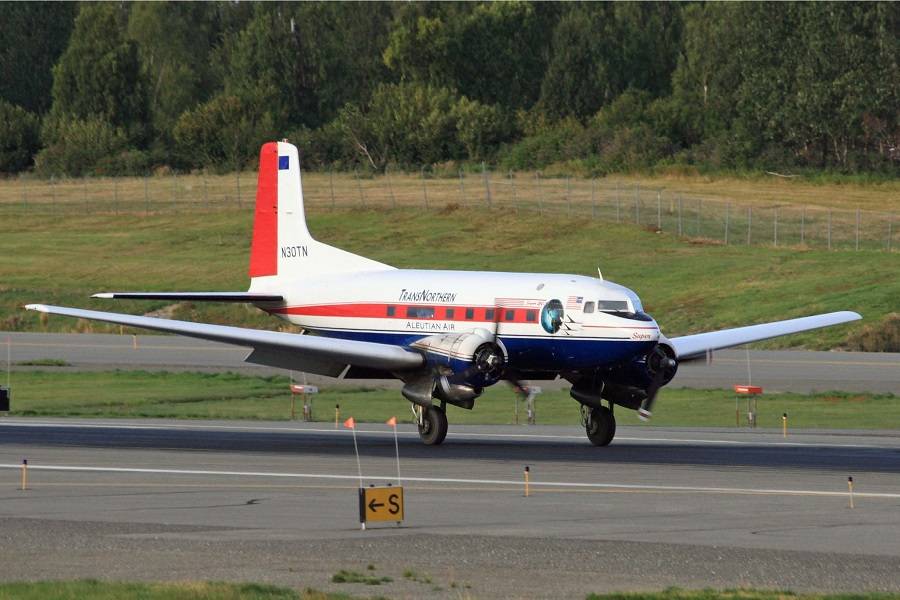 Unfortunately, this engine failure event is Transnorthern’s second accident involving a Super DC-3 this year. The previous event was a gear collapse on landing last August, at Alaska’s Goodnews airfield (IATA: GNU, no ICAO). There were no injuries from this accident. But that aircraft (N30TN) doesn’t appear to have flown again since.

A Long History, But Without Many Past Owners

The aircraft in this accident is a Super DC-3 (aka DC-3S or more correctly, a C-117D) with tail number N28TN. The aircraft first flew in 1942 as a C-47A Skytrain, for the US Army Air Force. In 1943 it was passed over to the US Navy, as an R4D-5. Sometime after the war, the aircraft underwent conversion to R4D-8 configuration, still in the Navy. 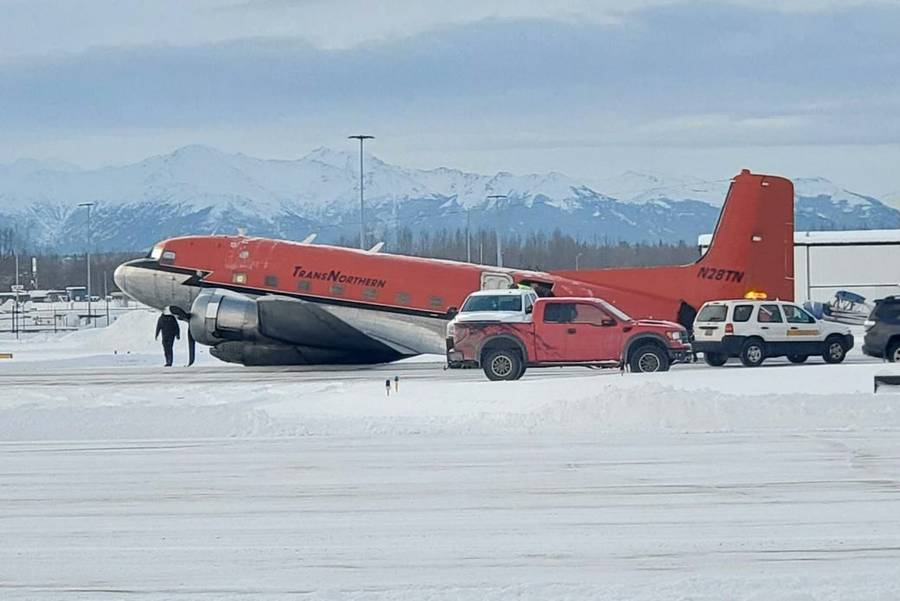 The R4D-8 designation later became C-117D (DC-3S in civilian service), with more powerful engines, a new wing and extended fuselage. This aircraft didn’t leave the military until the 1990s, first operating in Canada, for Kenn Borek Air. Transnorthern picked it up in June 2007.

As we saw, Douglas only made 100 of these aircraft for the US Navy and Marines. Only a handful of them survive today. The Super DC-3 uses a more powerful engine (Wright R-1820 Cyclone, in this case) than the standard aircraft. This is why it needs the larger tail surfaces, to counteract asymmetric thrust when losing an engine. As in this case.

The NTSB has opened an investigation into this accident.