On March 19, 2016 a Boeing 737-800 belonging to FlyDubai crashed into the ground after two failed attempts to land in the airport in Rostov-on-Don, Russia. The aircrew had been flying for over 5 hours when the accident happened and very late at night.

Surveillance cameras at the airport showed the aircraft flying down in a very steep angle before it crashed into the ground and very early on, pilot error and a mysterious illusion known as Somotogravic illusion was suspected to be a part of the cause of the accident.

In November 2019 the Final report ha 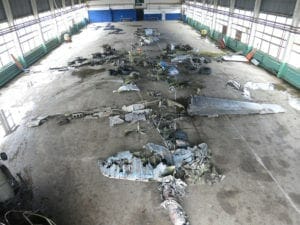 s been released by the Russian Interstate Aviation Committee (IAC), who was in charge of the accident investigation. The main conclusion: incorrect aircraft configuration and crew piloting resulted in the pilot in command losing situational awareness and running the aircraft to the ground. Secondary causes was deemed to include insufficient go-around procedural guidance and functional incapacitation markers by FlyDubai which made it hard for the non-flying pilot to realise that the flying pilot had lost his situational awareness. The second approach was flown in very harsh weather conditions and the Pilots were likely influenced by the fact that they saw the airport on the first approach and was forced to go-around due to a wind-shear warning, that might have made the pilot very go-minded on the second approach and the second forced go-around caught him off guard and led to the subsequent mistakes including a 12 second “nose trim forward” input which would have left the aircraft extremely nose heavy combined with zero or minus G-forces.

Somotogravic illusion is what modern flight simulators are using in order to “trick’ the pilots into believing that they feel an acceleration or deceleration when, in fact, the simulator is only pitching. It is the inability of the human balance organs in the inner ear to distinguish between an acceleration and a pitch with lack of external visual references. During a go-around manoeuvre, an aircraft goes through both a pitch up, to gain altitude as part of the missed approach, and an acceleration to speed the aircraft up and enable flap retraction. This can lead to a sensation of an extreme pitch up as those two factors combine. If the pilots are not aware of this sensation and don’t monitor the instrumentation they can fall victim of this illusion and try to pitch the aircraft forward in order to escape the perceived high pitch attitude. This can lead to a sudden pitch down of the aircraft at low altitude.

Another factor which has been hard to establish the implication of is the use of a HUD (Head up Display) and the lack of objective information of the use of the HUD during extreme weather conditions and negative G-forces. These types of conditions are normally not trained in simulator sessions and it has been impossible to establish wether the HUD indications (where you don’t have to look down on the aircraft screens but rather “through” the HUD for pitch information) had any impact on the situational awareness of the pilots.

Reacting to the final report’s release, FlyDubai released a statement in which it  acknowledges IAC’s conclusions and recommendations. FlyDubai also says that it was fully compliant with all regulatory requirements at the time of the accident, the airline states it took its  obligations “seriously” and has implemented “a number” of precautionary measures since 2016.

“The airline made proactive operational enhancements to both simulator and classroom training to reinforce awareness and enhance understanding of spatial disorientation,” the statement reads. “Furthermore, flydubai made additions to the manufacturer’s standard operating procedures and manuals. All pilots have been trained on these enhancements which exceed regulatory requirements.”

Do YOU want to stay on top of Avaition news like this one? Then Download the FREE Mentour Aviation app!