“Threading the needle”, they called it. The fine art of navigating your way between enemy radar sites without being detected, so you could strike your target without opposition. They can’t shoot at what they can’t see, right?

These days I tend to enjoy more peaceful pursuits in my flight simulation, but back in the day I flew my share of military sims. One of my favourites, at the time, was F-19 Stealth Fighter, a 1988 game from simulation specialists Microprose. It put the player in the cockpit of the F-19 of the title.

….you might say. And you’re right. There isn’t. But what there was was a strong expectation that there would be one: aviation commentators had noticed the lack of an F-19 on the books and speculated that this was to be the long-rumoured “stealth” aircraft. Several popular ideas emerged as to what it might look like, and the game was based on one of these concepts. In fact, the genuine article, Lockheed’s F-117 Nighthawk, was revealed to the public on the same day that the game was released – although to my knowledge the Pentagon did not time this revelation with the specific intention of annoying Microprose. (Microprose in any case went on to release subsequent titles based on the actual stealth fighter.) 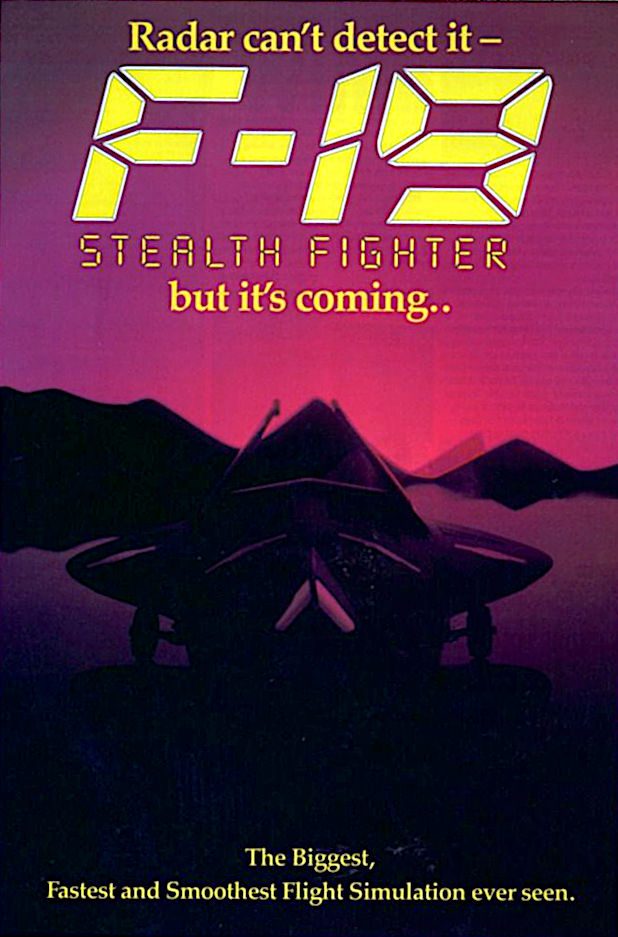 I’ve always been a sneaky gamer. Mostly because my coordination and reflexes aren’t good enough for all this running around doing direct combat. And what do we do when we’re not good at something? We give up and find something else to do no that’s terrible advice don’t do that. Keep trying. Perseverance usually pays off. But I was impatient in my younger days (and still am), and in any case I found that I generally preferred the sort of gameplay that let me take my time a bit more. I enjoyed planning, taking things in sequence, being able to stay back and check out the situation carefully before taking the shot, or launching the missile, or stealing the jewel-encrusted thingamajig (depending what I was playing), and then vanishing like a shadow into the night.

So F-19 appealed to me even then. The core of the game was the imagined aircraft’s stealth technology, and every mission depended using that technology to its maximum effectiveness.

Staying off the Radar

As proved to be the case with the real-world F-117, the airplane in the game relied mostly on its ability to travel undetected, strike quickly, and escape before a surprised opposition force could react. It was not expected, designed or equipped to engage in dogfighting – though it had some very limited ability to do so in an emergency. You could also load it with a couple of spare missiles to take out any ground station that did manage to detect you. But ideally, you’d carry out each mission without being detected at all. 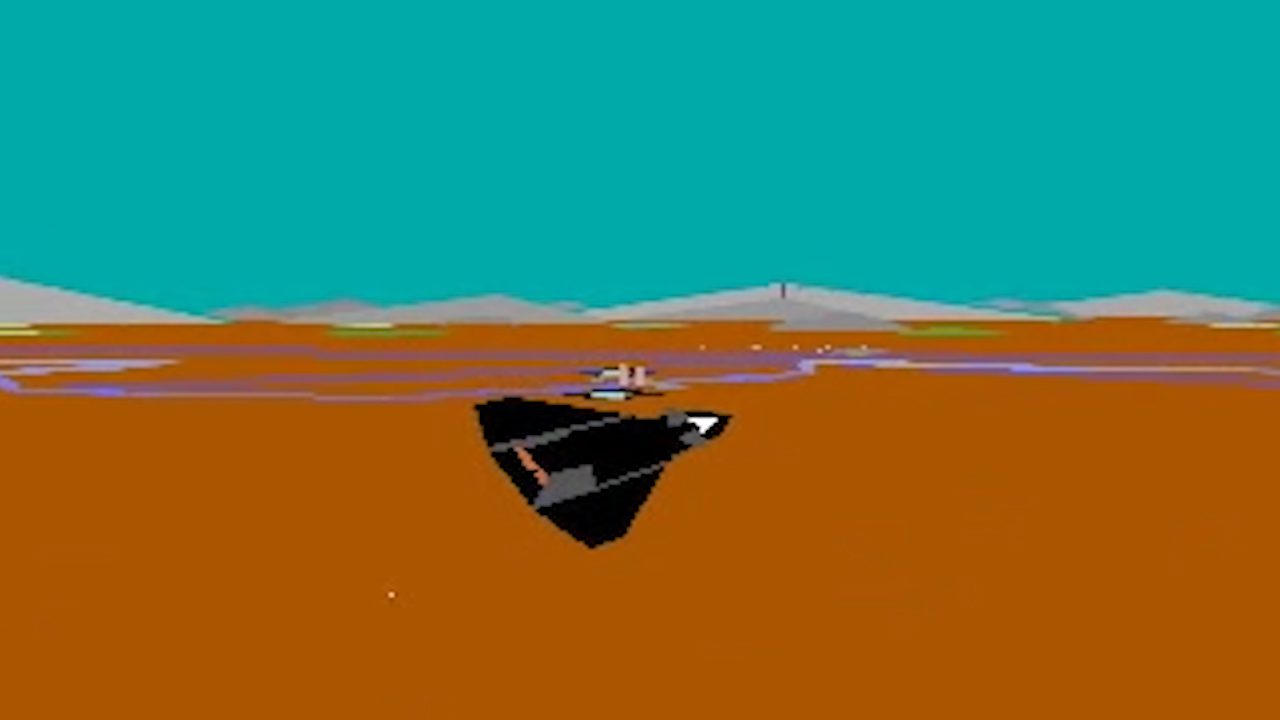 A screenshot from F-19 Stealth Fighter, from Microprose

Admittedly, the game modelled radar fairly simply. Very well for its time, but players couldn’t be expected to be trained in radar engineering or electronic warfare, so the game trimmed down some basic ideas. The enemy fielded two basic radar types: pulse, and doppler.

You were most visible to pulse radar if you were travelling from side to side in its field of view. Flying straight towards it or directly away from it minimised your signature. Doppler radar could see you best if you were changing your distance from the sensor – so to sneak past these meant going around them in an arc at a constant range.

Planning a successful mission would mean plotting a route that passed each radar emitter in the correct way. The real challenge happened when you found a co-located pulse-doppler site, or two separate installations whose ranges overlapped. Then things could get… complicated. Scary complicated. Explodingly complicated.

Still, I got pretty good at threading that needle. And over time, as I became more interested in civil aviation and the systems involved in supporting that, I began to learn more about what real radar does, and what its limitations can be.

Staying on the Radar

Radar is an abbreviation for “Radio Detection and Ranging”. The technology plays an essential role in the management of air traffic. Any flight between any two large commercial airports will be tracked on a number of different radar systems. You’ll no doubt have spotted their emitters if you’ve visited an airport: some of them are quite conspicuous.

The basic radar system – the sort my fictitious enemy was using to try to catch my F-19, is what’s called “Primary Surveillance Radar”. You’ll see these at airports, and they’ll look something like the lower, more oval instrument of the two shown here: 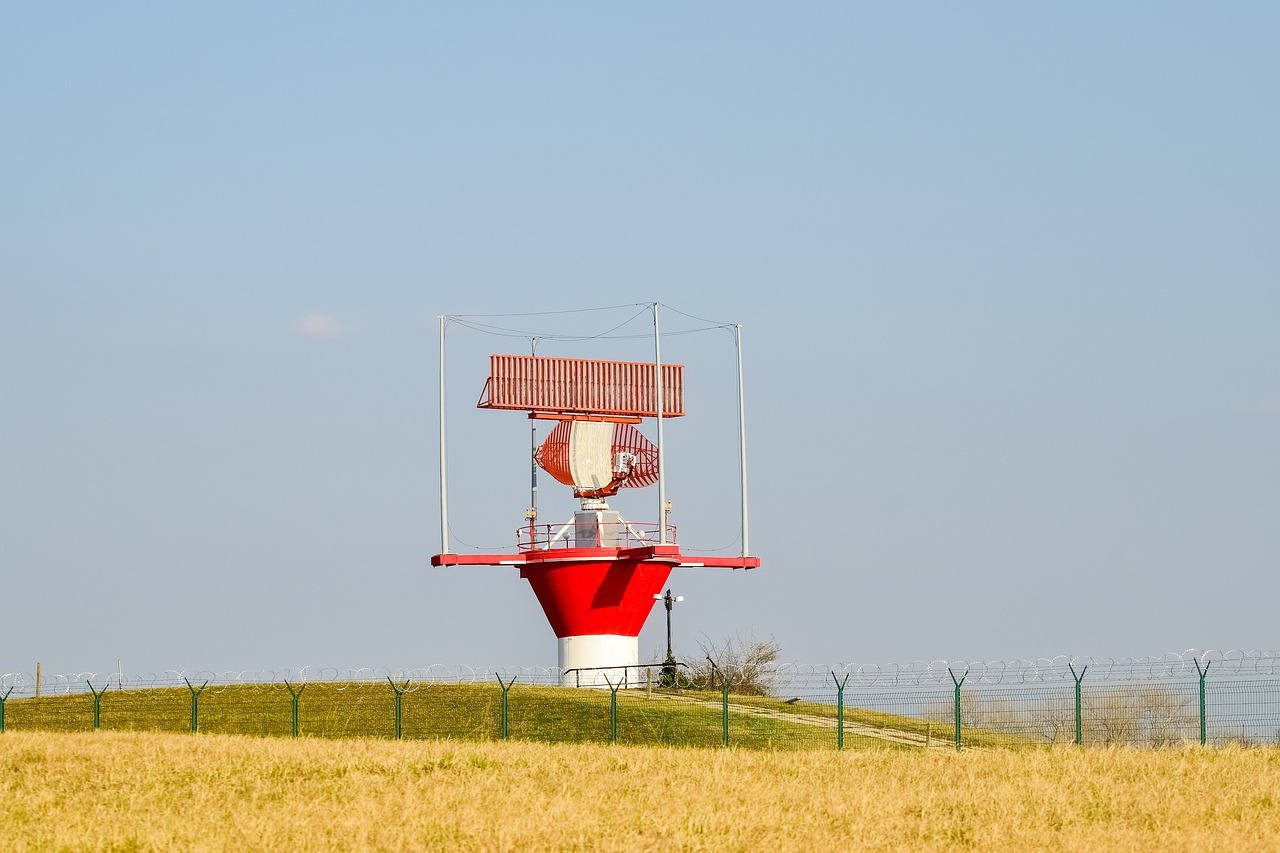 A Primary Surveillance Radar, or PSR, works in a fairly straightforward way. Think of the dish as a powerful torch or flashlight. Its beam shines out in front of it, illuminating anything the light falls onto. If the beam sweeps over an aircraft, some of the radar “light” (in reality radio waves, which are essentially a non-visible form of light) will reflect back and be picked up by the emitter. That reflection will be seen as a contact on the radar scope.

By analysing the radar return, the PSR system can estimate several factors about the contact. Range can be determined by working out how long it took the radar reflection to return. The speed of light is a known constant, so accurate timings can show how far the energy pulse has travelled there and back.

The amount of energy returned will give an idea how reflective the object is, and that will generally give a rough idea of the object’s size. This isn’t always reliable, though. That stealth fighter I used to pretend to fly? Well, one of the aims of a stealth design is to prevent radar waves from being returned directly to the emitter. This is why the F-117 looks so angular: its surfaces are designed at angles that scatter incoming radar energy, minimising direct return. As a result, the fighter produces a much smaller contact on enemy radar screens. 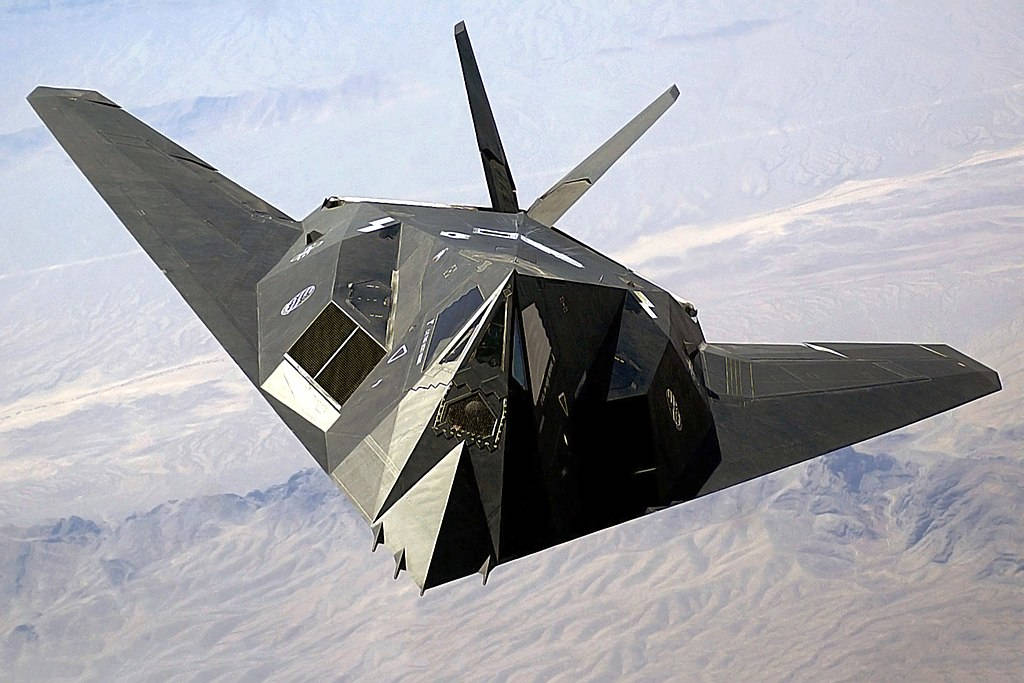 That’s great if you’re trying to avoid detection. But in civil aviation, being seen is the aim. Primary Surveillance Radar gives some basic detail, but it’s not enough to allow air traffic controllers to keep track of where everyone is. For that, you need Secondary Surveillance Radar, or SSR. That’s the little dish on the above image – the one that looks like a kind of narrow fly-swatter kind of affair on the top.

Now this is the clever bit. The SSR isn’t only shining a light out in front of it. It’s also sending a message: a sort of hailing signal that can be picked up by an aircraft’s transponder. The transponder – a portmanteau of the words transmitter/responder – is a device carried by most aircraft that listens out for SSR radar transmissions. When it gets swept by one, it responds by sending a signal in return. This signal carries certain information about the aircraft, including a numerical identification code (called a “squawk code”), and altitude information from the aircraft’s altimeter. The system cross-references this data with the PSR contact and adds it to the blip on the controller’s display. The end result is a comprehensive display of who’s where and what they’re doing. Then it’s just down to the controller to make sense of the mess of blips and lines and numbers and codes on the screen, say the right things into the radio at the right time, and hopefully put everybody where they need to be. Which is to say, either receding into the correct bit of sky, or parked safely on the ground. 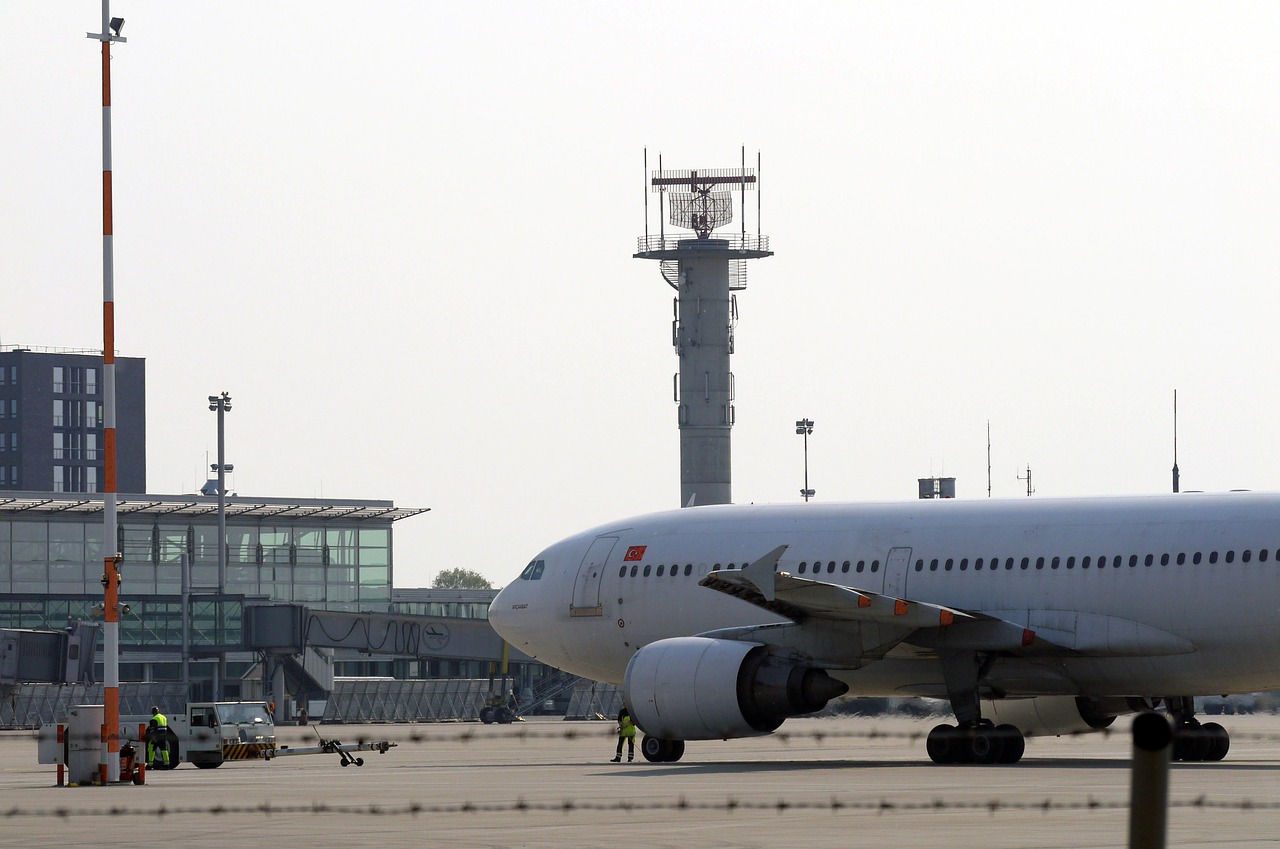 You might think it’s all over once an aircraft’s landed. That would be far too simple. Most major modern airports are a tangle of runways and taxiways, and someone has to keep aircraft and ground vehicles moving around on those as efficiently as others are being guided through the air. That’s the job of the Ground controller, who will usually have another radar to help them out: the Surface Movement or Ground Movement Radar.

This is a short-interval radar that sends a very confined beam over the ground across the airport and, as with the air radar systems, returns reflection contacts and transponder information. This data is then mapped onto a screen display of the airport, resulting in something that doubtless makes sense to people trained and practised in reading it. Systems like this can be invaluable in poor weather, enabling airports to continue operating even when visibility from the control tower is limited.

Radar first came into use in air traffic control quite some time after its invention in the lead-up to World War II. The original, pre-war intent behind “shining massive amounts of radio energy at incoming enemy aircraft” wasn’t actually to detect them. Rather, it was intended as a kind of “ray gun” – a beam weapon capable of injuring and incapacitating the pilots. But it quickly became clear that the technology could better serve as a detection and pinpointing system.

But even then it was rough and, post-war, radar had to be developed and refined for the more stringent safety requirements of detecting and locating civil aircraft (and not frying the crew). Once it got going, though, radar quickly became the central technology for air traffic control and has stayed in that position ever since.

Though, as is the way in all things, time waits for no technology. Modern satellite navigation systems and improved global communications have brought about some significant developments. The Automatic Dependent Surveillance–Broadcast, or ADS-B, system sees the aircraft using on-board GPS and other sensors to collect data about its situation and sending updates to ATC stations. It seems possible that in time, radar, with its inevitable weaknesses such as fading coverage over oceans and more remote regions, will one day be relegated to a backup technology and, perhaps, ultimately replaced altogether.