After years of scientific missions and impressive successes, the SOFIA flying telescope flew its last-ever mission for NASA and its partners.

Hey Neptune. Did you ring? 👋

Webb’s latest image is the clearest look at Neptune's rings in 30+ years, and our first time seeing them in infrared light. Take in Webb's ghostly, ethereal views of the planet and its dust bands, rings and moons: https://t.co/Jd09henF1F #IAC2022 pic.twitter.com/17QNXj23ow

But between the Hubble and James Webb space telescopes, NASA operated SOFIA, i.e. the Stratospheric Observatory For Infrared Astronomy. Thanks to the aircraft’s altitude (41,000 feet – or more!), the telescope is above almost all of the atmosphere’s water vapor. So while it’s not in space, SOFIA has provided scientists with invaluable data about nearby stars and other interesting objects.

Unfortunately for this program, technological advancements in other space observation platforms took away some of its edge. As a result, NASA and its partners took the hard decision to retire SOFIA. And this is a shame, because SOFIA itself required some impressive advancements, to get it where it is today. 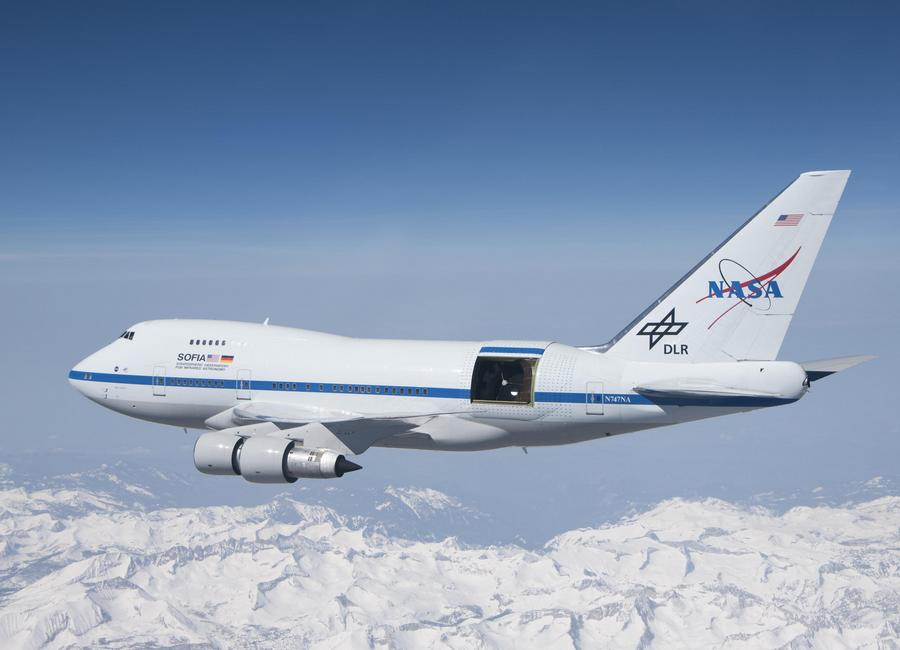 Avgeeks everywhere don’t really need a reason to like a 747. But as we have seen, the 747SP is even more special. To many, this aircraft is the father of the “long and thin” routes, that Boeing first addressed with the 777 and then (more directly) with the 787. Boeing only made 45 of these rare jets. But with SOFIA, NASA and DLR have the rarest of them all.

The telescope that this 747 carries is quite a sizeable load for an aircraft. It weighs 38,000 pounds (over 17.2 metric tons) and its shape has to take into account the platform it’s on. For the aircraft to perform its role, engineers moved the rear pressure bulkhead forward, so that it’s in front of the telescope. But part of the telescope goes through the bulkhead itself, allowing scientists to operate it. 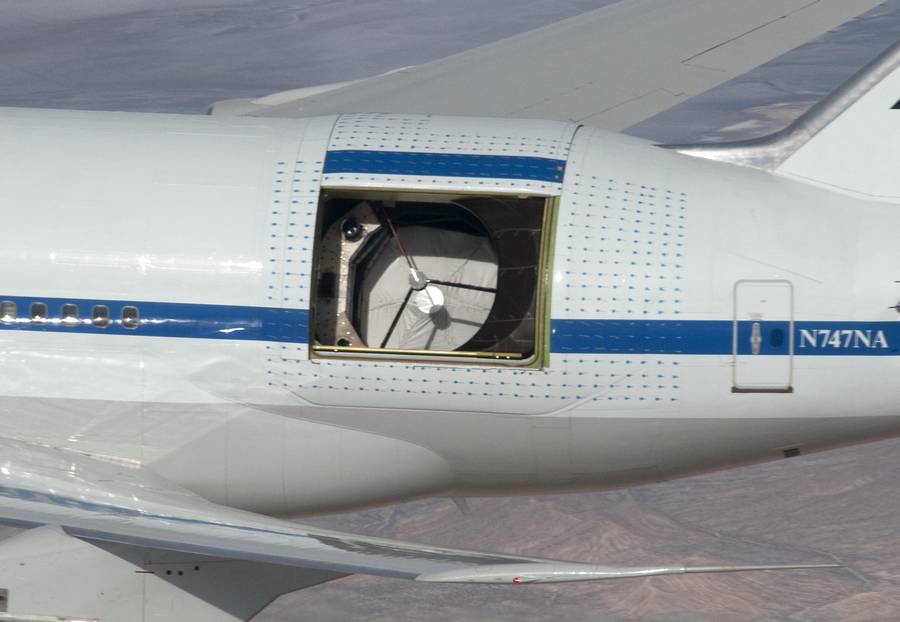 As a platform for a NASA telescope, SOFIA has to do something normally unthinkable in a widebody aircraft. It has to fly with an open door. And besides exposing an expensive telescope to the elements (if any), this has some serious structural implications. Freighter aircraft obviously can’t fly with an open cargo door. The closed door (not just the door frame) ensures that the fuselage remains rigid.

For the telescope on board SOFIA to see the sky, NASA and its engineers had to design a door frame that retains this rigidity with the door fully open. There is no other way to give the telescope and its 100-inch (2.5-meter) mirror a clear view of the sky. At 4.1 meters (13.5 ft) wide and arching 5.5 meters (18 ft) along the fuselage, this is a BIG door. And SOFIA routinely flew with it open at 41,000 feet. 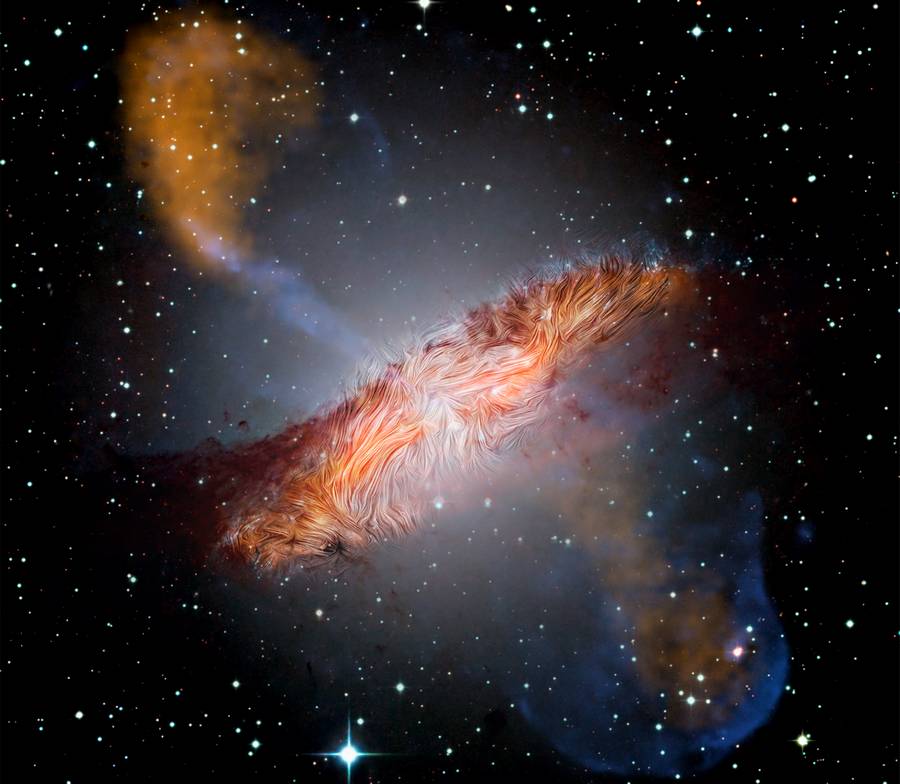 Sometimes it flew even higher than that. On the 28th of September, SOFIA and its crew of NASA and DLR personnel flew it as high as FL450. The flight originated and ended at the Palmdale Regional Airport (KPMD). It had lasted around eight hours, with the aircraft landing on the morning of the 29th. It was the project’s 921st flight.

As an aircraft, SOFIA has considerable running costs, that NASA and its partners can’t ignore. The agency began work on SOFIA in the 1990s, but it only became fully operational in 2014. This happened after much hard work, including improvements in the aircraft, its avionics, and its scientific equipment. 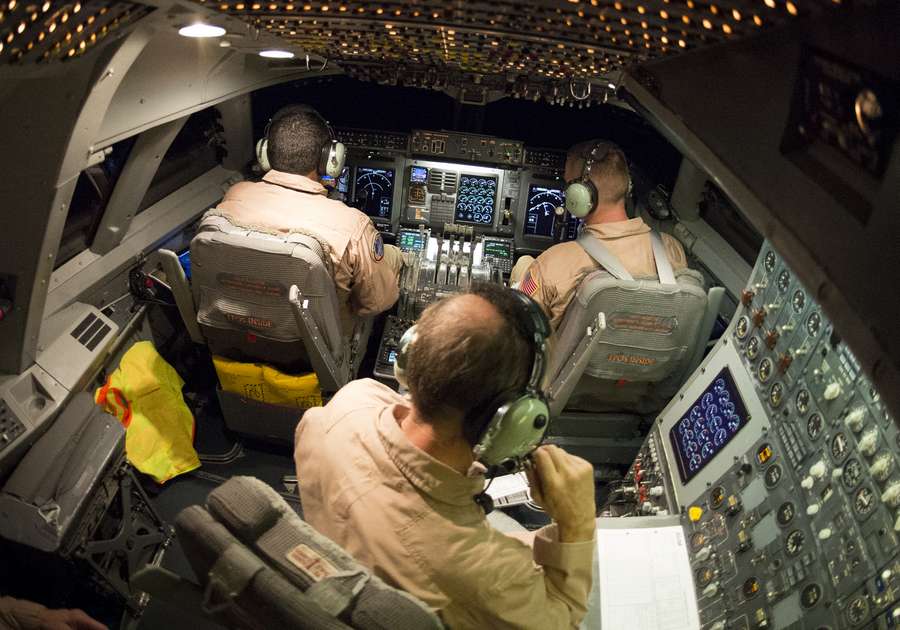 The plane got upgraded EFIS avionics, but it still has a flight engineer position. Photo: NASA/Carla Thomas

Beyond running costs, the program also had to contend with additional obstacles. Back in July, after NASA had made the decision to retire it, SOFIA sustained some damage in Christchurch International Airport, in New Zealand, due to bad weather. This ended the telescope’s last-ever tour of the southern hemisphere.

With its NASA mission now complete, what remains is for SOFIA to find a suitable retirement home. Hopefully, the agency will find a museum with the funds (and room!) for this unique aircraft. And who knows – perhaps further advancements in telescope designs could see it, or something like it, return to the skies again. 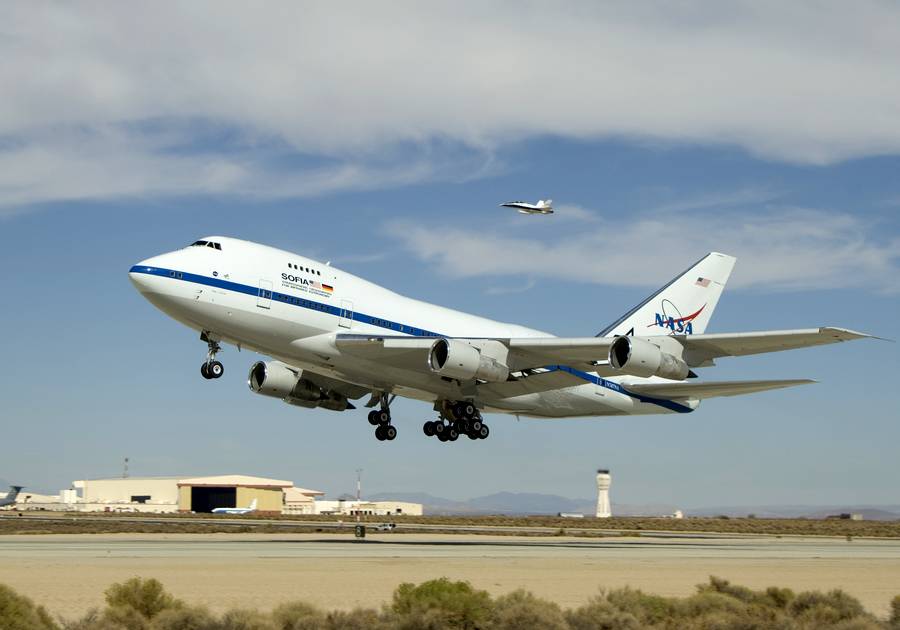 Taking off with a chase plane nearby. NASA photo by Tony Landis

James Webb will operate only until its orbit thrusters run out of fuel. So it won’t have as long a run as Hubble, for example. And while SOFIA is expensive to run, James Webb and other NASA programs are incredibly expensive to launch! So who knows – there may still be a future for a big airliner, flying with a disturbingly big hole in its fuselage.