The AD-1 was one of the many strange aircraft that NASA tested, that are now forgotten. But could newer technologies make it relevant again?

The post-WWII era saw a real boom in aviation development, both military and commercial. The advent of the jet age, along with other wartime technologies, saw an incredibly rapid pace in development. A truly revolutionary design today, could become obsolete six months later. But one arena that attracted the interest of many, was swept wings. 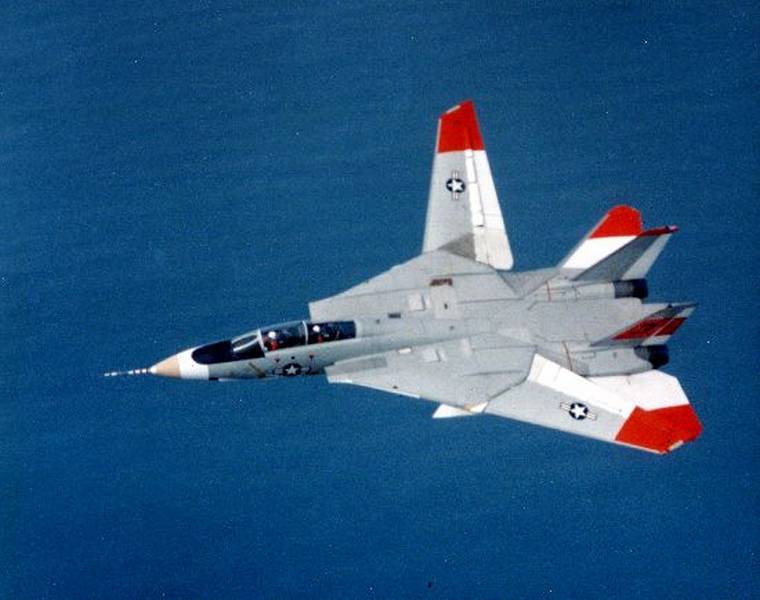 An F-14 in testing, with an asymmetric wing sweep configuration

A swept wing is one whose leading edge is not perpendicular to the aircraft’s longitudinal axis. During the war, well before NASA (let alone the AD-1) existed, engineers knew that increasing the sweep allows for higher speeds. Also, such planes needed higher speeds and long runways for take-off and landing. In an era where airfields were literally fields, this wasn’t always practical.

By the end of the war, things were changing. Scientists and pilots explored the characteristics and intricacies of swept wings, leading to ever-bolder designs. And eventually, they realized that the ideal plane would have straight wings on take-off and landing, and swept ones in cruise. But it wasn’t a plane like NASA’s AD-1, that they wanted. Those designs all had two wings swinging to the rear, independently. 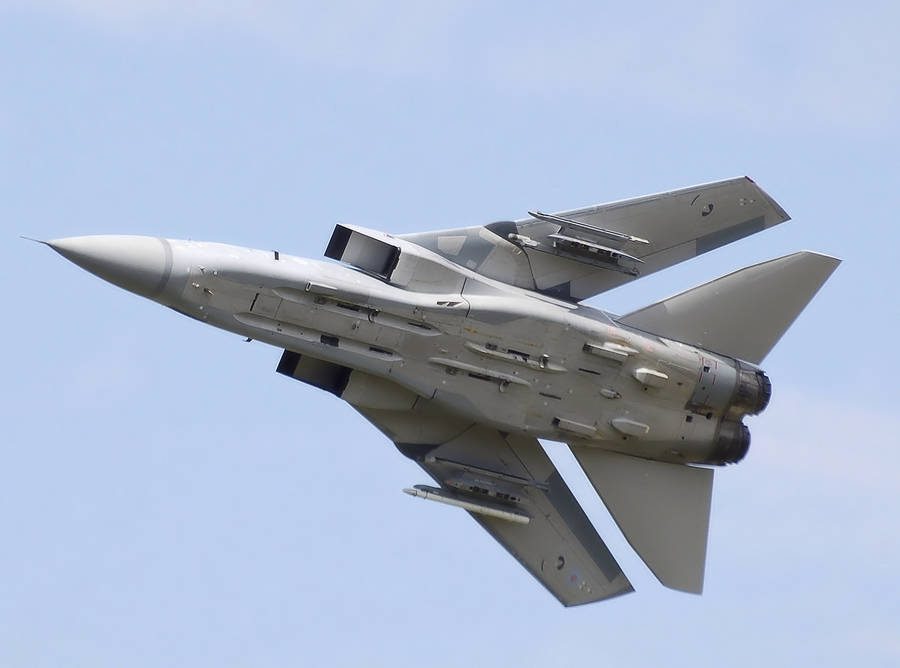 These planes were military. The F-14 Tomcat comes to mind, especially to those of us in a certain age group. But there’s also the F-111, the MiG-23, the Dassault Mirage G, the Sukhoi Su-24 and the Panavia Tornado. At the larger end of the scale, there’s the B-1B and the Tupolev Tu-160. So obviously the concept of these planes has a following. But all of them have a couple of challenges.

What The NASA AD-1 Tried To Solve

Firstly, the mechanism to swing the wings is heavy. In aviation, weight is the perpetual enemy, even for military aircraft. So a configuration that increases empty weight, involves a bit of compromise. Secondly, sweeping the wings changes the center of pressure. This is the point where the total sum of lift acts on the aircraft’s body. When the wing sweeps backwards, so does this point. There are designs with a forward-sliding wing root (Bell X-5), but those are even heavier. 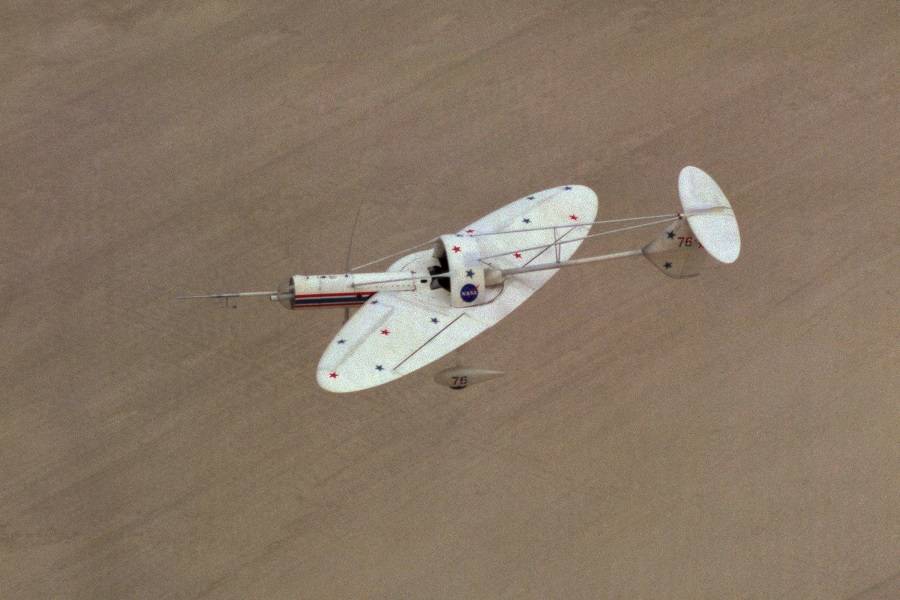 The OWRA, a test drone

And this is where NASA and the AD-1 comes in. The program began in the 1970s, when several swing-wing designs made their appearance. The idea was to create a more efficient transport category aircraft – possibly a supersonic one. Boeing had actually considered a swing-wing version of its SST. NASA’s AD-1 program would demonstrate a much simpler mechanism. As a bonus, this mechanism doesn’t change the center of pressure: one wing goes back, the other forward!

The AD-1 gets its name from Ames-Dryden, the two NASA agencies participating in the project. AD-1 was the name of the aircraft, but it was also the name of the overall project. And this project included other aircraft! Before the AD-1, the largest such vehicle to fly was the NASA OWRA: Oblique Wing Research Aircraft. This small vehicle had a camera in the nose, for its remote operator. It also had an interesting ducted fan setup. 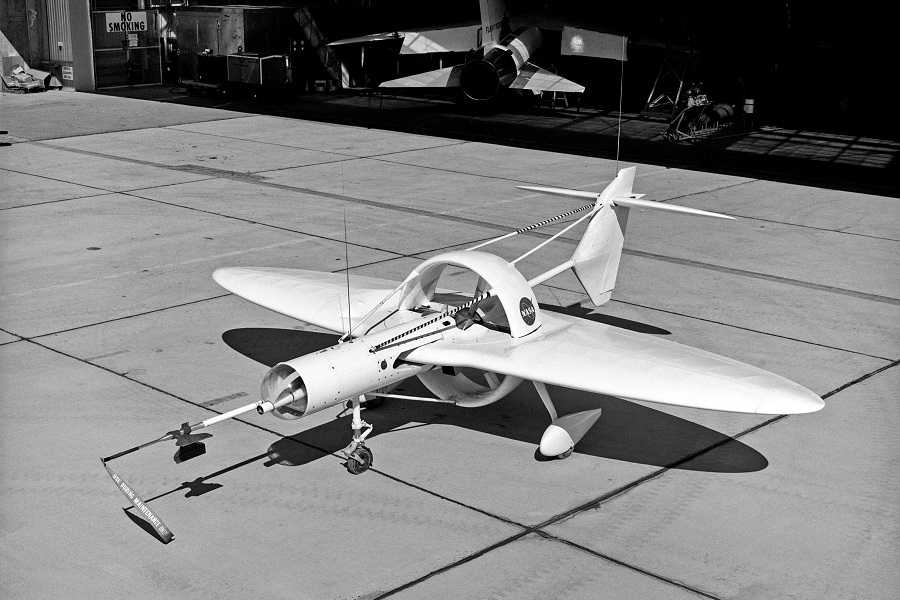 So, the AD-1 was the first project aircraft with a pilot on board. It would be a low-speed test aircraft, staying below 150 knots. It even had fixed landing gear. However, it had two small turbojet engines, each producing 220lbs of thrust. The goal was to explore the handling characteristics of such an aircraft, before building faster versions. The hope was to make the plane work while achieving great gains in fuel economy, through drag reduction.

The Rutan Aircraft Factory built the AD-1 for NASA. This company would later change its name to Scaled Composites. The company and its founder, Burt Rutan, deserve their own article, because this isn’t the strangest-looking plane they built! Not even top-five material, probably. Unlike his other projects, this wasn’t his own design, as NASA specified its aerodynamic configuration. But Rutan engineered and manufactured the jet. 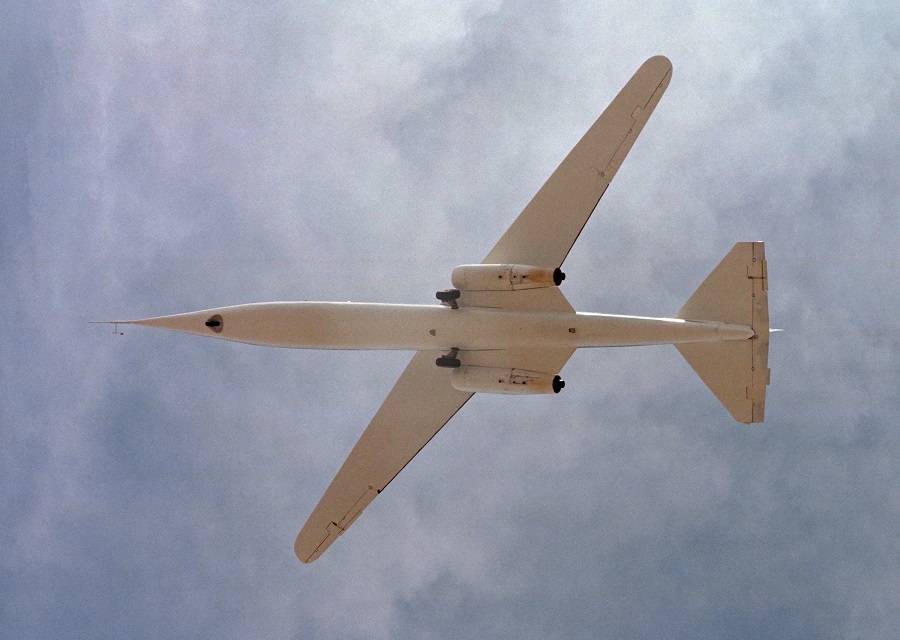 The AD-1 from below

The aircraft flew from late 1979 to mid 1982, with at least two different pilots. By all accounts, the aircraft didn’t handle very well. It exhibited pitch-roll-coupling effects, with the wing at high sweep. This means that when pilots pulled back on the stick to pitch up, the plane would also have a tendency to roll. And vise-versa.

It seems that NASA pilots didn’t find the AD-1 pleasant to fly, particularly with a sweep over 45 degrees. This sweep would get as high as 60 degrees. Also, the fiberglass structure likely didn’t have enough stiffness, to deal with aeroelastic issues, from unusual forces in the system. 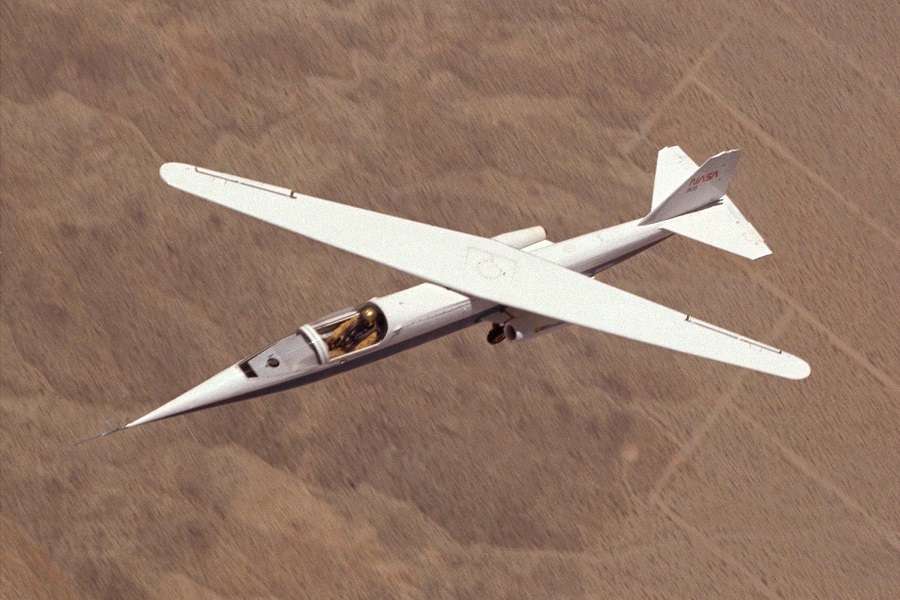 The plan was that NASA would follow up on the AD-1 with another, faster vehicle. This would explore the transonic speed range. It didn’t happen. And this really matters, because a high-speed vehicle would have been key in understanding the true potential of the technology. At its low speeds, the AD-1 only aimed to give NASA a better understanding of the control challenges involved.

And this raises an interesting question. With fly-by-wire now being common in transport-category aircraft, would it be worth revisiting this idea? With advances in CFD computing, sorting out the stiffness issues wouldn’t be insurmountable, either. But this would depend on other advances in design, that may make this technology simply unnecessary. 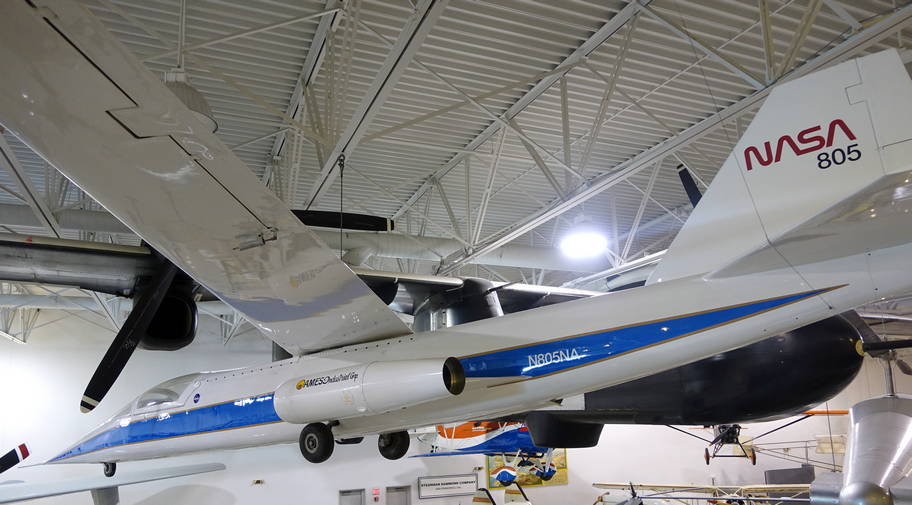 After its retirement from NASA, the AD-1 is on exhibit in the Hiller Aviation Museum in San Carlos, California. As for a follow-up, the intent was to produce a supersonic test aircraft, this time using the airframe of the F-8 naval Fighter! This is a high-wing aircraft, whose configuration suited the project. And NASA already had one, for research purposes. And it got to test fly-by-wire systems, while they had it…

Unfortunately, despite a lot of design work and testing, the test F-8 aircraft never got its oblique wing. The AD-1 remained the only manned oblique wing aircraft that NASA tested. But the idea remains an intriguing chapter in the agency’s history.

There is much more detail, about the challenges and design decisions around NASA’s AD-1. For a very detailed deep-dive into it, click here.