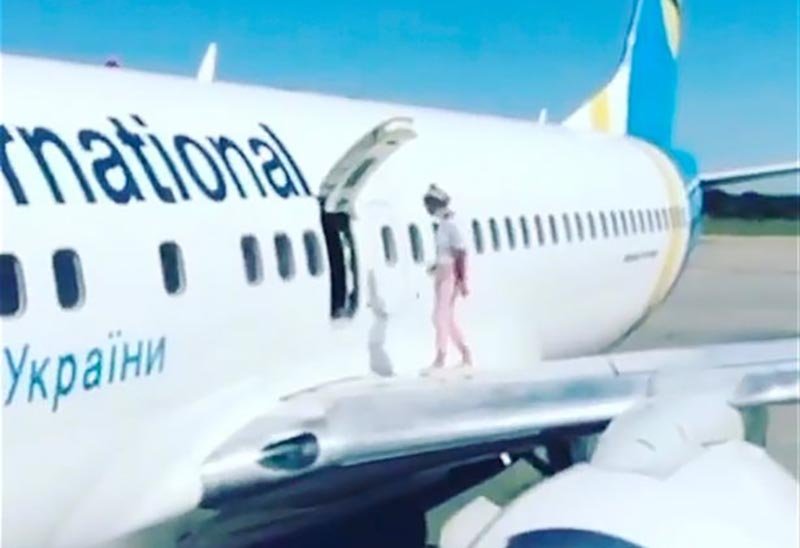 A mum-of-two from Ukraine has been banned from flying after an incident that took place earlier last month. The passenger was returning from a holiday in Turkey, when she used the overwing emergency exit doord to step out of the plane and onto the wings, shortly after it touched down at Boryspil Airport in Kyiv.

The Incident in Full

A woman shocked her fellow passengers when she walked out of a plane and onto the wing of the jet to cool down.Footage shows the woman walking on the wing after she opened the emergency exit because she was “too hot”.

The overheated passenger can be seen on the video clip standing on the wing of the Boeing 737-800 aircraft following the flight from Antalya.

“The aircraft landed and almost all the passengers got off. She walked almost all the way from the tail to the emergency exit row, opened the door and went out. By that time her two children were outside the plane and standing right next to me. They were surprised, saying: ‘This is our mum’.”

The pilot called for an ambulance, police and the airports border force officers.

The woman – who clambered safely back into the aircraft – was unable to explain to police the reason for her incredible behaviour at the time. She later told the authorities she was too hot thus thinking it was acceptable to step out onto the wings. The woman was travelling with her husband and two children for a family holiday before the start of the new academic year.

Following the incident, the airline (Ukraine International Airlines – UIA) has banned the passenger from flying with the airline in future, saying she “was blacklisted for gross violation of aviation safety rules and behaviour on board.” The airline further added “she deserves to pay and exceptionally high financial price for her conduct onboard”

The woman tested negative for both drugs and alcohol on the scene.

What are your thoughts on this incident? Does the woman deserve a lifetime ban? Let us know in the comments!