After a month and a half on Mars, NASA is preparing the Ingenuity helicopter for the first ever aerodynamic flight on another planet!

It is only going to be a demonstration, as they’ve said repeatedly. NASA has been managing the public’s expectations for this flight. The challenges are certainly enormous. The helicopter’s batteries have already faced extreme temperatures on their way to Mars. But this was only part of the challenge. The Ingenuity Mars helicopter still needs to keep warm autonomously, in the extreme day/night cycle on the planet’s surface. But first, it needs to finish unpacking itself. 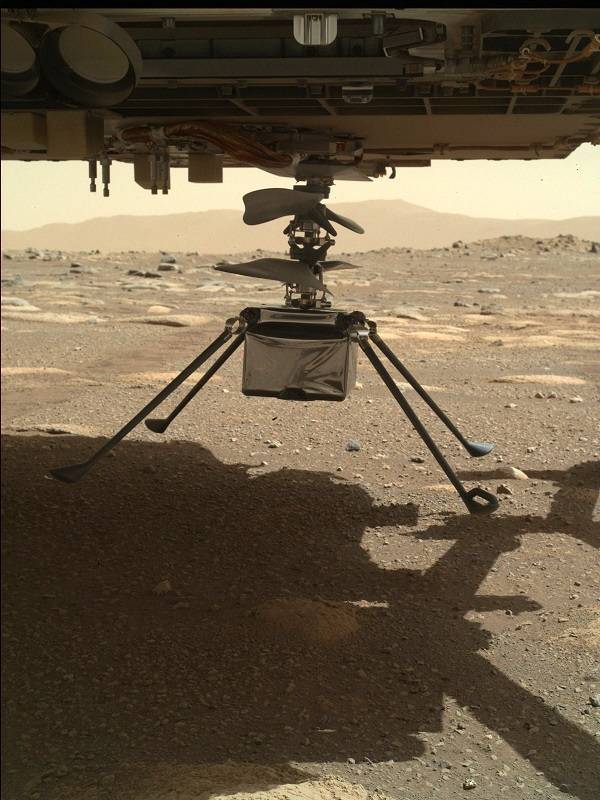 Not an illustration, this is an actual photo from Mars! Source: NASA JPL

There is a series of milestones that the Ingenuity helicopter has to reach, to operate successfully on Mars. Surviving the launch, cruise and landing on Mars were first. We are currently going through the second milestone: deployment from the belly pan of the Perseverance rover. Today NASA published a picture (above) showing Ingenuity’s progress. The Ingenuity helicopter extended its four legs, and is about to touch the Mars for the first time!

That step (touching Mars) means that the Ingenuity helicopter will be autonomous, from that time onward. Which brings us to milestone 3: keeping warm autonomously. Night temperatures on Mars can reach -90°C (-130°F). Ingenuity has to brave them AND charge itself by day, using its solar panel – the latter being milestone 4. Milestone 5 comes at around the same time, and involves establishing communications with the rover, orbiting satellites and Earth. 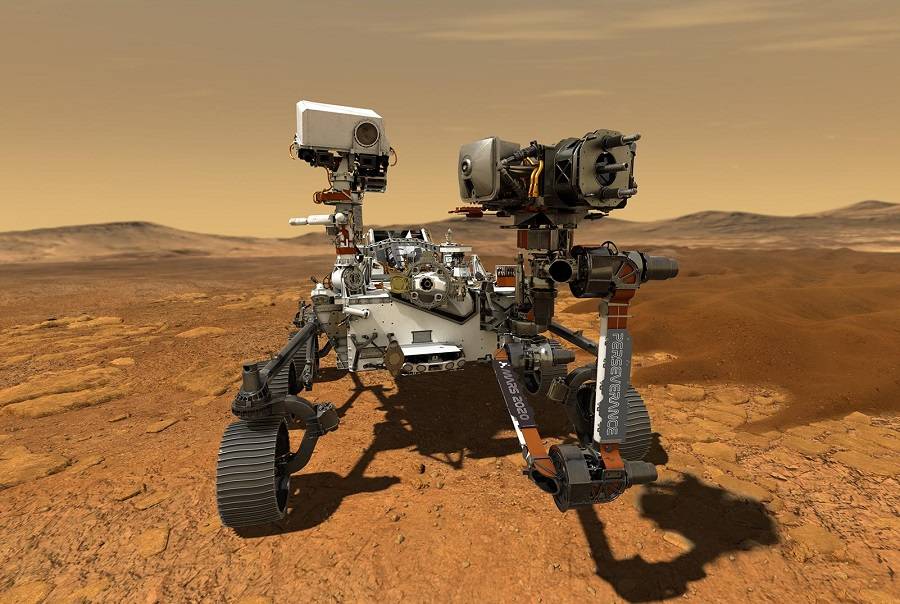 All charged up, Ingenuity will then spin up its helicopter blades for the first time on Mars. This is the final milestone, before it recharges again and attempts a take-off. Again, NASA is keeping expectations low here. Even one successful lift-off, flight and landing, will be a huge success. In a perfect world, NASA would like to do a total of five flights, each lasting 90 seconds. This would happen over a period of 30 days. The theoretical range of the helicopter is 300 metres (980’) but actual flights will likely be considerably shorter.

If the Ingenuity Mars helicopter is successful, it will add another string in NASA’s bow, regarding flight in other worlds. Until now, NASA could use rockets and parachutes, to fly vehicles on planets and moons. Aerodynamic flight has been an intriguing prospect for NASA, for some time now. But with Mars’ extremely thin atmosphere, the Ingenuity helicopter flight is a difficult first test for NASA. 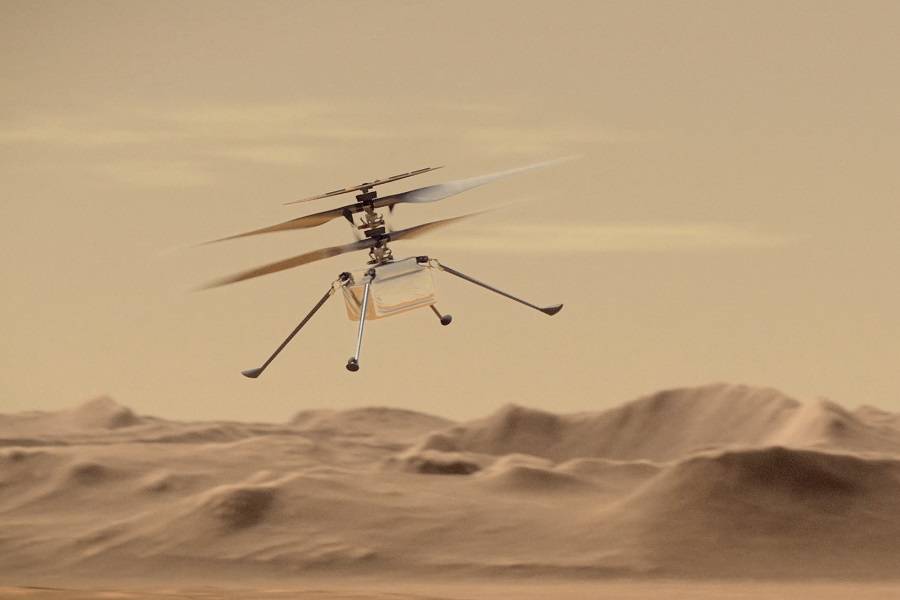 Other Worlds: Helicopters, Or Something Else?

However, the story could be different elsewhere. Saturn’s Titan, for instance, has an atmosphere thicker than Earth’s. A helicopter would have a much easier time flying there than Ingenuity will, on Mars. But there would be different challenges in such an environment, like the lack of sunlight. A small, lightweight solar panel wouldn’t really work there.

Incidentally, if you happen to have an interest in drones, the design of the Ingenuity Mars helicopter may surprise you. When it comes to ‘simple’ drones, we are more used to seeing quadcopter designs. This is because these drones can work fine with very simple fixed-pitch propellers. They don’t need variable pitch or more complicated trickery – unless they get rather big and heavy, anyway. 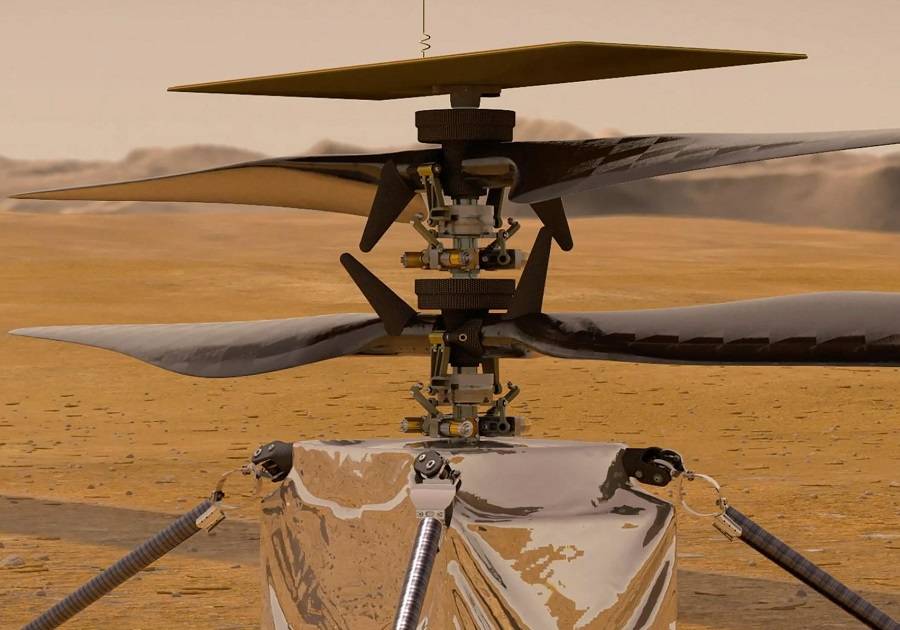 A closeup of the rotor system on Ingenuity (illustration)

But with an atmosphere as thin as that on Mars, propeller size trumps all other parameters. Four small propellers can’t do the work of two full-width, contra-rotating props like those on the Ingenuity Mars helicopter. However, very little (if any) of this would apply to a machine flying on Titan. A substantially different solution would be preferable there – perhaps even a lighter-than-air machine..?

Back to Mars, the Ingenuity helicopter will take a few more days to complete its remaining milestones, before flight. At the moment, NASA puts that first flight at “no earlier than April 8th”. Still, even with managed expectations, the prospect of aerial Mars photos must be hard for NASA’s people NOT to try and imagine..!