The flight crew of a Q400 in Australia omitted to retract their aircraft’s landing gear, until the cabin crew told them, later in the flight!

This incident happened on the 12th of July last year. Australia’s ATSB (Australian Transport Safety Bureau) recently released their final report on it and the airline’s subsequent actions. It involved QantasLink flight QF-2213, from Sydney Kingsford Smith Airport (YSSY) to Albury Airport (YMAY) in Australia. There were 22 passengers, 2 flight crew and 2 cabin crew on board. 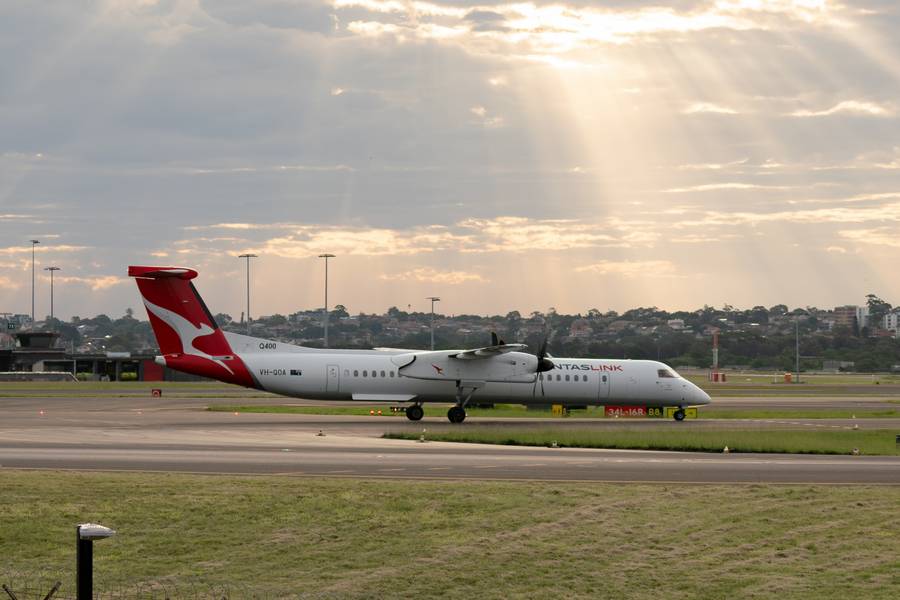 The sequence that led to the Q400 crew to forget retracting their landing gear started on the ground. Because the aircraft was so light, the pilots decided to make an intersection departure, rather than go to the start of the runway. But this would require a different (higher) flap setting than what the crew would normally use. The crew briefed the process, verifying their calculations.

The higher flap setting meant that they would have a lower maximum flap extended speed. And in combination with the aircraft’s lighter weight, it meant having to watch their speed closely, during departure. This was one factor that would influence the Q400 crew and its calls to raise the landing gear. Another factor was a deferred maintenance item, relating to propeller balance. 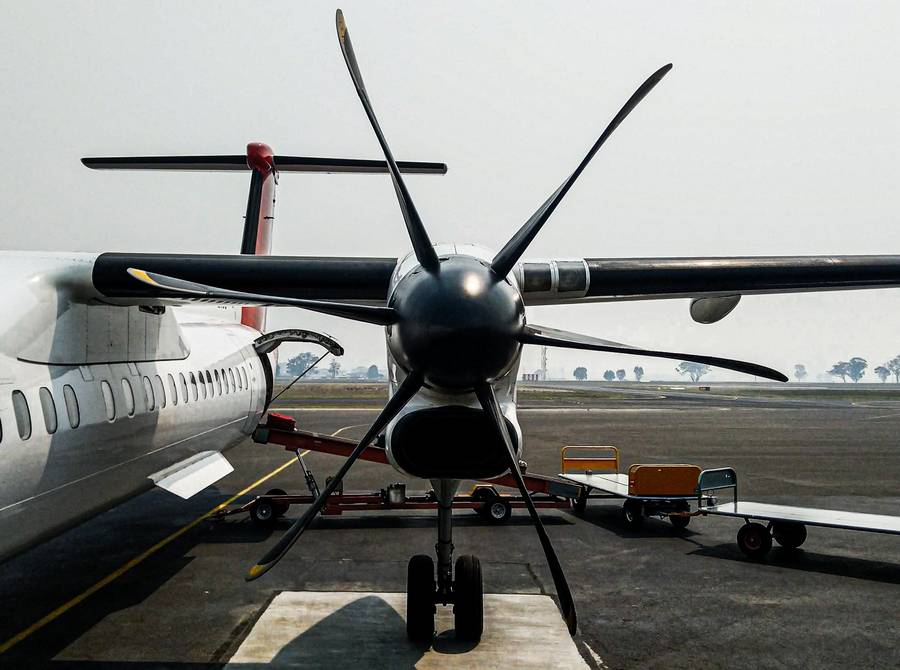 Seeing But Not Saying

The First Officer was Pilot Flying (PF), the Captain being Pilot Monitoring (PM). The crew took off, with the Captain later recalling being focused on their speed. As PM, the Captain should have made the call “Positive Rate”, which would then cause the PF to say “Gear Up”. But despite noticing the aircraft’s positive rate, the Captain did not verbalize the call. So, with neither crew member noticing anything out of the ordinary, the landing gear of the Q400 remained down.

Afterwards, the crew had to make a turn, which was part of their standard instrument departure. Later, the crew retracted their flaps, making normal calls and responses. They then continued their climb, doing 210 knots. Then the Q400 crew had another opportunity to notice the position of their landing gear: the after-takeoff checklist. 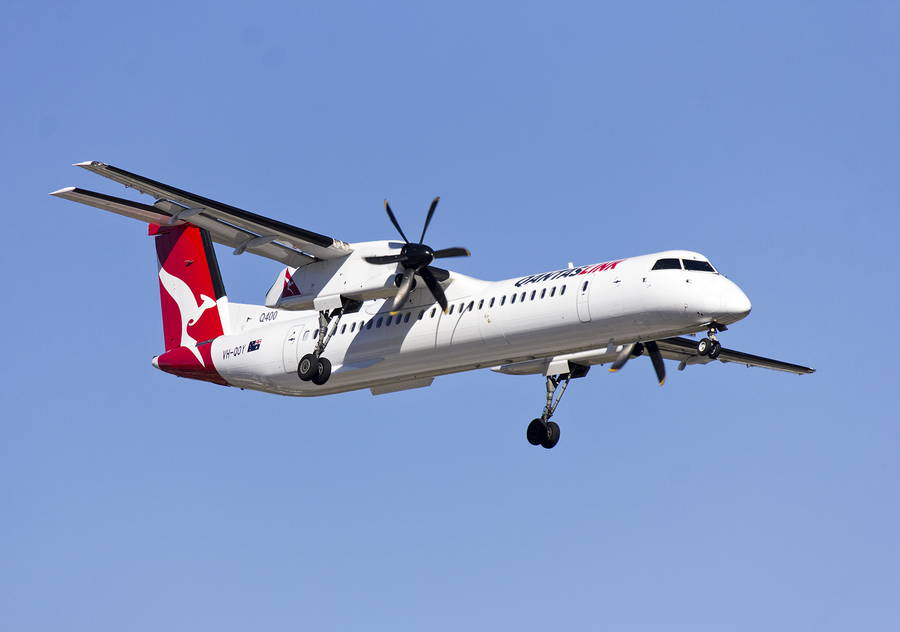 The first item on this checklist is “landing gear”. As pilot-monitoring, the Captain called out “landing gear”, the FO responding “up, no lights”. Both pilots have to look at the position of the gear. However, neither took in that the landing gear lever of their Q400 was down, and there were three green lights. The Captain later reported noticing the three green lights. But their colour did not jump out to the Captain as an abnormal condition for this stage in the flight.

What DID stand out to both crew members was some unexpected noise and vibration. Again, the FO thought this could relate to flaps or landing gear. Like the Captain, the FO noted the green lights, without thinking that they were abnormal. Then the Captain remembered the propeller balance deferred maintenance item. 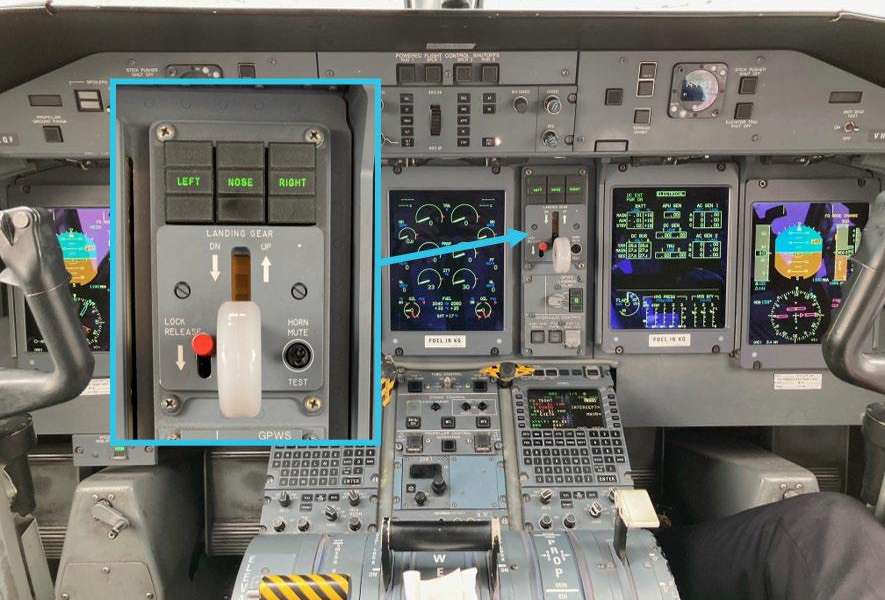 Not thinking of the landing gear, the Q400 crew suspected that the propellers could be the source of the vibration and noise. So they reduced their climb speed, to 185 knots. This reduced the noise, which reinforced the crew’s first impression. At that moment, the aircraft was climbing through 6,000 feet.

Later, the First Officer, as Pilot-Flying, made a public address call. One significance of this call is that it tells the cabin crew that they can now contact the pilots more freely. After this call, the cabin crew contacted the pilots. The Q400 is a high-wing aircraft, with the landing gear mounted on the engine nacelles. This means that the passengers and crew can see that the landing gear is down! 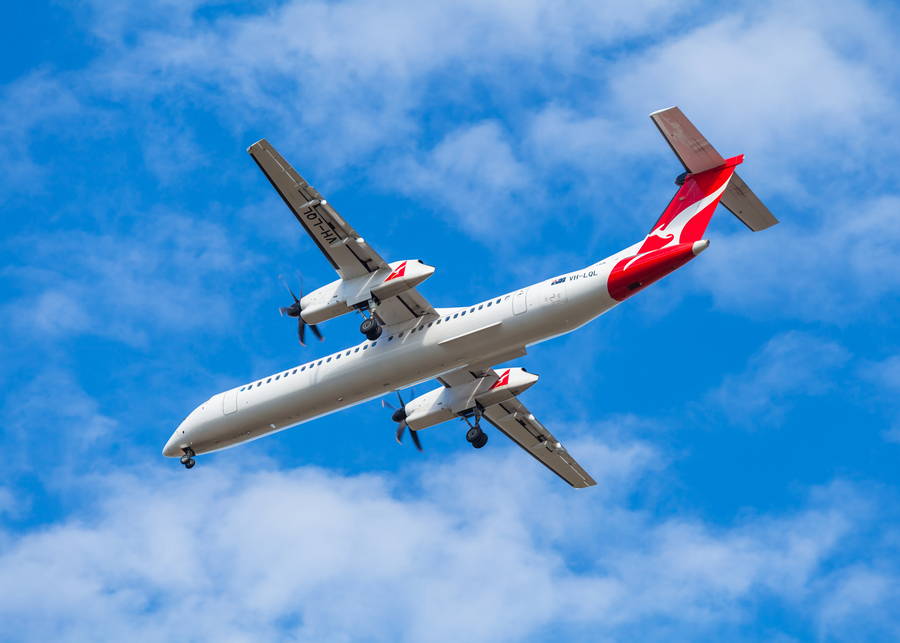 A cabin crew member brought the extended landing gear to the attention of the crew, asking if it was normal. This is when the two pilots realized what happened. They then confirmed that they were below the landing gear’s maximum operating speed (200 knots). At this point, the Q400 crew finally retracted their landing gear. The maximum speed the plane had reached was 210 knots, below the gear’s maximum extended speed of 215 knots.

This action stopped the noise and vibration that the crew observed previously. In hindsight, the Captain realized that a propeller imbalance could not have caused it. But there was one landing gear limitation that the crew exceeded. When they raised the gear, they were at 15,900 feet. The Q400 has an altitude limit of 15,000 for flight with extended landing gear.

The crew continued their climb, reaching FL240. They then contacted company maintenance, informing them of the altitude limitation that they exceeded. As a precaution, maintenance directed them to return to Sydney. The crew landed there without incident. The flight had lasted about an hour, the aircraft returning to service sixteen and a half hours later. 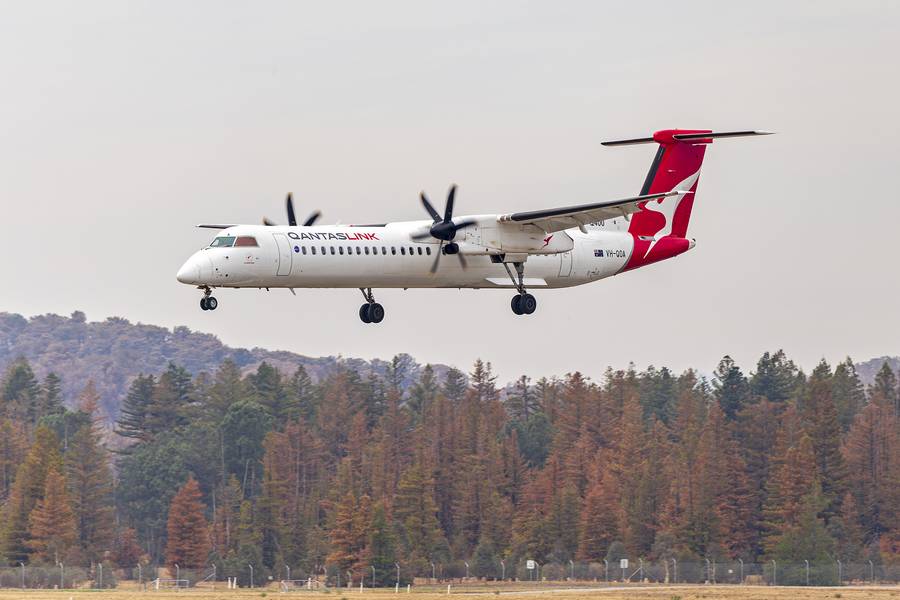 This altitude limitation is more of an operational nature, rather than a technical limit. The aircraft manufacturer confirmed that it has demonstrated that the Q400 can operate its landing gear safely above the limit. So no additional inspection was necessary after this incident, explaining the plane’s quick return to service.

The investigation concentrated on the human factors that led to this incident. QantasLink (and its operator, Sunstate Aviation) add a safety pilot if the crew haven’t flown for a long time. This event took place during a flight ramp-up period in 2021. But this wasn’t a factor in this flight. However, investigators noted that there had been several similar incidents in the past.

Crews flying the Q400 and other types generally forgot to raise the landing gear because of distractions and/or unusual workload. Recent examples include birdstrikes, an APU caution light, traffic, weather causing modifications in departures and ATC calls. Investigators noted that in some cases, one or both crew members saw the three green lights. But in the words of one pilot, “everything appeared normal, all the symbols were green”. 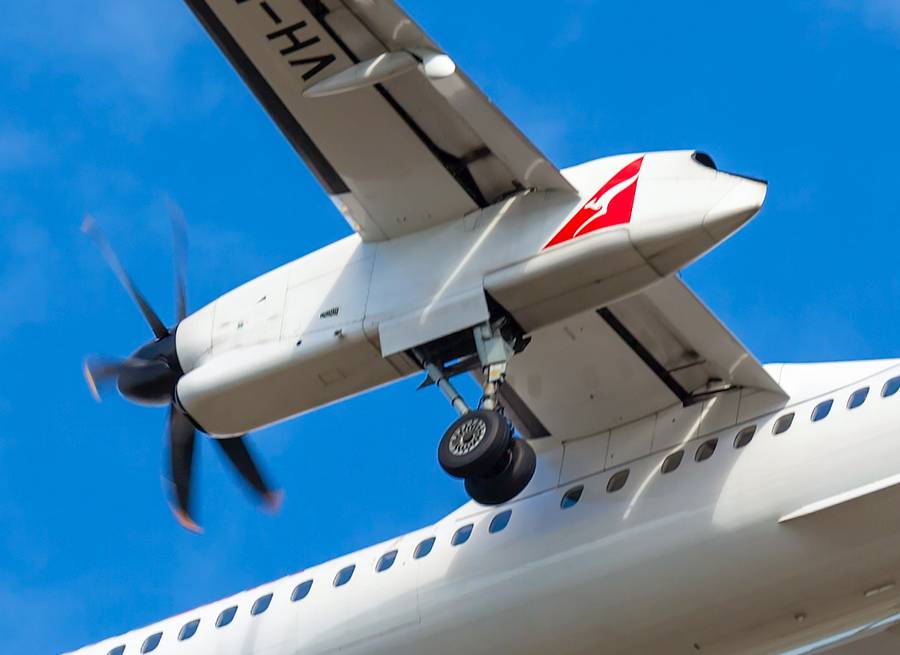 To this crew, the unusual (to them) flap setting and the light plane’s performance were their distractions. The First Officer had flown less than usual but had recently passed a proficiency check. The Q400 Captain, who missed the initiating “positive rate” call for the landing gear, had been flying regularly. In terms of flight hours, the Captain had 15,870 hours total (12,280 on type), the First Officer 1,470 hours, of which 1,215 on-type.

After the incident, the airline took three actions. Firstly, the two flight crew members got additional simulator and human factors training. Secondly, the airline published an article on the occurrence, for the rest of its crews. And thirdly, it initiated a program of focused risk monitoring for its operational ramp-up, during the COVID-19 pandemic. This includes metrics on human factors and performance and crewmember well-being, among others. 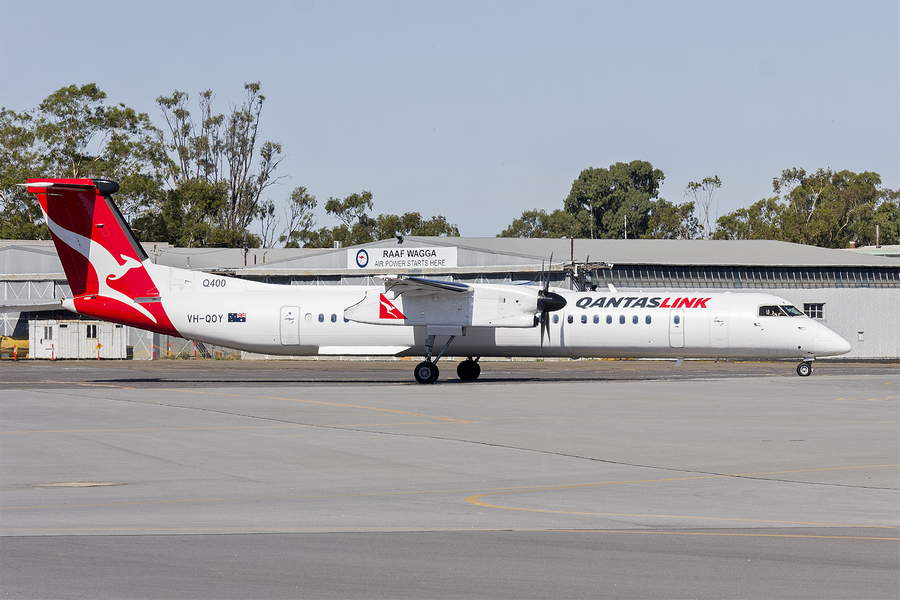 Finally, the investigators commended the vigilance of the cabin crew, raising the alarm for the landing gear of the Q400. There have been other cases where crews didn’t realize that their gear was down until they tried lowering it, near their destination.

We recently saw a case of another Q400 crew, who could not raise the landing gear because of a hydraulics issue. But they continued to their destination with the gear down, at an appropriate speed. This wouldn’t be a practical proposition for most jets but can be an option in some instances with the Q400.