An Airbus A320 belonging to Batik Air, landed back in Jambi, Indonesia, with the nose gear rotated 90 degrees. There were no injuries.

The A320 was performing Batik Air flight ID-6803, from Jambi (WIJJ) to Jakarta (WIII). The aircraft took of using runway 31, on Saturday, at around 13:00 local time. However, the crew stopped the climb at 3000 feet. They reportedly received an indication of a possible problem with their landing gear. Notifying ATC, the crew decided to return back to their origin airport. They briefly went in a hold while running their checklists, and came in for landing.

Batik Air A320 returns to Jambi Airport in Indonesia after a technical problem with its landing gear. Passengers disembarked safely on the runway. https://t.co/Zn1Rg1NHUr pic.twitter.com/yll1KjHu7x

The Batik Air A320 landed back on runway 31, with their nose gear rotated at 90 degrees. People on the ground observed sparks and smoke from the nose gear. As with previous similar incidents, the nose gear leg stayed intact. And while the tyre and wheel had severe damage, there was no serious fire hazard to the plane. The aircraft spent only 25 minutes in the air.

On board the Batik Air A320 were 114 adults, two children and a toddler, as passengers and six crew. There was no evacuation or injuries after the incident. The passengers deplaned using air stairs, on the runway. Airlines had to cancel or reschedule five other flights, due to the closure of the runway. The airport reportedly lacked the necessary equipment to move the aircraft. So the airport remained closed for the rest of the day, waiting for equipment to arrive. But in any case, this airport operates only for evacuation purposes.

Batik Air’s A320 And Aftermath

The incident aircraft is a Batik Air Airbus A320-214, registration PK-LUT. It’s quite new, at just under four years old. Batik is the first and only operator of the aircraft. A Batik Air spokesperson, Danang Mandala Prihantoro, made this statement about the incident:

“After take-off, the pilot decided to return to the airport of departure because there is an indicator in the cockpit, that there may be a technical problem. Batik Air apologizes for the inconvenience that has arisen so that the flight of ID-6803 guests was disturbed. Batik Air has provided a compensation service for delay of departure, based on applicable regulations.” 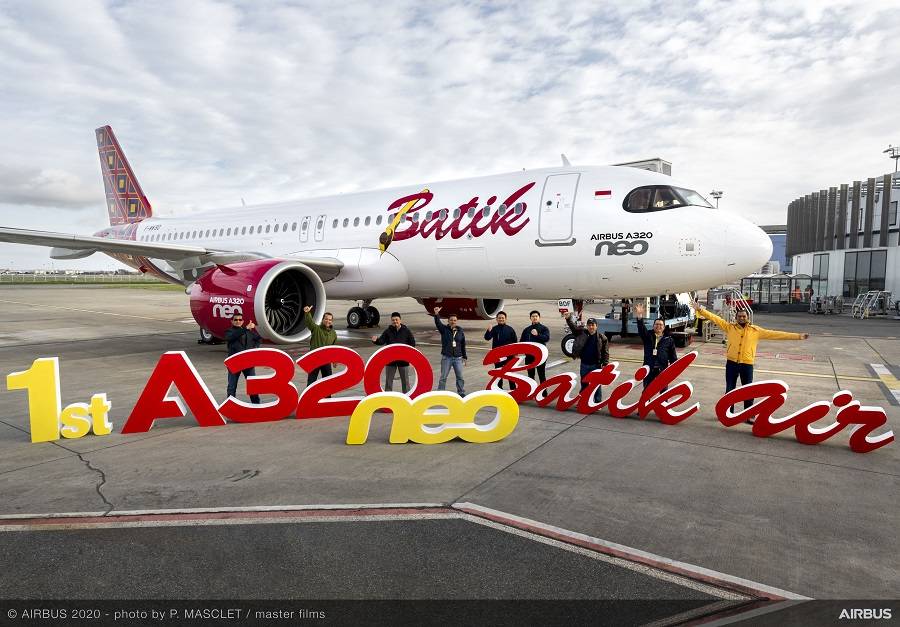 The airline got its first A320neo last year

Saturday’s Batik Air incident is now the sixth time we see an A320 suffer this fate. The previous such incident happened just a month and a half ago, in Basel, Switzerland. That one actually involved an A320neo. Before that there was another incident in Spain in 2011. Before that we had the one you probably remember: JetBlue at LAX, in 2005. And there had been another one before it in Columbus Ohio, in 1999.

Fortunately, in all cases the aftermath was the same. The tyre left the wheel and the wheel was partly ground away. But most importantly, the gear strut stayed in one piece, and everyone escaped injuries. Batik Air’s A320 had the same conclusion.