A B-2 Spirit bomber ended up stopping off-runway when it landed at its home base following an in-flight emergency. There were no injuries.

The incident happened two days ago in Whiteman Air Force Base (ICAO: KSZL) in Missouri, USA. Whiteman AFB is the home of the B-2 Spirit bomber fleet. The incident caused a TFR (Temporary Flight Restriction, still in effect) over the already tightly-controlled airspace around the base. However, there was very little more information on the incident. 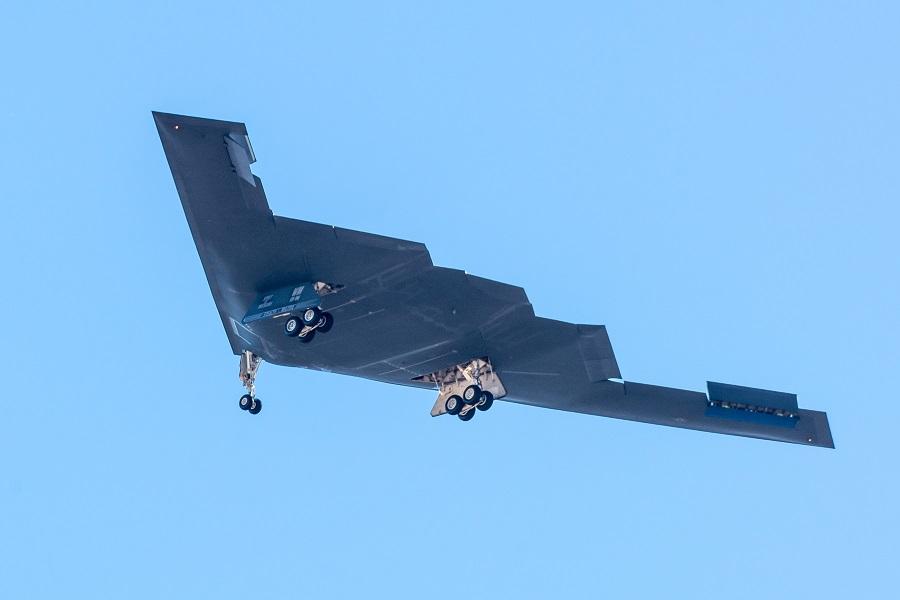 The US Air Force Global Strike Command said this, in a statement:

“There has been an incident at Whiteman AFB. It occurred at approximately 12:30 a.m. on Sept. 14. A U.S. Air Force B-2 Spirit experienced an in-flight malfunction during a routine training mission and was damaged on the runway at Whiteman Air Force Base, Missouri, after an emergency landing.

“There were no personnel injuries and no fire associated with the landing. The incident is under investigation and more information will be provided as it becomes available.” 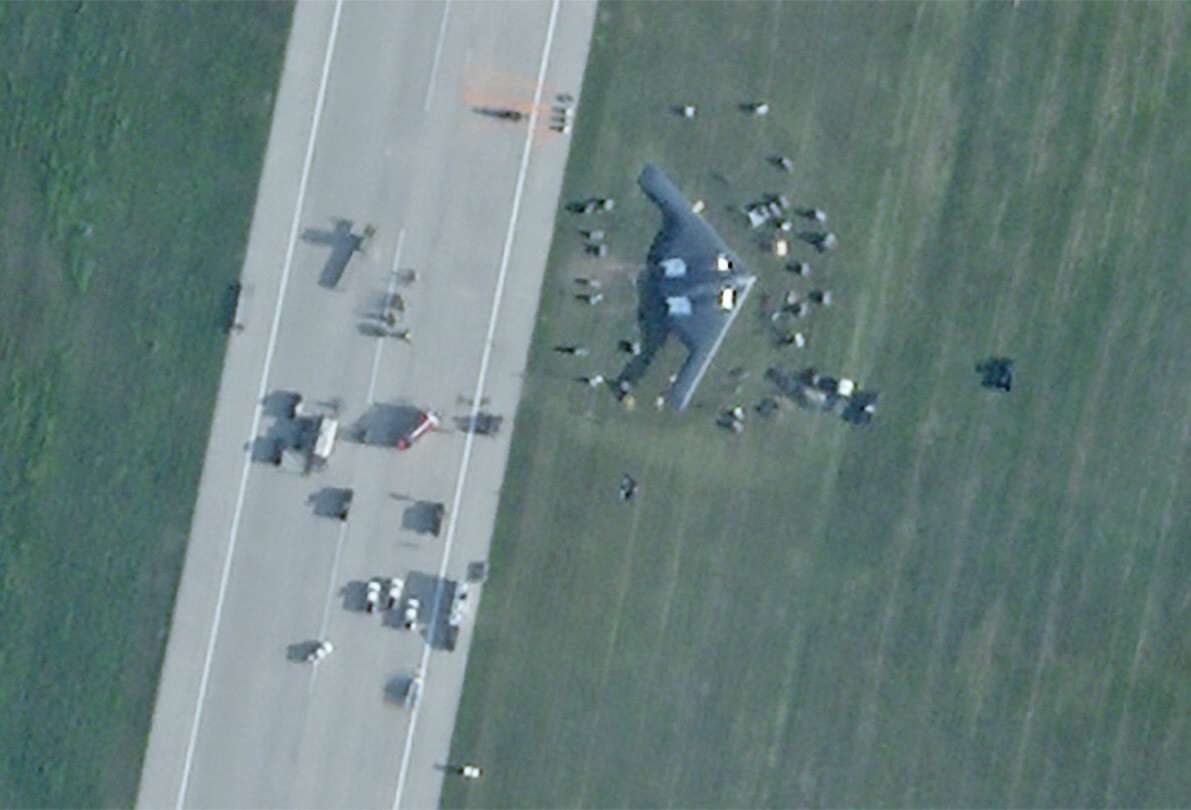 B-2 Bomber Seen From Space

Today, a satellite picture emerged, showing the incident aftermath, when the sun rose over Whiteman AFB. The B-2 bomber appears to have had a runway excursion after landing. The airbase has only one runway (01/19). it is not clear which end of the runway the aircraft landed on. But it appears to have come to rest about 4,000 feet (2,220 metres) from the threshold of runway 01. Alternatively, it’s 8,400 feet (2,560m) from the threshold of runway 19.

We can also see that the left main landing gear of the B-2 bomber appears to have collapsed. However, this could have happened at low speed, as the plane left the runway. The satellite photo shows a number of vehicles and other ground equipment surrounding the aircraft. Military analysts observed that the aircraft’s coating and other systems require specialized personnel because they can release toxic substances, after damage. 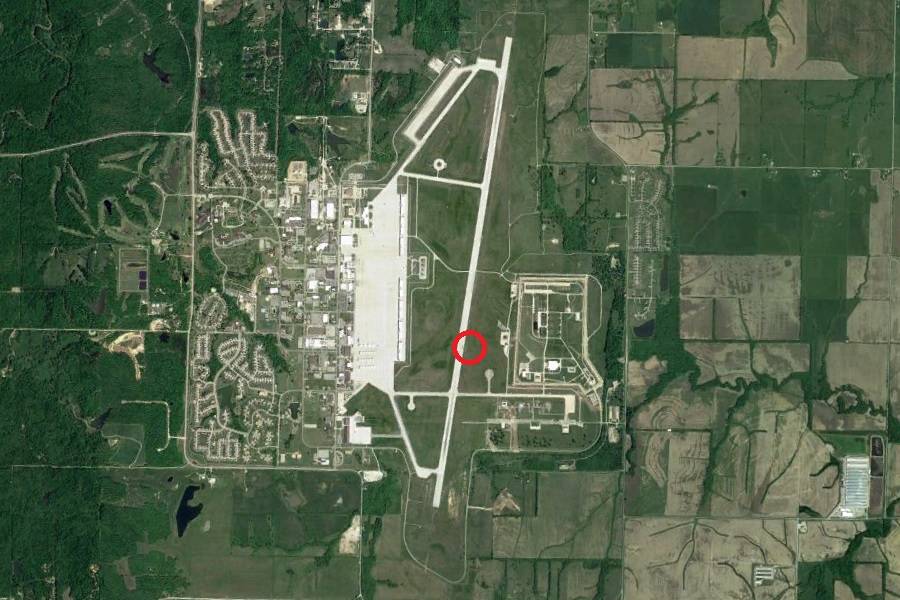 Location of the aircraft at Whiteman AFB

The B-2 Spirit bomber isn’t just one of the most impressive-looking aircraft in the world. It’s also the most expensive. Northrop-Grumman built 21 of these aircraft, of which 20 are still in use. There has been one loss of a B-2, in its service, without casualties. However, it was an avoidable crash, according to the US Air Force.

That accident happened in Guam, in 2008. Before take-off, the B-2 bomber crew got a system message prompting them to make an air data calibration. Maintenance crews performing this action would first turn the pitot heat on, to remove any moisture from the system. However this wasn’t an official procedure, and the pilots were unaware of it. 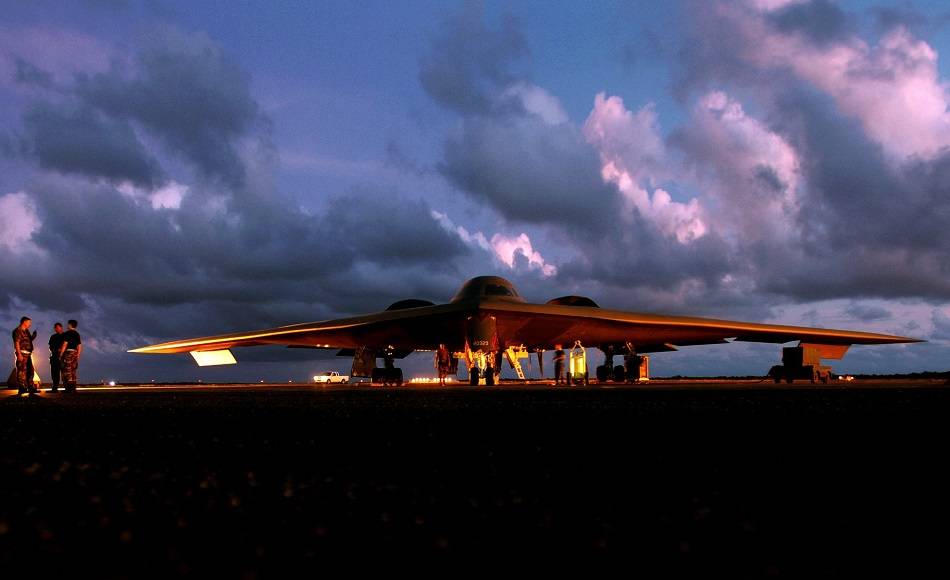 As a result, the recalibration made all three pitot systems behave erratically. With wrong airspeed information, the B-2 crew rotated their bomber at much too low a speed. A wing tip touched the ground, at which point the pilots used their ejection seats. The $1.4 billion aircraft was destroyed in a fireball, but thankfully both pilots escaped without serious injury.

Another B-2 bomber later suffered extensive fire damage. The USAF would have probably scrapped a different type with such damage. But with no possibility to replace these bombers (for now), the USAF chose to repair it, at a very high cost. This will likely be the fate of the aircraft in this latest incident.