The crew of an ASL Airlines Boeing 737-400 freighter faced a difficult landing, unable to trim their aircraft electrically OR manually.

The incident happened earlier this year, in July. But the German Federal Bureau of Aircraft Accident Investigation (BFU) released its interim report in September. It involves ASL flight AG-2382, from Leipzig (EDDP) to Cologne (EDDK) in Germany. This was a short positioning flight, on the 7th of July between the two German airports. 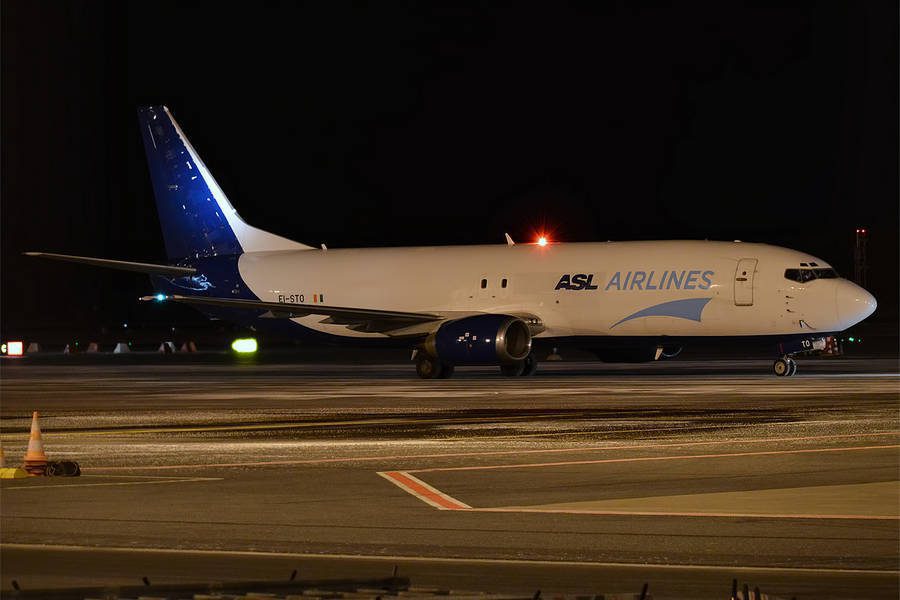 The ASL Airlines crew took off just after 6 pm local, and levelled off their 737-400 at FL280. However, they soon noted that the autopilot could not maintain altitude, entering a shallow descent. So they switched off the autopilot and tried trimming the aircraft. They quickly established that it was impossible to do so, either electrically with the buttons on their yokes, or manually, using the trim wheels.

Checking their indications, the ASL Airlines crew saw that the trim remained at -4.0 units (nose down). The two pilots referred to the relevant checklist, which directed them to use the stabilizer trim cutout switches. Afterwards, the crew chose to continue to their destination under manual flight control. 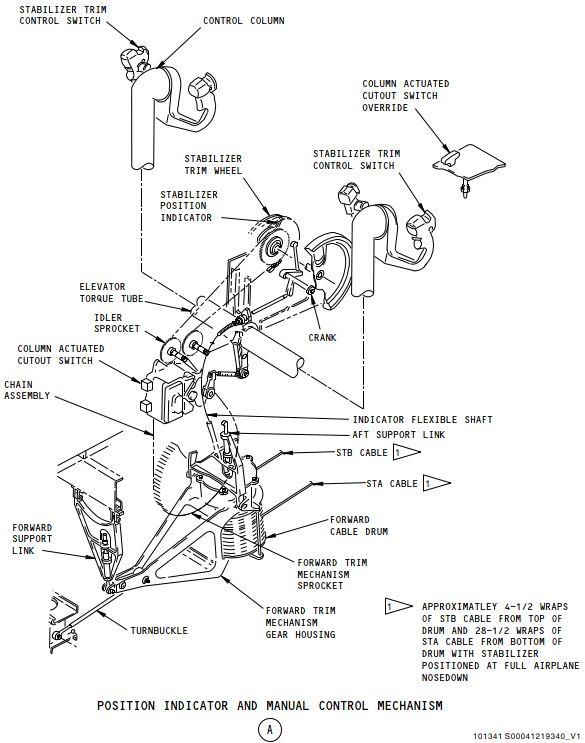 The horizontal stabilizer forward control system of a 737-400. Image: Boeing via BFU

Originally, the First Officer was pilot-flying (PF), with the Captain being pilot-monitoring. However, the out-of-trim condition of the 737-400 meant that the ASL Airlines crew decided to take turns on the controls. They did not declare an emergency, however, as they approached Cologne they informed ATC that they had flight control problems. Also, they requested and got a long (15nm) final.

During the approach, the pilot-flying requested Flaps 1, which wasn’t an issue. But as the plane slowed further and the PF requested Flaps 5, his colleague found that he couldn’t move the lever to that position. The ASL Airlines crew then referred to the Trailing Edge Flaps Up Landing QRH checklist for their 737-400. 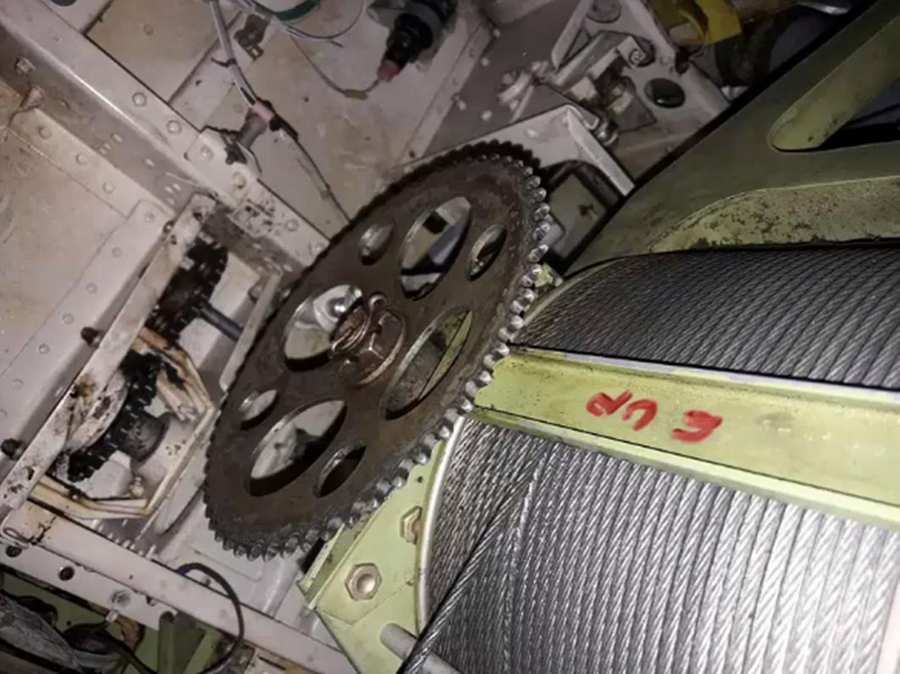 The chain sprockets (three in total) without the chain. Photo: BFU

Both crew members decided on a landing speed of 158 KIAS. They subsequently managed to land without further incident, at 19:23 local time. Then after parking, the crew contacted ASL Airlines maintenance personnel about the issue they had with their 737-400. What maintenance found, was that a chain that would link the cockpit trim controls to the horizontal stabilizer trim system, wasn’t in place!

Crews found the chain and a connector link, loose in the forward equipment compartment. Later, investigators learned that two weeks earlier, ASL Airlines had sent in the 737-400 for scheduled maintenance, to a contracted MRO. This work included checking the structure for cracks. And to do that, it was necessary to disassemble part of the cockpit, including the stabilizer forward control mechanism.

The likely problem cause: the locking chain link and its pins, without locking pins at the ends (left image). Photo: BFU

Crews had performed a series of function checks after this work, which was successful. However, the problem appears to be the securing of the chain-link connection. The report into this ASL Airlines 737-400 incident isn’t final yet. However, it seems likely that the locking devices on the chain connector link were missing or not installed properly. So the pins slipped gradually, eventually coming loose.

However, this interim report isn’t clear on why the crew couldn’t move the flaps lever to the Flaps 5 position. It would be possible for the aircraft to be too out of trim when the flaps went beyond a certain value. But as it stands, the report seems to suggest that the problem was with the flaps lever itself. 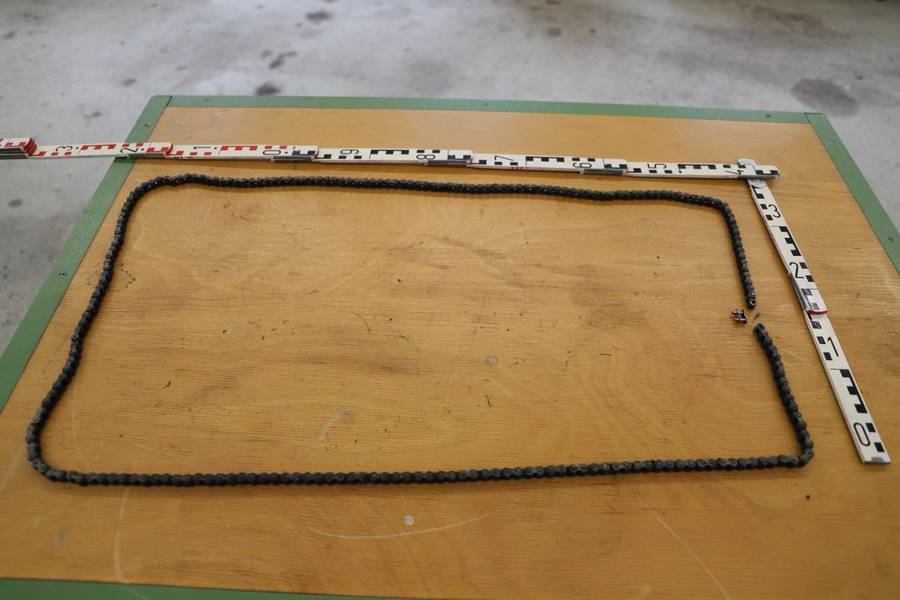 The whole chain and its connecting link (right). Photo: BFU

In any case, the ASL Airlines crew managed to handle their 737-400 successfully. The final report on the incident should be interesting, when it comes.

For the Interim report, go HERE.