I shouldn’t have said anything…

Yesterday was one of those days where you sit down after the flight and think; “I shouldn’t have even mentioned it”.

I was planned to fly a long, four-sector day. The day included a flight from my home base, Girona, to London Stansted and back and, after that, to Bristol and back. All flights were around 2h long and the weather was fine everywhere with just some light turbulence expected over France and some rain showers in the UK.

During the last few weeks I haven’t been line-training anything due to the kidney-stones I had which rendered me with a restriction to fly with only qualified FO’s. This has given me the chance to fly with more experienced colleagues and help them prepare for their coming command upgrade. Yesterday I flew with a first officer with around 1000h and we started discussing how he should be thinking regarding the coming 2 years until it is time for his command Upgrade assessments.

I started off by telling him that First Officers with his amount of experience often fall into a trap where their confidence is much higher than their experience which can render them open to making mistakes. Basically, you can fly for 1000h and gather quite a lot of operational experience without encountering any real difficulties. Since the operation becomes easier and easier the more experience you have, you can get a feeling of “I can handle anything now, I am EXPERIENCED!” without actually having seen anything really difficult. It is very important to be aware of this and constantly watch your own performance critically. It is part of our Threat and Error response technique of ANTICIPATE – RECOGNISE – RECOVER.

I told him ” You have all of this normal operational experience and then all of a sudden you have a medical emergency, or a sudden unexpected re-routing or technical failure and you end up with extreme pressure. This will lead you to evaluate your knowledge contra your experience and get it more in line with reality”. And “My experience  is also, when things start to happen, they all come together, even if they are not related to each-other”… I wish I hadn’t said that. 😆

He laugh and said that he had heard the same thing from another colleague.

The flight to Stansted was uneventful until, at the very last minute, we did indeed get a very unusual re-routing that required a lot more effort than initially briefed. We laugh at it a 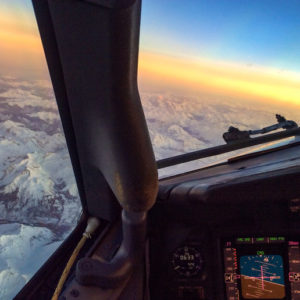 nd I got to say “I told you so” which always makes any trainer happy!

On the second rotation out from Girona to Bristol, we were sitting over France at 36000 feet when suddenly we got a call from our Purser; “I have a PAA (Problem, Actions, Additional information) briefing”. “We have a passenger with difficulties breathing and a num feeling in his arms and hands, we have nurses attending to him but we might have to divert!”. I looked at my First officer and sighed, this was exactly what we had been talking about on the previous leg!

I asked to talk with one of the nurses that was attending to the passenger and she informed me that the passenger was breathing normally, with good pulse and no signs of immediate danger. It would be good if he could be checked up by a doctor on arrival but no need for an immediate diversion or medical attention. I relayed this information to my first officer and we decided that there was no need for a PAN call at this point and that we could continue towards destination as normal. If the situation would deteriorate we could upgrade our status in order to receive ATC priority. Our handling agent was advised, over the radio, and asked to provide medical assistance on arrival. I did a NITS (Nature, Intentions, Time, Special procedure) briefing with my Cabin-Crew to keep them in the loop and proceeded to Bristol where help was waiting.

This was not really a full blown medical emergency but it showed how quickly things can go from a breezy chat in the cockpit to cold reality. During the approach, ATC vectored in a Cessna 3nm ahead of us on Final which forced us to reduce speed to minimum immediately but the Cessna still had to Go-around as we were getting to close.  The turnaround was delayed because of the medical issue with the passenger but we still managed to get away within a reasonable time.

During the return leg, an approach into Girona, we were attacked with green laser from the ground. 😖 This was reported to ATC who contacted the local Police in order to try and catch the person with the laser pointer. Shining a laser at an aircraft is considered an “Attack on aircraft safety” in Spain and most other countries and is punishable with up to 100K Euros in fine and jail-time. Fortunately i only got hit for a split second and my First Officer was pilot flying so we could continue the approach without further incident. Subsequent aircraft, coming in after us, were also attacked.

This meant that I had to finish off my 12h day with writing TWO ASR’s (Air Safety Reports) before I could go home and sleep. Report writing is a VERY important part of our ongoing strive to improve safety in the aviation business because it spreads information and helps the company and authorities prioritise threats and deal with them. Always write a report if something safety-related happens to you!

The reason I wanted to write this blog-post was to show you that things DO happen in this occupation and, for some reason, they all tend to all happen together. It is very important to be vigilant and aware that even the most relaxed of days can quickly become considerably less relaxed, very quickly, and we have to be continuously on our guard. 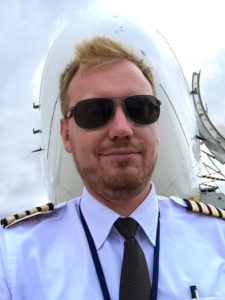