If you’re like many of us, you’ve always wanted to fly. Fly something, anything almost, from a Cessna to an Airbus or even do the whole Top Gun thing with an F/A-18. But alas, unless you had a rich dad, were prepared to live off noodles for six years in a bare attic or won the lottery it was always pretty unlikely. Even if you had the cash, the demand was up and down and far too many young people, having been previously prepared to sell unused or unwanted body parts, were trying to get in the right-hand seat of a tired and dirty 737-400. The best seat most of us to got was 33C on Ryanair from Stansted to Alicante. Kelly McGillis was not on that flight. Up until 1982, that is. The year of the Falklands war, ‘Ebony and Ivory’, the last Laker flight…

Yes, 1982. 37 years ago, Microsoft released the Flight Simulator v1.00 for the IBM PC. Originally designed by Bruce Artwick at subLOGIC Corporation and sold to MS in ’81, the program is now the longest running product line at Bill’s baby and is three years older than Windows. It’s probably the longest-running PC game series of all time. These days it looks laughably primitive with its CGA graphics and engine noise like a demented house fly or the bass line on one of Duran Duran’s less popular tunes. Of course, you’d need a Commodore to run it.

So, if you could find your way (quickly) around a keyboard (no joysticks back then) you could pretend to be the Red Baron, Amelia Earhart, Captain Chaos or even, yes, Maverick.

After numerous iterations, culminating in the 2006 FSX, MS called it a day. Three years later they shut down further development and sold the code to Lockheed Martin who released Prepar3D in 2010 at $499. (later reduced to $199, but still a hefty chunk of change) In 2014 Dovetail Games bought the rights to FSX and repackaged the program as a Steam edition. The least said about MS Flight, the better. Real enthusiasts moved over to X-Plane, but many people flew on with FSX.

Full re-heat on to June 2019 when MS announced a brand spanking new flight simulator for release in 2020 as part of the E3 conference and they demonstrated the development to the date on an Xbox YouTube channel. The videos are jaw-dropping. Aside from the astonishing renditions of town and country, sea, sun and sky, there’s all manner of night lighting, various kinds of traffic and even a tower (yes, really) of giraffe walking the savannah, if that’s what starts your engines.

MS will be providing 2 petabytes (that’s two million gigabytes) to provide scenery and using Azure artificial intelligence to perform all sorts of wizardry within the program. I don’t use the word ‘awesome’ easily, but it really is. As much as has been released so far, a few of the main features are; 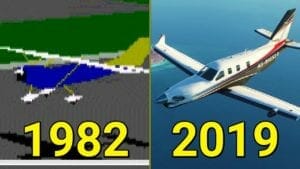 VFR for the entire world. If you want to fly over Table Mountain, the Forbidden City or your sister’s place at no. 19, you can; in very-close-to-photorealistic fidelity. Your sister’s place is there. Runways at Courchevel and Lukla are accurately sloped.

All variations of clouds are modelled in 3D volumetric glory. Up to 32 layers of them. Light from the city bounces around them at night and they cast the correct shadows on the ground and on themselves. Rain is volumetric too. There are rainbows. There will be windshear and ridge lift and up/down draft in cumulonimbus and real weather and all manner of other things at which to goggle.

A large criticism of FS from the purists has been the aerodynamic performance of aircraft, too often flying as if ‘on rails’. The modelling has been completely re-designed. Forces acting on every surface of the aircraft have infinitely more realistic effects; for example more turbulence on (say) the left wing only will have the appropriate effect on the rest of the aircraft. That said, we can look forward to stalls that behave like real stalls, spins that properly spin and so forth. (Note to self; learn recovery procedures)

There’s a multitude of other features, some in minute detail; the relationship between oil viscosity and temperature is modelled. The amounts of static and dynamic friction between tyres and runway vary according to the surface, be it grass, concrete, or tarmac.

Microsoft haven’t announced prices yet, nor specs on what kind of hardware you’ll need. Neither have they announced if VR will be supported, at least in the first release. It’s not yet clear whether the new FS will be subscription-based or an outright purchase; a purchase seem more likely at this stage The quality of the cloud-based scenery will be dependent on bandwidth, (although you will be able to cache your favourite scenery) since you won’t have 2PB just lying around.

And for other simulators? Many fans of X-Plane and Prepar3D are highly brand loyal, and they will remain there. Also, those who’ve invested tons of cash in third party scenery, traffic, and aircraft will naturally be cautious. Fans will continue to use FS9 and FSX, especially if their hardware or broadband makes running FS 2020 a frustrating experience.

What Microsoft have said is that FS will be available for PC and Xbox, so given the limits of the console, you might need a better machine, but equally you might not need to re-mortgage the house.

So save that end-of-year bonus (he laughed) and hold on. You don’t really need new tyres, now do you?