De Havilland Comet – The Father Of All Modern Jetliners?

The de Havilland Comet revolutionized modern airliner design, introducing many innovations. Alas, its troubled history shortened its career. But it taught the industry many lessons, that shaped future airliners.

It is very difficult for us to comprehend today what it meant for de Havilland and Britain in general, when the Comet flew in 1949. The country was recovering from WWII, still facing considerable financial difficulties. Britain also had a more pressing, aviation-related issue. While British companies had designed several successful aircraft designs in the war, few were suitable for post-war use as airliners. And even those that were, had limited development potential. 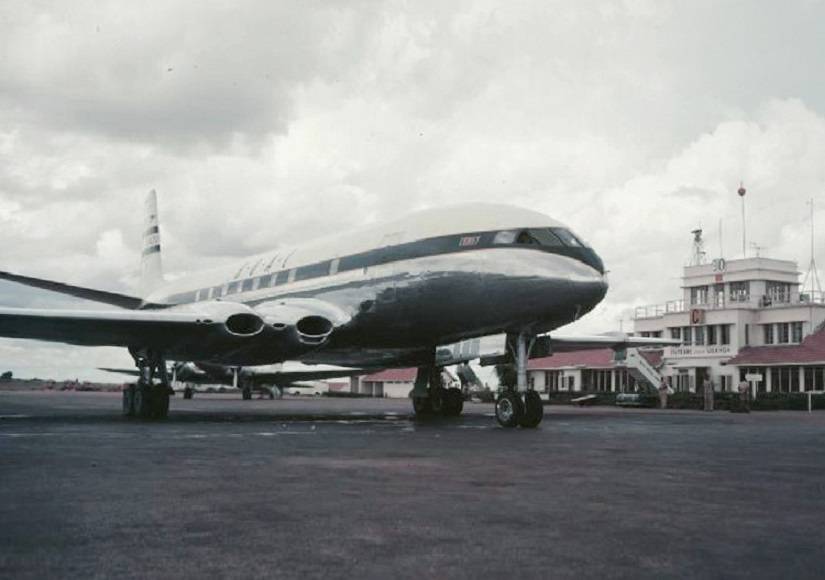 Boeing in the US had the all-aluminium construction, pressurized B-29. British aircraft makers had no shortage of experience working with metal aircraft. But even during the war, they realized that they needed to begin planning the next day for the industry. So the process that would eventually lead to the de Havilland Comet, began in 1943. The aircraft was the most ambitious of a series of designs up for consideration at the time.

Also, jet engines in 1943 were very much a novelty. The idea of designing something for such a large aircraft had occurred to many… but nobody had one. De Havilland would eventually fund their own engine (!) for the Comet, acquiring an engine company (Halford’s) in the process. However even before the initial version of the Comet entered production, de Havilland aimed to use the Rolls-Royce Avon. This turbojet would eventually see use in later versions of the airliner. 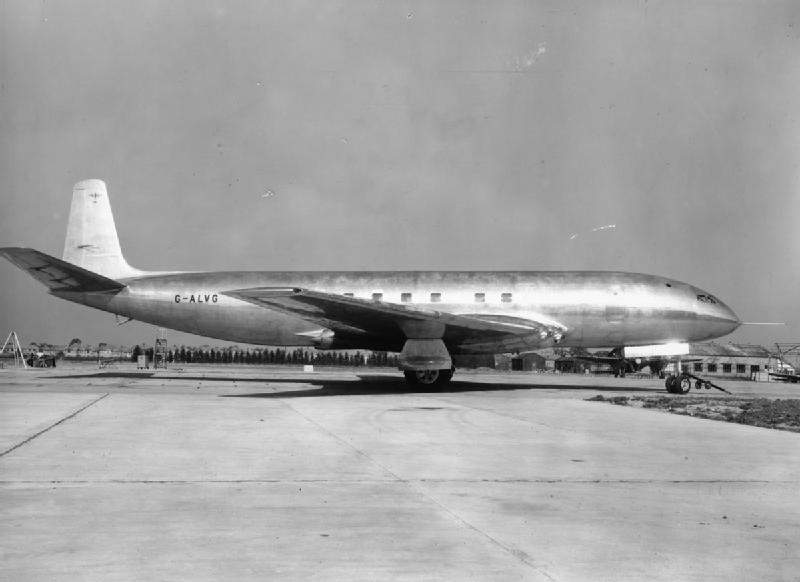 Comet prototype, with giant main gear wheels, instead of bogies

In addition to a pressurized cabin and jet engines, the aircraft also had ‘boosted’ or powered flight controls. These were not new. Aircraft like the Lockheed P-38 fighter also had power-assisted controls. But the de Havilland Comet was the biggest (and fastest) aircraft to have such a system. And initially, the manufacturer did not incorporate any kind of ‘feedback’, for the aerodynamic forces on the controls. This made it relatively easy for pilots to overstress the aircraft.

It was this aspect of its controls that probably contributed to the de Havilland Comet’s first accident. At the time most people saw it as pilot error. More incidents eventually made the problem more apparent. But the biggest problem of the Comet 1 was the lack of understanding on metal fatigue and the effects of compression. 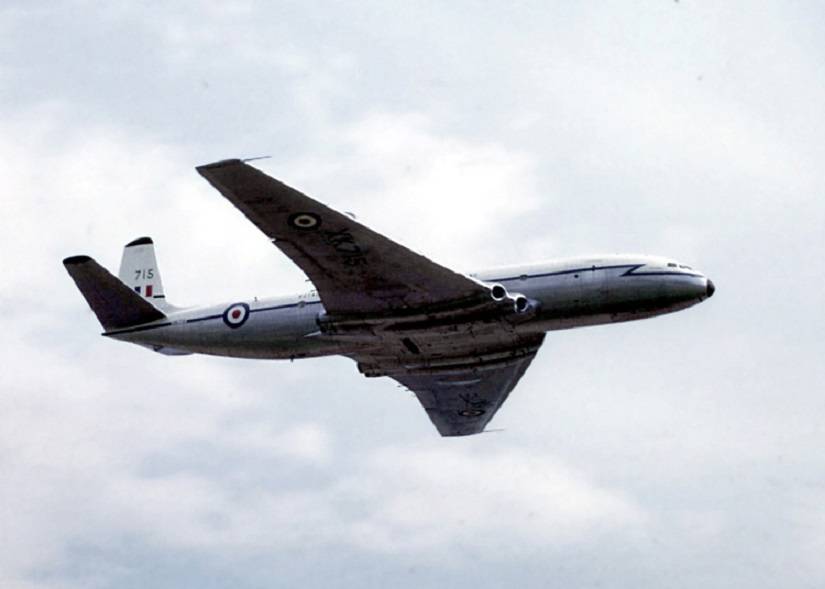 There is extensive literature on the subject. But in short, the company had to redesign the aircraft after the lessons of two major, fatal crashes. The shape of the windows changed to a more rounded profile. But de Havilland incorporated many more structural changes in newer Comet versions. They also came up with ways to study fatigue and examine parts for signs of stress. These lessons were released to the public, and so were a valuable resource for newer airliner designs.

After several developmental versions, de Havilland introduced the Comet 4. In addition to structural changes (including the rounded windows), the aircraft had several other innovations, that are worth exploring. The Comet 4 was longer and finally had its Rolls-Royce Avon engines. These required bigger engine intakes. Along the way, the aircraft also had a weather radar. This was necessary, given the speeds and altitude changes the aircraft’s operation involved. 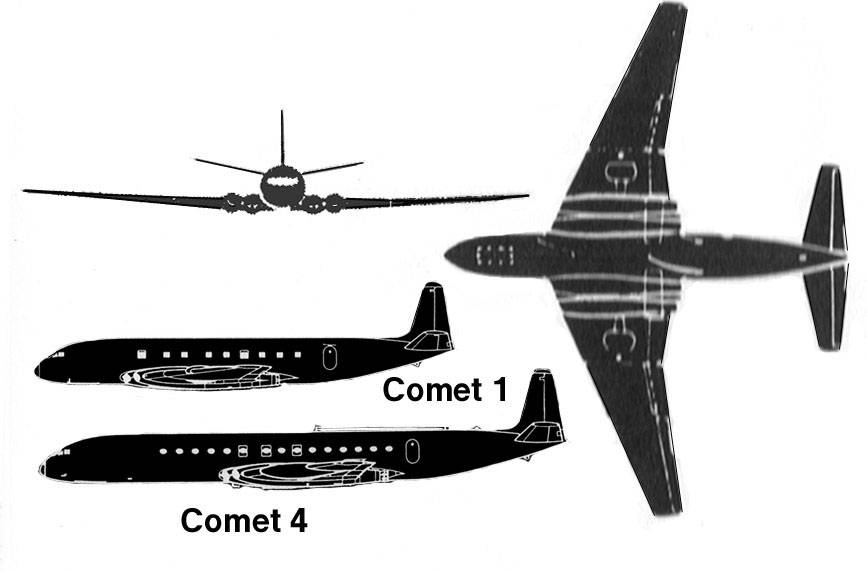 Another innovation that comes from the de Havilland Comet, is the four-wheel bogie main gear legs. We don’t see them in many single-aisle jets today, but few (if any) widebodies lack them, or six-wheeled versions. The Comet 1 already had them, except for the first prototypes. The position of the landing gear was interesting. It was some way out, onto the wing, and they retracted further outwards. And this was because of those unique engines.

There is an undeniable elegance in the ‘buried’ engines of the de Havilland Comet. It’s a much more streamlined look, than the ‘podded’ engines we now know. The position had several advantages. There was little change in pitch with power changes, because the engines are not below the fuselage. The engines are also closer to the fuselage laterally, requiring a smaller rudder and vertical stabilizer, in engine-out scenarios. Finally, the design has less drag than podded engines. 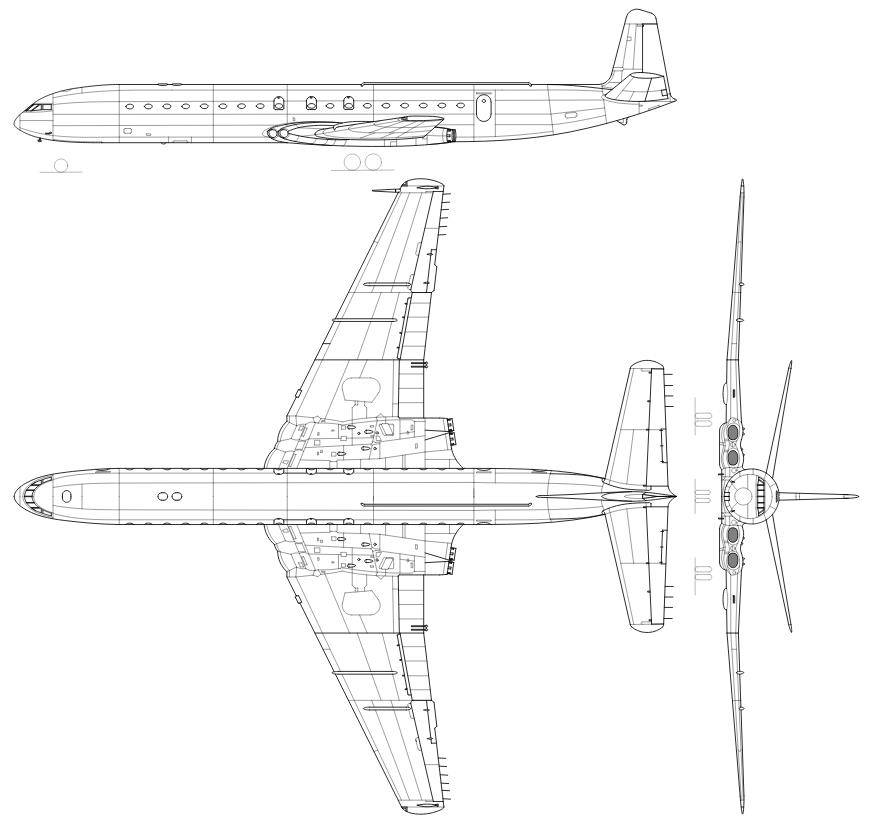 de Havilland Comet 4B Image by Kaboldy via Wikimedia – license

Unfortunately this is where the advantages of the buried engines end. Servicing the engines was tricky. De Havilland made sure to add as many inspection panels as possible to the Comet’s wings. So at the time this wasn’t considered an issue. The main problem was the design’s complexity. The structure of most (all?) wings calls for one or more spars. These are essentially beams, running from the fuselage to the wingtips. Normally, they have an unobstructed run along the wing’s length. 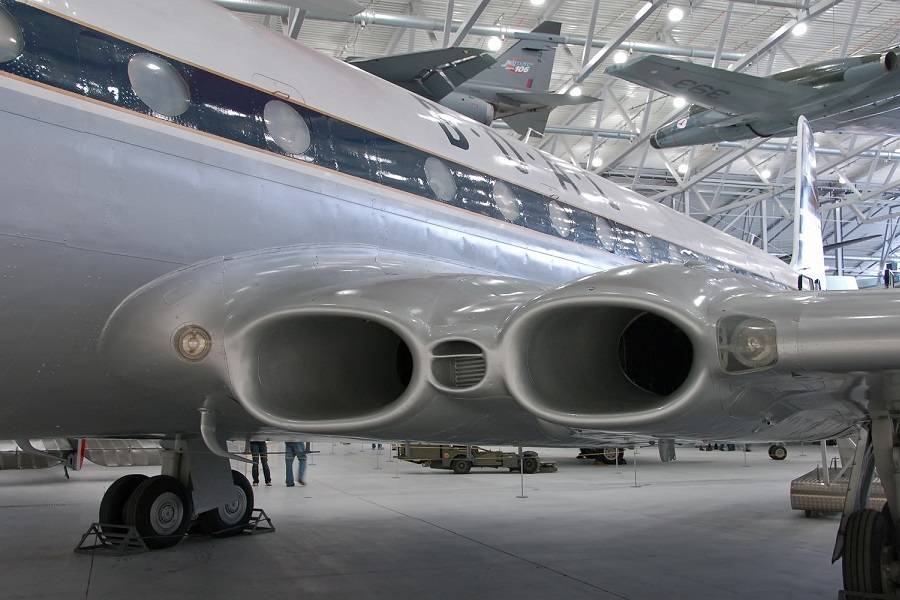 But in the Comet, de Havilland had to integrate the engines through the wing spars. The solution? More weight. The structure around the cylindrical engines has to be strong enough, while accommodating the engines’ size. Soundproofing was another requirement, although this had more to do with the engines themselves. The outboard landing gear also added weight away from the centerline.

On the engineering side, de Havilland had built a lot of systems redundancy in its Comet. It had a total of four hydraulic systems, and additional backups for critical systems. The aircraft could still power all systems even with only one working engine. The aircraft’s layout and systems had such a positive reception that Sud Aviation in France licensed most of them. 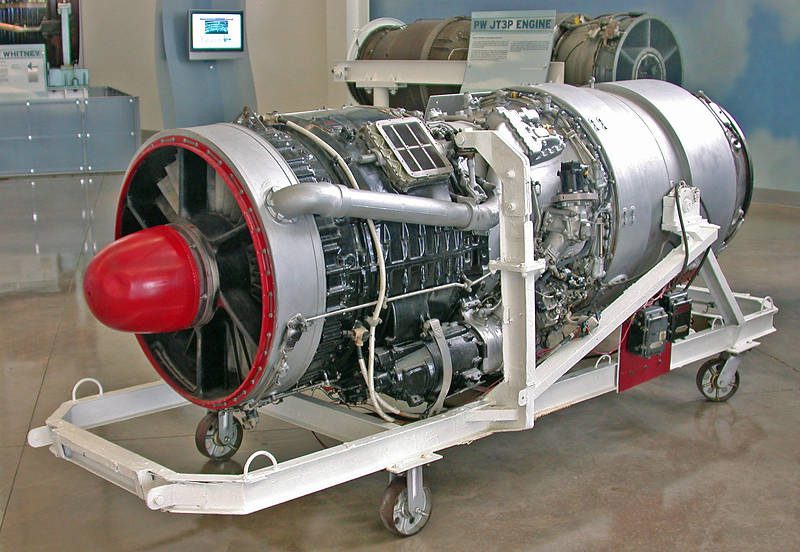 A lesser known aspect of production Comet 1s was that they had provisions for rocket-assisted take-offs! De Havilland actually designed such rockets, but few airlines tried them in their Comets. Later Comet 4s were more powerful, making such rockets unnecessary. Unfortunately, another downside of all versions, was the access to the cargo holds. They were directly under the fuselage, meaning that a baggage handler had to lift each suitcase vertically, up into them!

We recently did an article on airliner designs that got a second life in the military. It mainly focused on current-production aircraft, with a couple of honorary exceptions: the DC-3 and the 707. No, the latter is not older than the KC-135, but… it’s complicated. Regardless, a reader pointed out that we missed another former civil airliner, with a long and distinguished military career. This is of course the De Havilland Comet, in its rebirth as the Hawker Siddeley Nimrod. 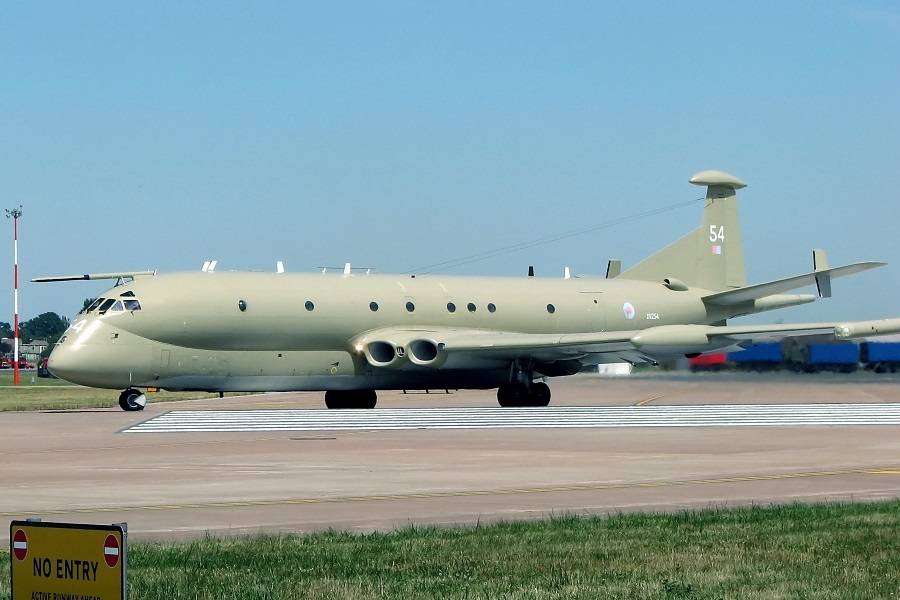 Hawker Siddeley was the successor to de Havilland and other companies, after a consolidation. And the Nimrod is basically a De Havilland Comet on steroids… on all counts. The engines are now four Rolls-Royce Spey turbofans. The nose has a maritime radar, and the aircraft has multiple other sensors for its new role. It also has a bomb bay door in its fuselage. The cockpit and other systems went through a complete transformation – only the yokes stayed the same.

The aircraft entered service in 1969, twenty years after the de Havilland Comet. The first two prototypes actually were Comets, that had no buyers. The passenger jet continued in service for some time after. So all subsequent Nimrods were new aircraft. They primarily had a maritime role, but other versions had other careers. The RAF retired the last of them in 2011, but not before considering a re-engined update – whose prototype flew! The type’s replacement was a more modern (?) platform: the 737NG, as the P-8 Poseidon. 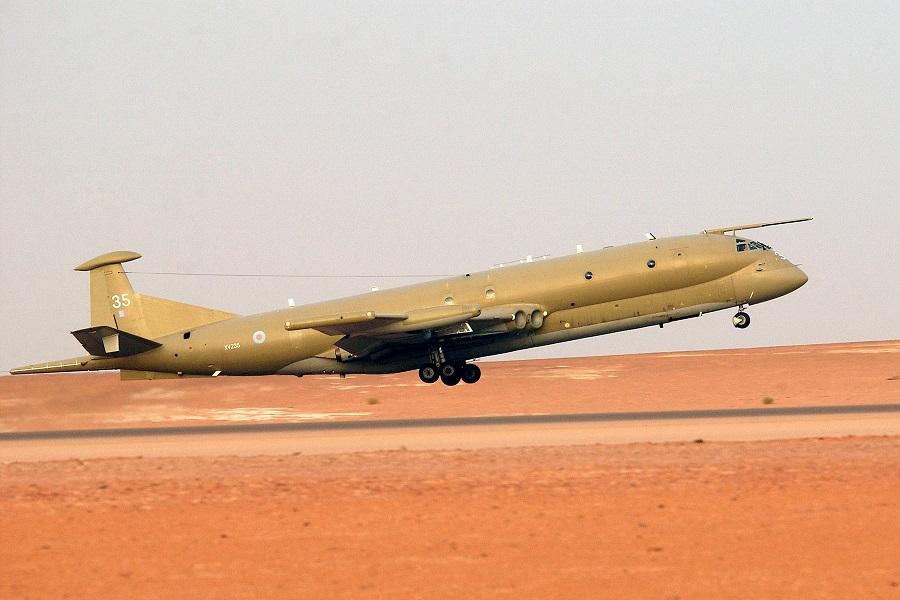 A Vital Chapter In Commercial Aviation

The de Havilland Comet didn’t go down in history as a successful aircraft. And this is a shame. Many airliners that came after it, owe part of their success to its development. A lot of its mistakes were unknowns for everyone. In modern terms, de Havilland was simply ‘the early adopter’, that ‘debugged’ commercial aviation, with its revolutionary design. The Comet’s failures meant that those who came after it, succeeded.