Cold Weather Testing – Why Do They Do It (and where)?

Boeing’s 777X and COMAC’s C919 are undergoing different types of cold weather testing. This is part of the certification process for both aircraft.

Aircraft manufacturers have to keep a lot of people happy, when they certify an aircraft. By design, commercial aircraft are more reliable than your car. Things do go wrong in them, but redundancy means that crews must always have a way of getting the aircraft and everyone in it, home. They also need to know that the aircraft will be just as safe in all possible conditions. And this is where cold weather testing comes in.

Of course all aircraft experience harsh temperatures in regular service. At the altitudes they fly, jets routinely operate in temperatures intolerable to humans. But that doesn’t constitute cold weather testing. No, this testing is primarily about what happens when the plane is shut down in the cold. But even that isn’t really the whole story.

The 777X and the C919 are both in testing, but not in the same phase. Boeing now aims to certify the 777X and deliver it to the launch customer (Emirates) by 2023. COMAC, on the other hand, wants to finish the certification of the C919 within 2021. So actually they are much further along in testing than Boeing. The C919 has already finished its first round of cold weather testing. It began last December in Inner Mongolia, ending in January this year.

The aim of cold weather testing is to see how the aircraft handles extremely low temperatures. Things that work fine in other parts of the world, need to prove their suitability to these conditions. Hydraulic and other fluids, filters, fuel lines, batteries, cable insulation, gaskets and other plastics, all must undergo testing.

The Complications Of Cold Weather Testing

But of course it’s a bit more complicated than this. After all, engineers can test parts in cold conditions in a lab! They can see what the parts will do in the cold in controlled, repeatable conditions that way. So why transporting a plane and a few dozen people to Mongolia or Alaska, to do cold weather testing there?

The answer is because parts cool differently when assembled into an actual machine – in this case an aircraft. Different metals cool at different rates. Plastics that would cool slowly, will cool faster if they’re in contact with a more conductive metal. Large assemblies and mechanisms can’t always undergo testing in a lab, with correct conditions for each part. Cold weather testing shows engineers all of these issues, plus anything that they couldn’t imagine.

Also, new materials call for more tests. The 777X has an all-composite wing. Even conventional designs like the C919 could have unusual components, with unpredictable properties. And as we already mentioned, these tests come in stages. Boeing’s 777X is at an earlier stage. But as an evolution of an existing design, perhaps its testing will get on a bit faster.

Boeing will put its 777X through the rigors of cold weather testing in Alaska. At this stage, they will verify that all of the aircraft’s systems behave in predictable and expected ways, in cold conditions. As part of this test, mechanics and pilots will shut down the aircraft for 24 hours, letting all of its parts cool off. Then after re-checking its systems, they will see that the APU and both engines can start normally. Thrust reversers and other key systems will be checked in the ice and snow. 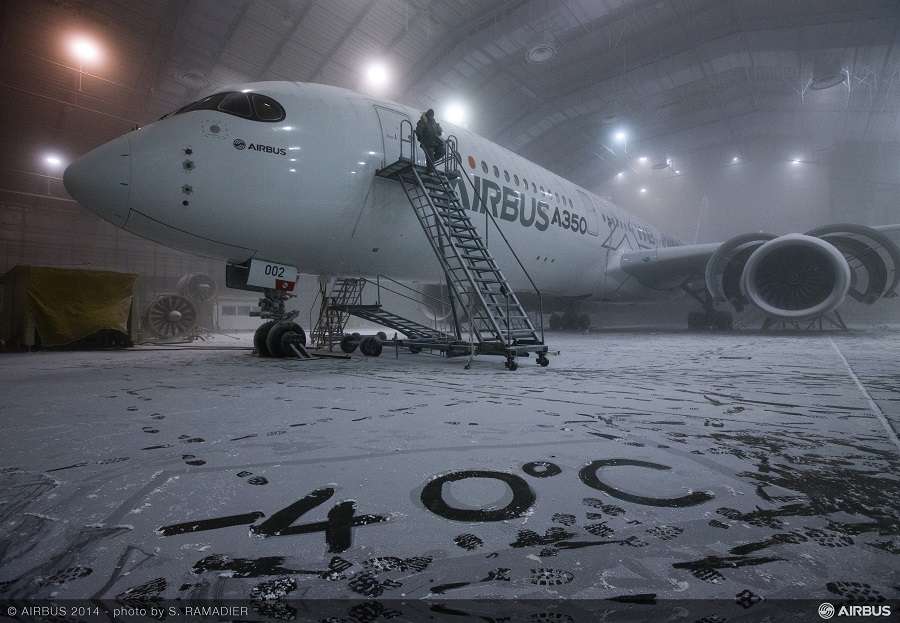 Sometimes you can do these tests indoors..!

That last bit of testing, in ice and snow, is closer to the kind of cold weather testing that COMAC’s C919 will face in its testing. This will take place not in Mongolia, but in Canada. Specifically, at the installations of the International Test Pilots School ITPS in London, Ontario. This time, the aircraft will undergo natural icing testing. This actually involves less extreme temperatures than the C919 faced before. The engineers will deal with around -10°C there, as opposed to -35°C in Mongolia.

This round of testing examines how well the aircraft copes from formations of ice in the cold weather. So it’s more about the different conditions, rather than the strength or brittleness of various materials. Engineers must confirm that the aircraft can shed formed ice successfully. They also need to see how the aircraft’s performance is affected, in various icy conditions. 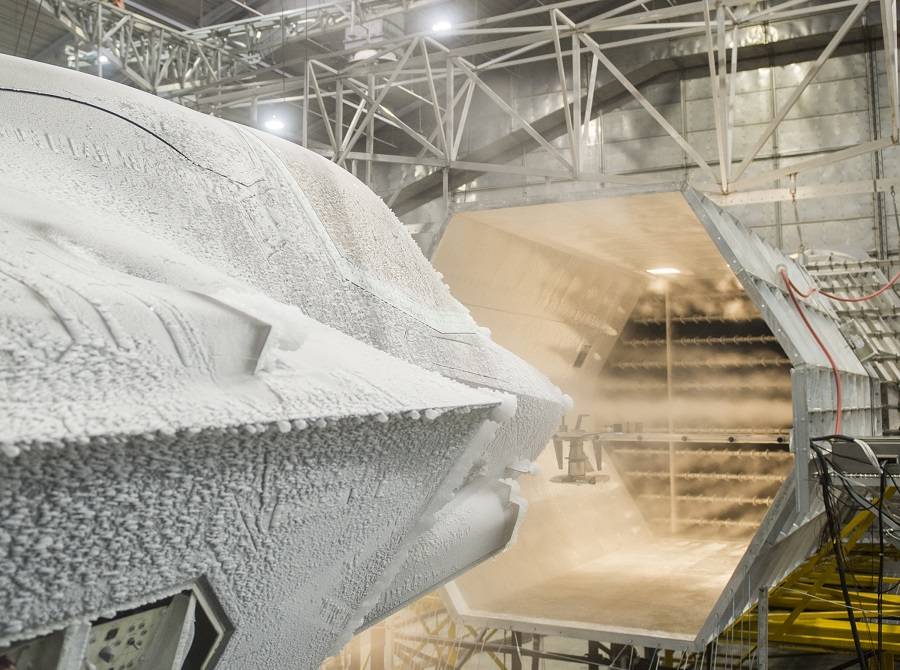 Smaller jets are easier. This is an F-35B undergoing icing cloud testing!

The size of these aircraft means that traveling to cold places for cold weather testing is inevitable. Or is it? The US military actually has a very nifty testing site for such tests. And it’s not in Alaska. It’s in sunny Florida! The McKinley Climatic Lab is pretty huge. It has spaces big enough to house a B-52 bomber. Or an Airbus A350, for that matter. Yes, the facility is happy to offer its services to customers. For a price of course.

But it is cheaper for manufacturers to conduct multi-day testing somewhere where it’s just cold. That’s why we will keep seeing shiny new airliners doing weather testing in very cold places. Certainly much more often than in USAF’s frozen hangars!