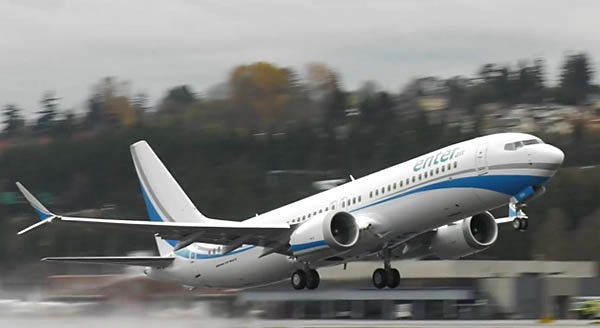 Good news came this week, as US Manufacturer Boeing announced an order for up to four Boeing 737 jets by Polish airline Enter Air, marking the first order of the type for over a year. But alongside the order, came a subtle rebranding of the MAX Fleet of aircraft.

Boeing and Enter Air announced the Polish airline is expanding its commitment to the 737 family with a new order for two 737-MAX8 airplanes plus options for two more jets.

“Despite the current crisis, it is important to think about the future. To that end, we have agreed to order additional 737-8 aircraft.” “Following the rigorous checks that the 737 MAX is undergoing, I am convinced it will be the best aircraft in the world for many years to come,”

Said Grzegorz Polaniecki, general director and board member, Enter Air. The airline has confirmed it is ordering Boeing 737 MAX 8 aircraft, but these planes are being described as Boeing 737-8 aircraft.

The first signs of the Boeing 737 MAX being rebranded came over a year ago, with Enter Air’s order just being the latest in a series of hints. At the time IAG (the parent company of Aer Lingus, British Airways, Iberia, and Vueling) signed a letter of intent for up to 200 Boeing 737 MAXs, and the IAG referred to these planes as the as the 737-8 and 737-10.

Additionally, a Ryanair 737 MAX aircraft was captured parked on stand at Boeing’s Factory in July 2019 branded as the 737-8200 on the side, mimicking a similar style to the existing 737-800 aircraft operated by the carrier.

So what are your thoughts on the rebranding? Would you feel comfortable flying onboard the 737-MAX rebranded or not? Let us know below!