An Omni Air Boeing 767 crew rejected their takeoff, then had a landing gear fire and evacuation, because the Captain’s window was open.

The incident happened on the 15th of August in 2019, and the final report came out yesterday. It involved Omni Air International flight OY-531. This would take its passengers from Shannon Airport (EINN) in Ireland to Kuwait International (OKBK), in Kuwait. Shannon was actually a stopover for the flight, which originated in Oklahoma’s Will Rogers World Airport (KOKC), in the US. 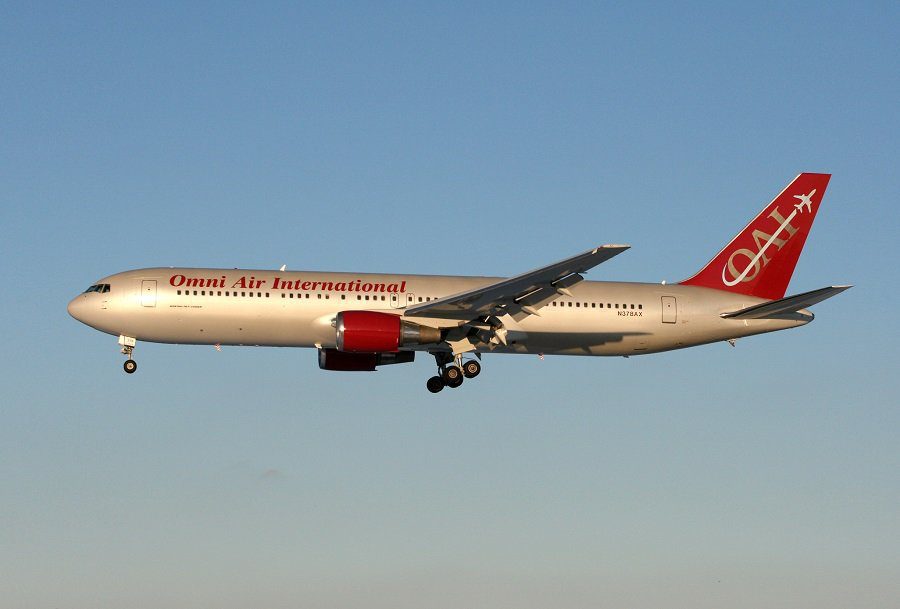 The crew started their takeoff roll on runway 24 in Shannon. Unaware that his window was open, the Captain, who was pilot-monitoring, noted a loud noise coming from his left. The noise gradually increased. Worried that communication with his First Officer would become impossible, the Captain took over and rejected the takeoff.

The First Officer also heard the noise and thought that a window might be open. This was likely because the same FO had been in a previous flight where this had happened. However, when the FO said “Window OK?” during the takeoff, the noise was already too high for the Captain to hear. And crucially, the First Officer thought the crew rejected their takeoff at around 120 knots. The Captain thought they rejected their takeoff at approximately 100 knots. 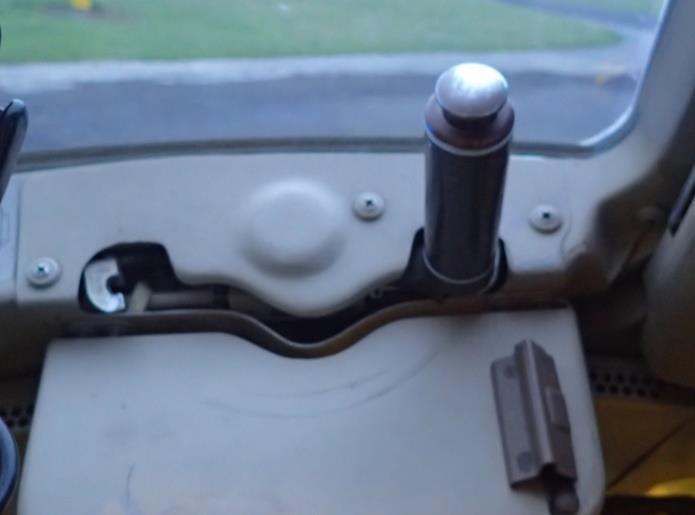 The latch handle of the Captain’s window. Photo: AAIU

It would later transpire that the 767 was travelling at around 149 kts when the crew rejected due to the open window. V1 (decision speed) for this flight was 146 kts. And after the decision to reject the takeoff, the plane accelerated to 160 kts, before beginning to decelerate. But crucially, the crew’s underestimation of their speed meant that they would taxi their 767 after this event. This aircraft did not have wheel brake temperature sensors.

After initially stopping on the runway, the crew notified ATC of their rejected takeoff and that they wouldn’t need assistance. The crew then briefly discussed the open window. And at the same time, the Captain made his calculations on the necessary cooling time for the brakes. For this, he used 120 kts as the RTO speed. He thought this was a conservative figure, given his impression that their actual speed was closer to 100 knots. 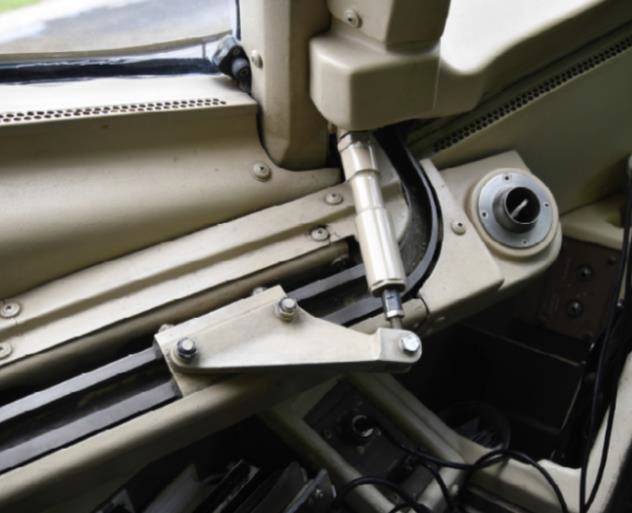 This calculated time was 44 minutes. There was a third crew member in the cockpit, who apparently checked the open window, remarking: “it said locked!” The crew asked ATC for a suitable place to taxi to, while they waited for the brakes to cool. ATC gave them a position to go to, that was at least 2.5 km (1.55 miles) away.

On the way there, the pilots informed first the cabin crew, then their company of the open window incident and the rejected takeoff. The airline asked them to bring the aircraft back to the gate, for an inspection of their wheels and brakes. And given the layout in Shannon airport, this meant even more taxiing, including down runway 24.

The window mechanism has an indicator, to show if it’s locked. Photo: AAIU

Most of this taxiing involved left turns. On the CVR, the Captain is heard commenting that the plane was “pulling to the left”. The crew discussed a rumbling noise and suspected either a dragging brake or a flat tyre. A dragging brake can be an effect of high temperatures. Later, an examination of the FDR showed no evidence of brake dragging.

Approximately 28 minutes after their open window caused the rejected takeoff, the crew got a message from AMC (Air Movements Controller) that smoke was emanating from their left main landing gear, while they taxied on runway 24. CCTV footage of this also shows that the front two tyres on that gear leg were deflated. The crew requested a fire truck. 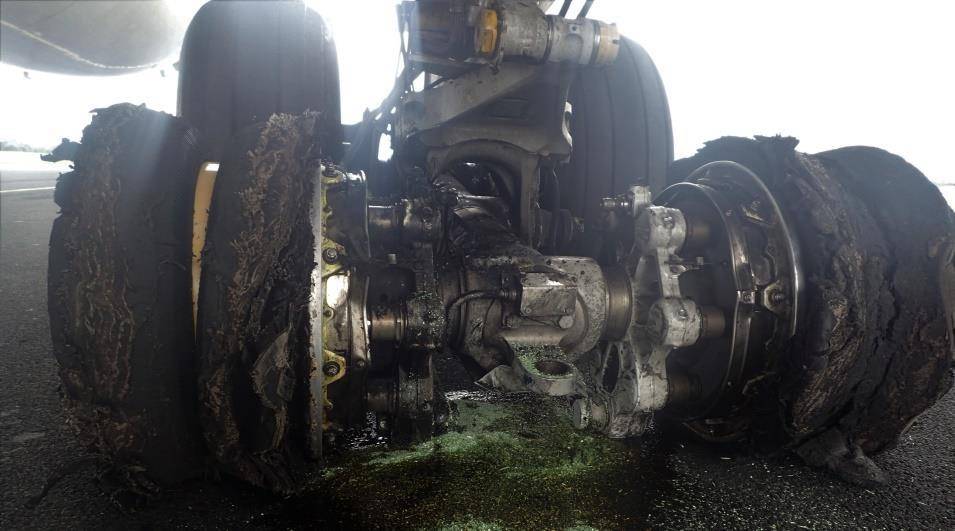 But two minutes later, the AMC radioed again. They told the crew that their left main gear was on fire. AMC suggested that the crew evacuate the aircraft, on the right side only. About three minutes later, Airport Fire & Rescue Service personnel informed AMC that the fire was out. All passengers and cabin crew were away from the plane. The flight crew then radioed that they were the only ones on board, and about to leave. One passenger suffered minor injuries during the evacuation.

Checking that the windows are locked, is an item in the crew’s checklists. But an open window is typically not a reason to reject a takeoff, according to the 767’s training manual. However, the same paragraph notes that noise from such an occurrence can interfere with communications. And the manual says that the flight’s commander should reject a takeoff between 80 kts and V1 if “the airplane is unsafe or unable to fly”. 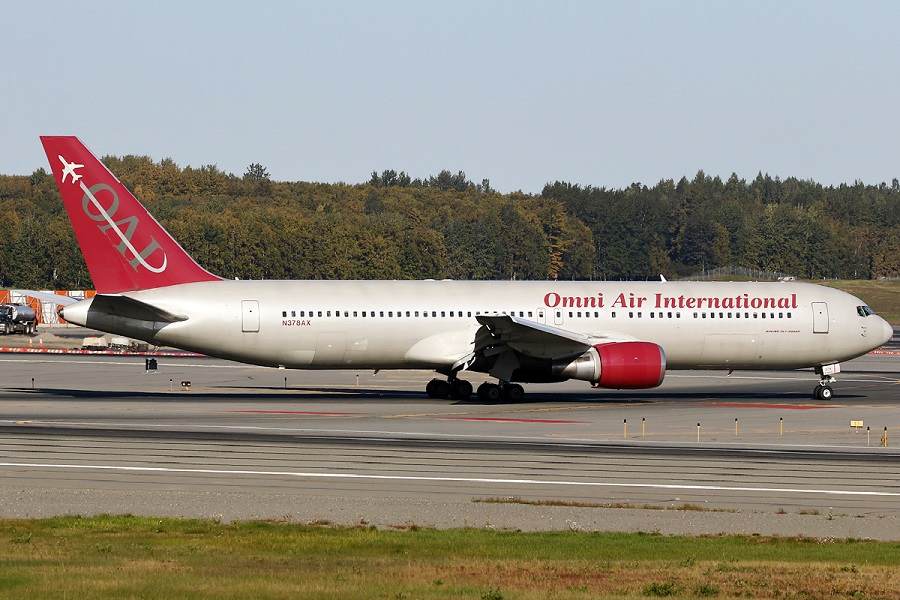 The investigation determined that the noise from the open window was a substantial distraction to both flight crew. This explains their underestimation of their speed during the rejected takeoff. A Brake Cooling Schedule calculation with the correct speed may have been in the CAUTION zone. The crew would have been much more cautious, as a result.

The investigation did not make any safety recommendations.