A Condor Airbus A320 has been sitting idle at a Greek airport since July. And now an interim report shows how seriously damaged it really is.

The initial report on this event didn’t really suggest that it was an accident. It happened on the 11th of July this year, involving Condor flight DE-1763. This was a flight from Greece’s Kavala International Airport (LGKV), to Düsseldorf Airport (EDDL) in Germany. The flight took off from runway 23, with 74 passengers and 6 crew. 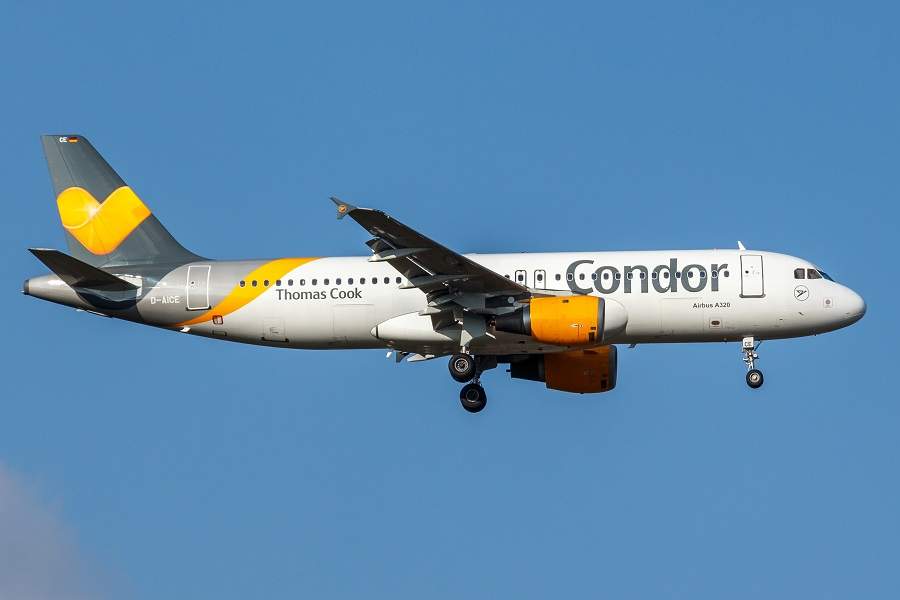 But it didn’t get very far. The crew of the Condor A320 stopped their climb at FL100, realizing that they couldn’t retract the landing gear. The aircraft eventually landed back in Kavala, about 50 minutes after departure. And very soon, an examination revealed that there was damage to the aircraft’s nose gear. The pilots noted a lack of damping from the front landing gear, which was noticeable during touchdown and taxi. But there was more damage to the fuselage itself.

It quickly became clear that there was more to this story. And it relates to something that happened the day before this occurrence, at a different Greek Airport. Initially, that other event was described as a low-speed aborted take-off, at Heraklion International Airport (LGIR). The Condor A320 aircraft then remained in Heraklion for 22 hours, before flying to Düsseldorf. Afterwards, it flew to Kavala, where it got stuck with its landing gear issue. 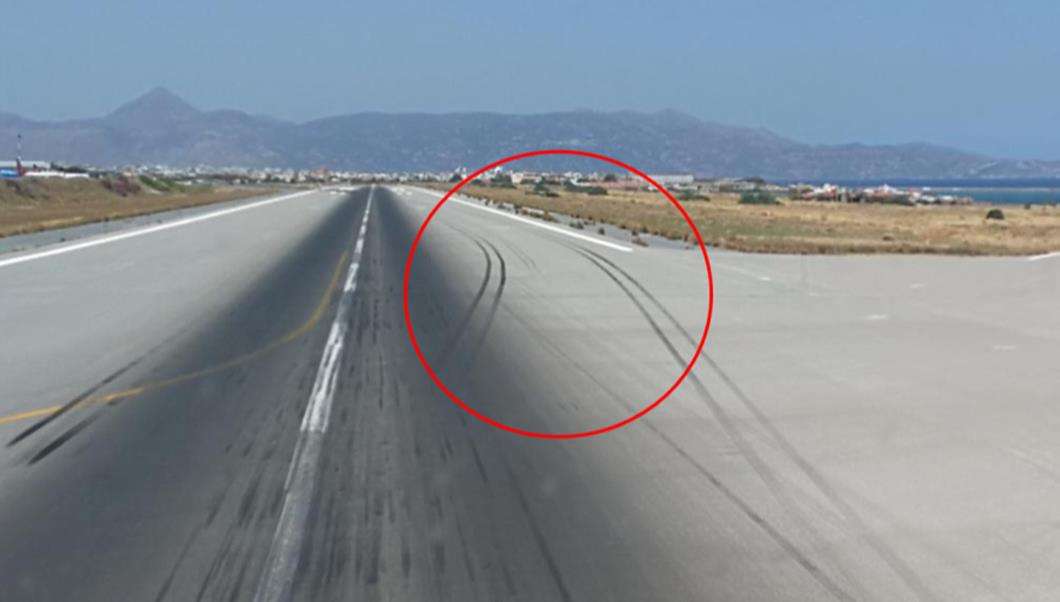 The tyre marks as the plane deviated to the right. Photo: Condor via BFU

The Condor A320 At Heraklion

It’s now clear that the rejected take-off of the Condor A320 in Heraklion the previous day was not a low-speed affair. It occurred at 137kts, i.e. 2 knots below V1 for this flight. The Pilot in Command decided to reject the take-off because the First Officer reported that the plane was pulling to the right. The Captain took over, inputting rudder to the left, and closing the throttles, before going to full reverse thrust.

However, it appears that the Condor Captain also inadvertently pulled backwards on the sidestick, causing the nose of the A320 to lift off the ground. The aircraft got a maximum pitch angle of 2.8°. Realizing this, the Captain then pushed forward, to “de-rotate” the aircraft. The ground contact of the nose gear recorded a vertical acceleration of 1.7 g. The pitch rate, at the moment the nose touched down, was -9.7°/s. A typical A320 de-rotation rate is -2°/s, according to Airbus.

Photo showing how close the right main gear got to the edge of the runway in Heraklion. Photo: Condor via BFU

There were also side-loads on the nose gear, as it touched down. This is because the Condor A320 was yawing to the left, back towards the centre of the runway. Lateral acceleration during the rejected take-off varied between -0.36 g and +0.53 g. Tyre markings on the runway in Heraklion show both the aircraft moving to the right and the hard touchdown of the nose gear.

Following this event, Condor contracted engineers to inspect this A320. They decided to change the tyres on the main gear. There was no indication of delamination on the tyres themselves or on the runway. But the concern at the time was that the condition of these tyres might have contributed to the plane “pulling to the right”. And all four tyres, particularly the right tyre of the right main gear, showed excess damage. None were deflated. There was no debris on the runway. 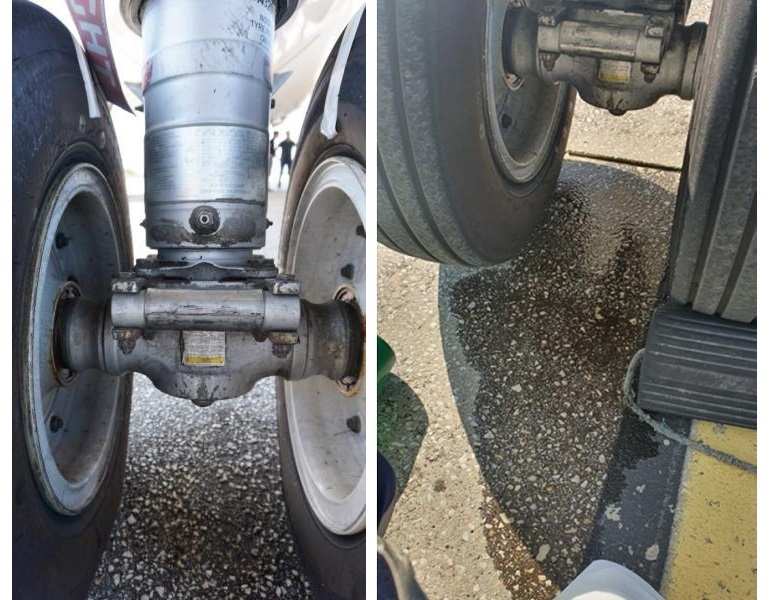 The shock absorber of the nose gear, after the return to Kavala Airport. Photos: BFU, Condor

The same Condor crew flew this A320 back to Dusseldorf the next day, with no passengers. Then another crew performed that day’s flights. They flew into Kavala once, then returned to Germany. After that, they performed flight DE-1762, again to Kavala. And that’s when problems began to appear. The damage to the nose gear was twofold. Firstly, the nose gear shock absorber/oleo was leaking. Secondly, the nose gear Weight-on-Wheels (WoW) sensor wasn’t working properly.

By the time the Condor A320 touched down in Kavala at the end of flight DE-1762, the nose gear oleo was completely deflated. Also, the WoW sensor for the nose gear had remained on “GND” position, for the whole flight from Germany. And this is important because it means that the autobrake could have engaged after the main gear touched down but before the nose did. The crew had set autobrake to MED (medium). 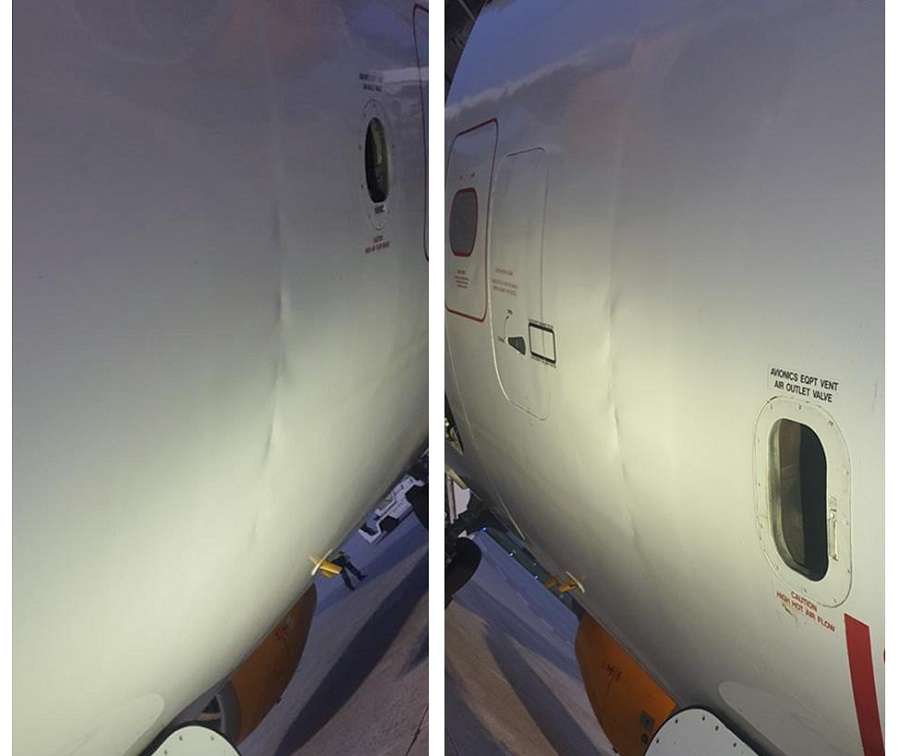 Creases in the lower fuselage near the nose gear. Photo: Condor via BFU

This time, the pitch rate of the aircraft as the nose gear touched down was between -4.6°/s and -5.6°s. And while this is lower than that of the rejected take-off the previous day (-9.7°s), this time the nose gear’s shock absorber was flat. So it couldn’t cushion the hard contact. The investigation found that this caused significant structural damage to the aircraft.

The Condor A320 suffered damage around Frame 20, on both sides of the lower fuselage. Frame 20 is the closest to where the fuselage structure takes loads from the nose gear. There was deformation on the outer skins of the aircraft there, with smaller deformations further to the rear (Frames 21 and 24). Struts and fittings that transfer loads from the nose gear to the fuselage suffered more damage. 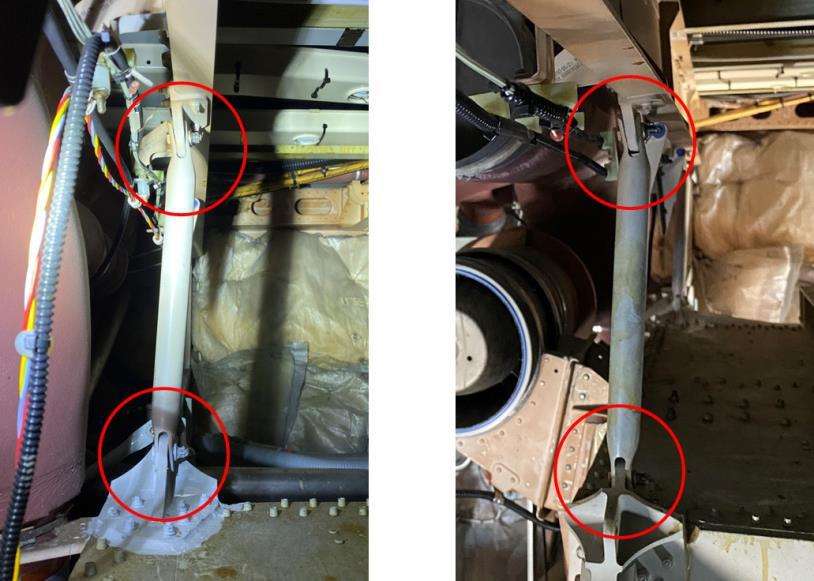 There was more damage to the tyres on the nose gear. Even so, the Condor crew took off, then returned their A320 to Kavala, when they couldn’t retract the gear. There is more to this investigation – we only have the interim report, from the German BFU. But even as of this writing, nearly four months after the accident, the aircraft is still in Kavala.

This is an Airbus A320-214, with registration D-AICP. It is now 18 years old, having spent most of its time in service with Air Malta. It later went to Monarch Airlines and Thomas Cook, before going to Condor. Its owner is lessor AerCap.