With increasing environmental concerns about short-haul air travel, could the HAV Airlander 10 and 50 airships be alternatives to planes, trains AND ferries?

In the past few months, we have seen moves to ban air travel, in cases where existing rail links can perform the journey in a set amount of time. How much this time is can vary, and there is some debate in calculating the duration of these journeys. But the general idea is gathering pace, particularly in Europe. However, a company called Hybrid Air Vehicles (HAV) hopes to change this trend, with its Airlander airships. 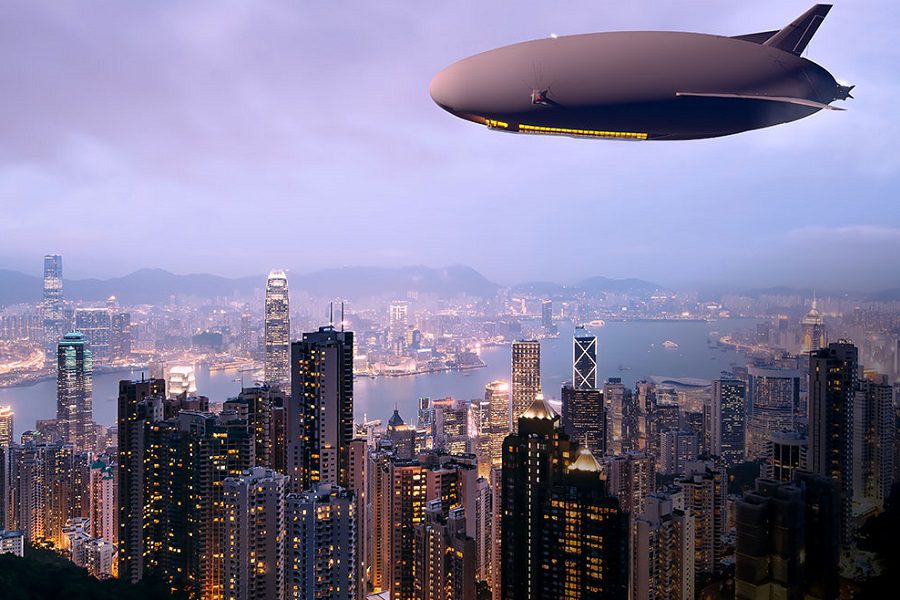 UK-based HAV currently plans two Airlander designs. The Airlander 10 will come to fruition first, since its prototype has already flown! The Airlander 50 will come later. The number in either model’s name refers to its maximum payload, in tonnes. But how did this concept come to being?

Not That Kind Of Hybrid (yet)

Firstly, we need to explain what “hybrid” means in “Hybrid Air Vehicles”. Unusually, it is not a reference to propulsion, although HAV also has plans for a hybrid-electric version of its Airlander. In this case, ‘hybrid’ refers to the aircraft’s sources of lift. Like all airships, it uses a lighter-than-air gas, to give it buoyancy. This gas is helium. However it only gets around 60% of the necessary lift from its lifting gas. 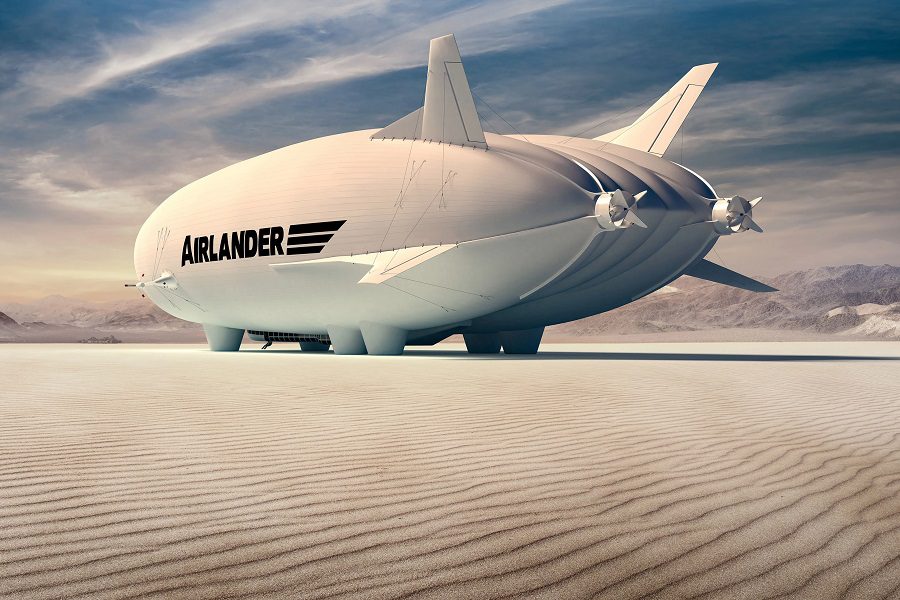 The remaining 40% of lift, comes from the hull. Yes, the odd shape you see in the pictures actually works as an aerofoil! All this is in cruise. During take-off and landing, the HAV Airlander also gets lift from vectored engine thrust. So this vehicle has three possible sources for lift, and is always using at least two of them. Hence, it’s a hybrid-lift design.

This setup not only gives the HAV Airlander great efficiency, it also makes it considerably faster than conventional airships. It is still much slower than fixed-wing aircraft, however. But HAV has an answer to that, as we will see. 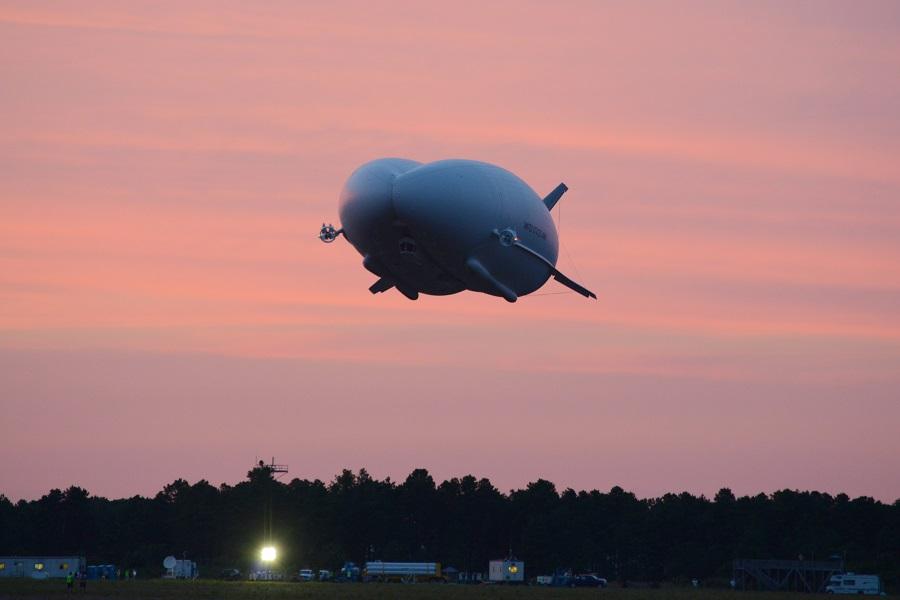 The HAV Airlander 10 actually started life as the HAV 304. It was part of the United States Army’s Long Endurance Multi-Intelligence Vehicle (LEMV) programme. Pretty self-explanatory: it would carry a variety of sensors, staying above a point of interest for a very long time. It would be capable of staying aloft for 5 days at a time, at altitudes reaching 20,000 feet.

British Hybrid Air Vehicles had partnered with Northrop Grumman in this project, which previously involved smaller prototypes. The full-size HAV 304 flew in August 2012. But despite its success, the US Army cancelled the program for lack of funding. This prototype belonged to the Army. But then HAV bought it back, de-militarized it and turned it to the Airlander 10. This involved deflating the vehicle (the US Army owned the helium!) and transporting it back to Britain. 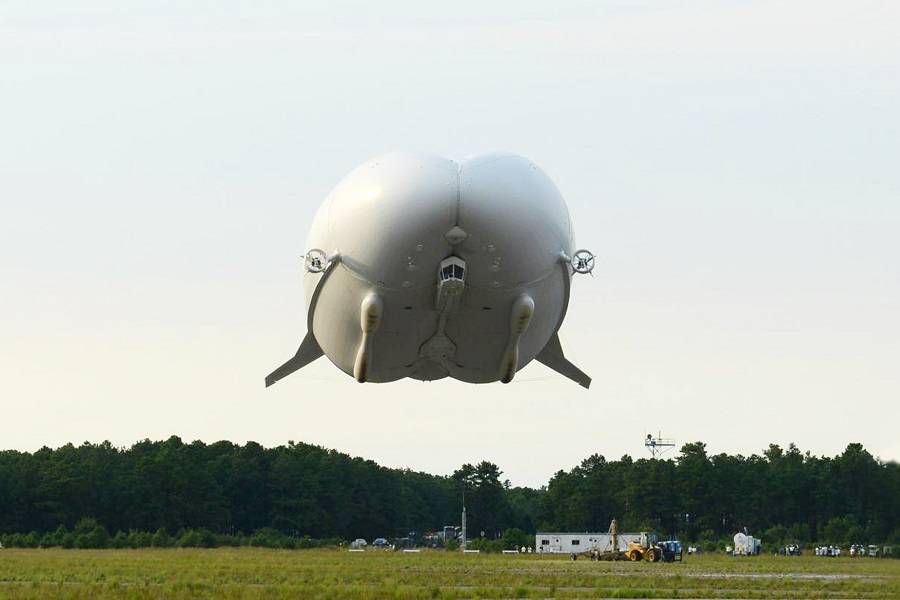 Its testing programme ended before the HAV 304 could reach its 20,000ft target, only getting as high as 7,000ft. But the designed-in endurance of the HAV Airlander, gives it an impressive range: 4,000NM maximum. With 90 passengers, the company quotes a range of 750km. And more interesting than that, is its efficiency!

At its original (civilianized) form, the HAV Airlander uses four internal combustion engines. These are V8 turbodiesels (RED A03), producing around 325hp each. When carrying 90 passengers, the Airlander 10 would produce 75% less CO2 (per passenger) than a conventional airliner. HAV does not elaborate which airliner they consider as their benchmark. However, their estimate the Airlander 10’s emissions are about 15-10 grams of CO2 per passenger-km. 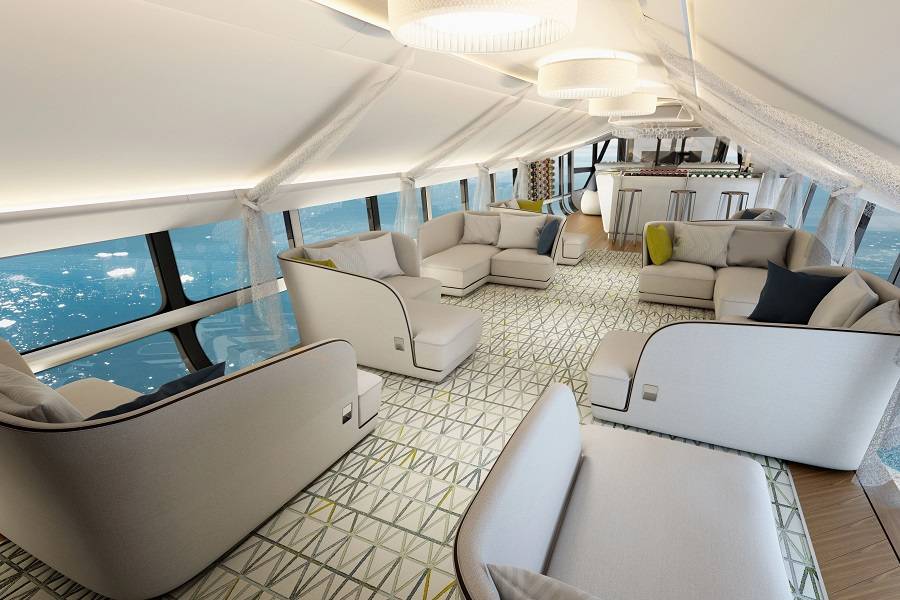 Even so, a three-quarter reduction in CO2 emissions is substantial. And this is only the initial version of HAV’s Airlander 10. They are also planning for a hybrid-electric variant, to appear from 2025. This should produce 9 grams of CO2 per passenger-km, or 90% less CO2 than the same conventional aircraft. They hope to have a battery-electric version as well, from 2030.

HAV Airlander – Practicality And Challanges

Initial rendered images of the HAV Airlander suggested that it could be a ‘luxury’ transport option. However, the company is keen to emphasize that this doesn’t need to be the case. But even if the impressive renderings of glass-bottom seating areas aren’t there, the airship will be comfier than an airliner. 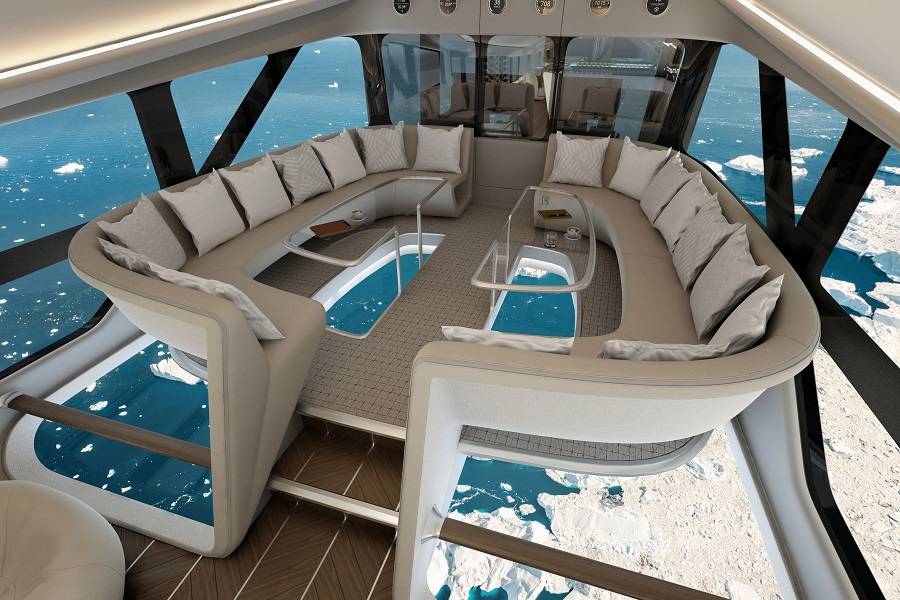 Now for some drawbacks – and let’s start with speed. It’s 130km/h (81mph). Note, too, that this is the top speed of the Airlander. It’s not clear what its cruise speed is. However, HAV is quick to point out that the Airlander will not need airports. It can land and take off from any open field. This means that it can operate from city centres, needing hardly more room than upcoming eVTOL designs.

So in practice, HAV believes that most passengers will travel faster with the Airlander than with any airliner. Again, this is for short trips between cities – i.e. the type of journey that a train might perform. The Airlander will also work well as a ferry alternative or for island-hopping trips. The point is, factoring the time it takes to go from the centre of a city to the airport, plus 75 minutes for check-in, security and boarding, the Airlander is faster than it may seem. 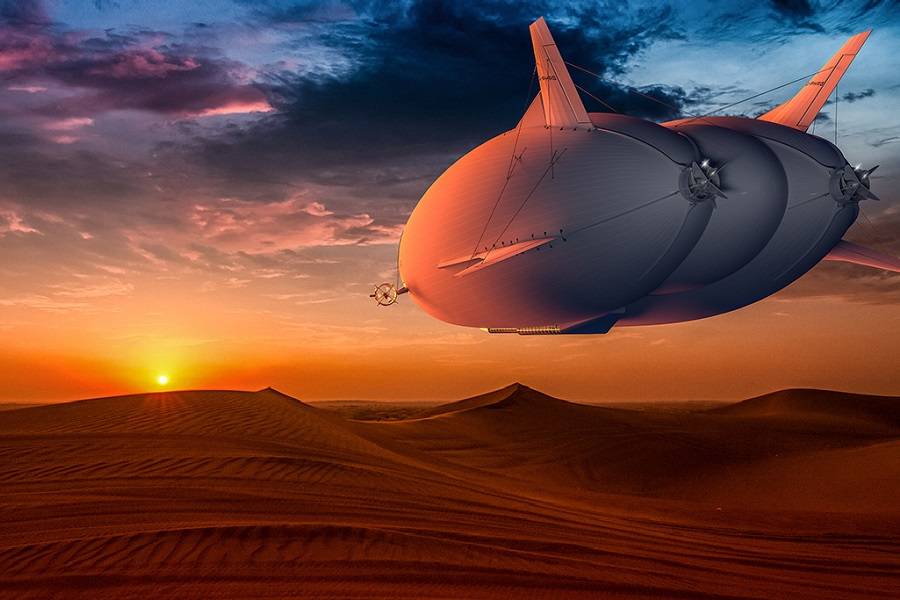 Another concern for some, is turbulence. Even for short trips, airliners can comfortably climb above the weather. Here, HAV argues that the size of the Airlander works in its favour. Because its entire hull produces lift, its wing’s chord is its entire length. The company argues that this makes turbulence very benign. And for landings and take-offs, crosswinds aren’t a factor. If the landing field has clearance all around, the Airlander can simply point to the wind, like a helicopter.

Then there’s helium. The inert gas is a finite resource, that we could run out of, in the next 50 years. HAV believes this won’t be a factor for the Airlander, in practice. In their estimates, 600 of these airships will account for 1% of annual consumption. 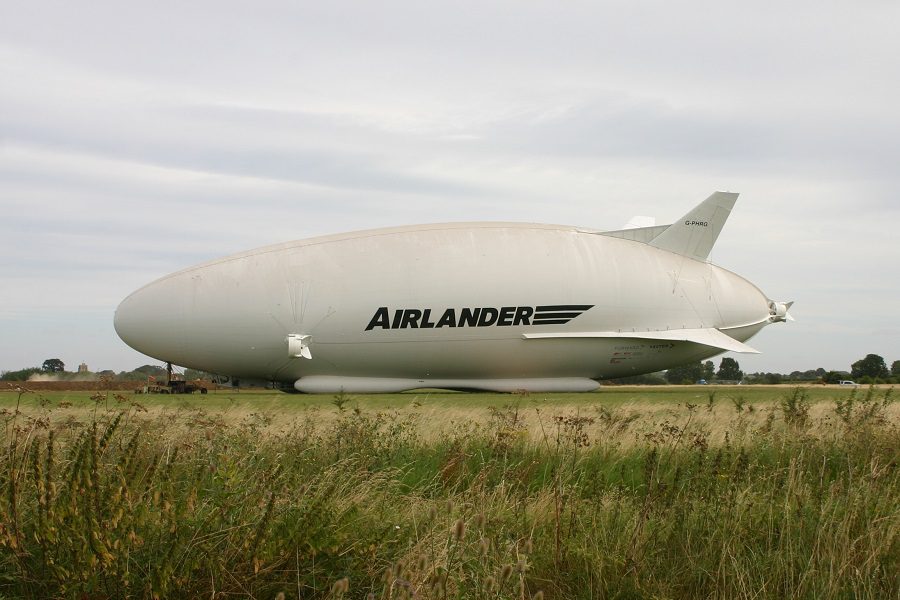 If they can handle these challenges, HAV hope to develop the Airlander 50. This will be the ultimate airliner replacement, for short-haul routes. It will carry either 200 passengers (in a 3-3 layout) or 48 passengers and six 20-foot ISO containers! It will have a range of 2,200km (1,187nmi), with either load.

HAV are currently searching for a suitable production site, hoping to produce 12 Airlander 10s a year from 2025. Sadly, the prototype is no longer operating. In 2017 it broke loose from its mooring. A safety rip panel worked as advertised, deflating the airship. Even so, the Airlander 10 received CAA and EASA design and production approvals, thanks to data from previous flights. 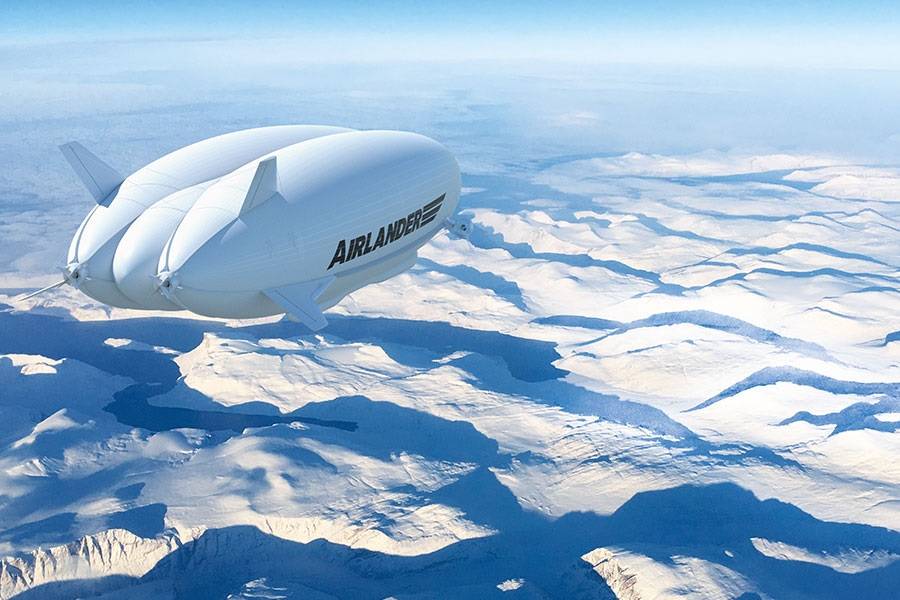 HAV readily admits that the Airlander will work more as a fast ferry than a slow plane. But it will certainly offer its passengers better views than what they’d get from a ferry. And it will do so while it has similar or better CO2 emissions (before electrification) than the best ferries! Hopefully the company will find enough interest from investors to proceed with the creation of a production facility.

The company already have UK and EU backing for this project. The idea of “low & slow” passenger flying has already generated some interest. HAV also signed a deal with Swedish OceanSky Cruises, to deliver an Airlander for arctic exploration tours!