Inline with a global effort to become Carbon-Neutral by 2050, European manufacturing giant Airbus revealed today ‘zero emissions’ hydrogen-fuelled aircraft that could take to the skies as soon as 2035.

European aerospace giant Airbus released details of three hydrogen-fueled concept planes this Monday (21 September), saying they could enter service as early as 2035. The designs, dubbed under the project name ZEROe, have varying shapes and designs, but are all meant to be zero-emission, using hydrogen as their primary source of power. We take a look at these:

Tis model includes an aircraft that would use turbofan engines and carry approximately 120-200 passengers. With a range of about 2,000nm (nautical miles), it would be powered using what the company described as “a modified gas-turbine engine running on hydrogen, rather than jet fuel, through combustion.” According to the designs, liquid hydrogen would be stored behind the rear pressure bulkhead, at the back of the plane. Hydrogen is a renewable energy source, providing clean energy and a biproduct (‘waste liquid’) of water – hardly waste!

The second design, which utilises an existing technology of turboprop engines, would also be powered using modified gas-turbine engines like the turbofan concept. Here Hydrogen stored in the bulkhead would power two turboprops similar to conventional aircraft designs of a similar type. The caveat of this design though is a lower range, about 1000nm, and a lower seat capacity. 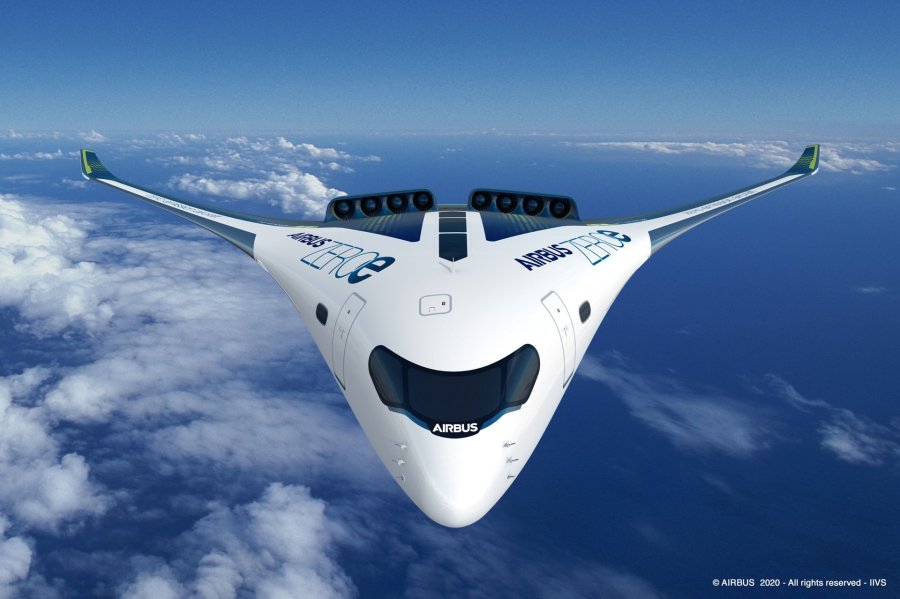 The third design is perhaps more akin to the ‘vision of the future’ we associate with technological advancement, and sees a radical vision of how airplanes could look in the years to come. With a capacity of 200 passengers (akin to mid-sized aircraft today), the “blended-wing body” concept could see the aircraft’s wings “merge” with the aircraft’s main body. This too would be powered by Hydrogen, whilst offering better aerodynamics.

“I strongly believe that the use of hydrogen – both in synthetic fuels and as a primary power source for commercial aircraft – has the potential to significantly reduce aviation’s climate impact,”

“These concepts will help us explore and mature the design and layout of the world’s first climate-neutral, zero-emission commercial aircraft, which we aim to put into service by 2035.”

While the widespread adoption of hydrogen power in aircraft is still some way in the future, smaller scale projects such as 5% of Hydrogen buses on the London Bus Network prove it is a viable source of clean, green energy.

What are your thoughts and favourite demonstrator? Let us know below in the comments!