Circular Runway Airports: Could They Happen [for real]?

Could airports with a circular runway ACTUALLY become a reality? And if so, where could such a project appear for the first time?

Two days ago we decided on an April Fools article, suggesting that Heathrow was contemplating a circular runway. Obviously this wasn’t true. However, the idea of airports with a single, long circular runway, are NOT an April Fools’ joke. A considerable amount of work was gone into this idea, as it has some intriguing benefits.

This is a concept that has featured in studies like The Endless Runway Project. This was a multi-agency European project, working with EU funding and issued its final report in 2014. Participating agencies included the Royal NLR (Netherlands), DLR (Germany), ONERA (France), INTA (Spain) and ILOT (Poland). 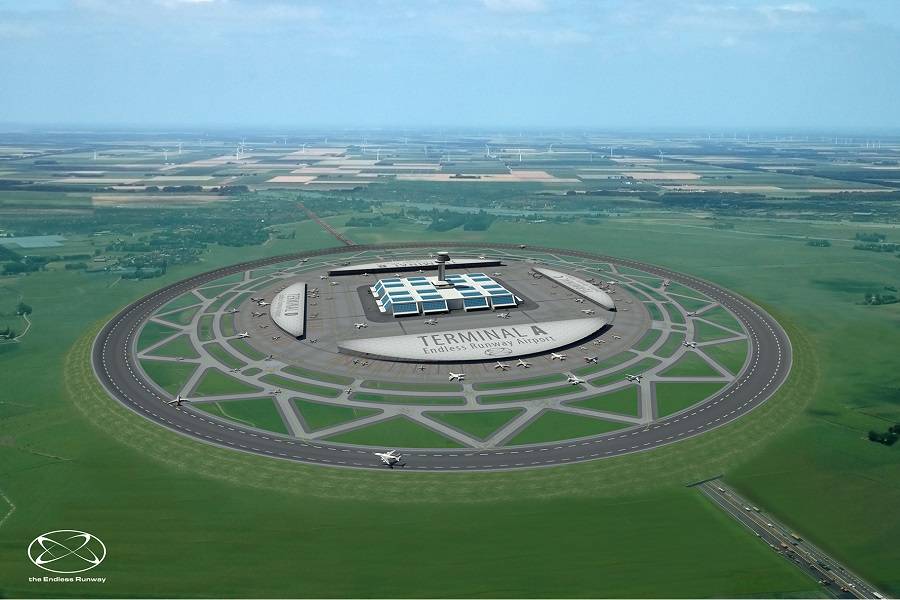 In this concept, the main feature is a circular runway with a radius between 1.5 and 2.5 kilometres (0.93-1.6mi). The ideal diameter would depend not only on the available space, but also the necessary amount of space for terminals and stands/parking. This is because it would be very difficult (if not impossible) to have aircraft operations outside the circle. So even if the centrifugal forces allow for a 1.5km radius, in practice it would likely be bigger.

The width of the circular runway would be 400 metres (1,312ft). This is necessary, to have two ‘lanes’, allowing for different aircraft to operate at different landing/take-off speeds. So the runway isn’t just banked, it also has an incline that increases, on the outer/upper side of the banking. In general, these airports do seem to make very efficient use of space. Even the space under the runway banking could be handy as car parking. 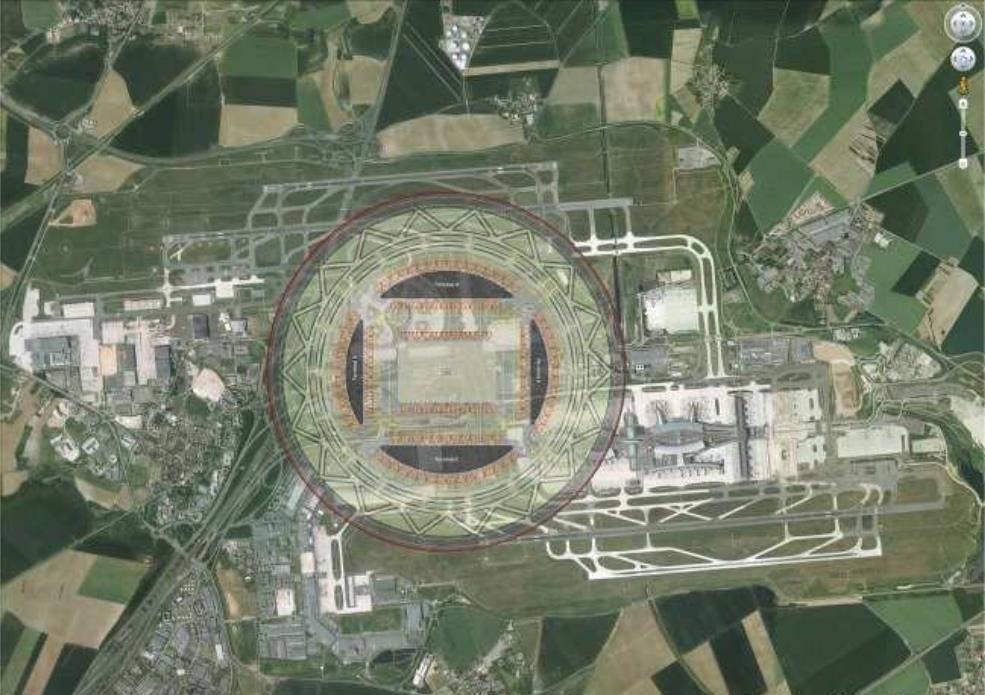 A comparison with Heathrow’s size isn’t very helpful, because Heathrow’s two runways are close to each other. But compared to the footprint of other large airports, like Charles de Gaulle in Paris, a 3.5 km diameter circular runway airport would be much smaller. However, size is only one part of the equation. Another is the efficiency of the operation of an airport with such a circular runway.

The Endless Runway project examined three different scenarios/modes of operation, for such an airport. The first is on a day with no wind, or low-enough winds for crosswind components to be negligible. In this scenario multiple aircraft could take off and land at different parts of the circular runway. The second is a high-wind scenario, where the airport would operate like any conventional airport with two parallel runways.

Finally, the third scenario has the airport operating in high wind, with a variable or changing direction. In this case, aircraft movements would move along the circular runway, to compensate. The study looked at the complications arising from setting up approaches, to accommodate this and all other scenarios. Such an operation would employ a scheduling algorithm, assigning a segment of runway at a time, to each aircraft. The study prepared examples of what such a scheduling system would be like. This includes missed approach procedures. 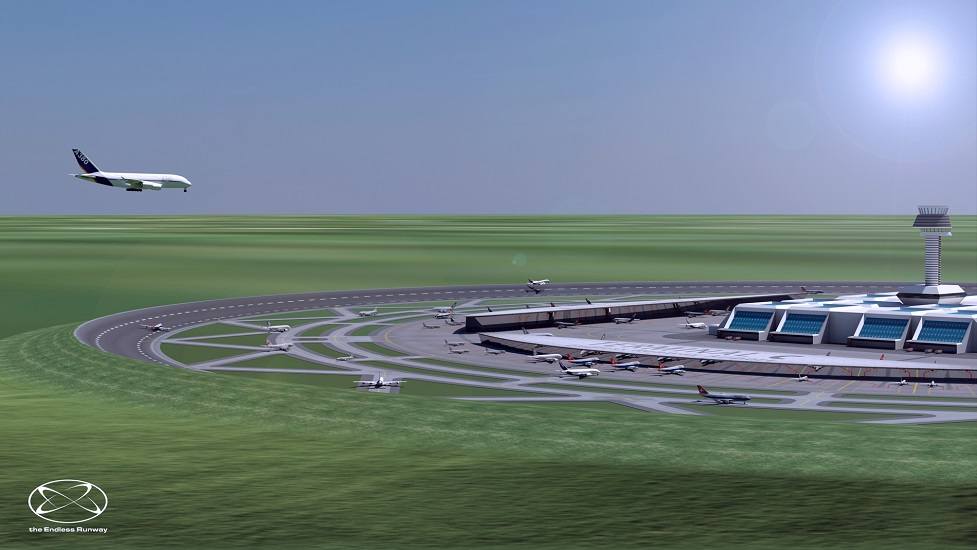 In day-to-day operations, the circular runway has some other advantages. As mentioned in the April 1st article, such airports would limit taxiing time. This is especially true when we compare them to some airports, with runways in ad-hoc positions, after multiple extensions. Amsterdam is a prime example, but many more exist. Additionally, there are no runway crossings in such an airport, easing some runway incursion concerns.

In short, the main advantages of the circular runway design are: 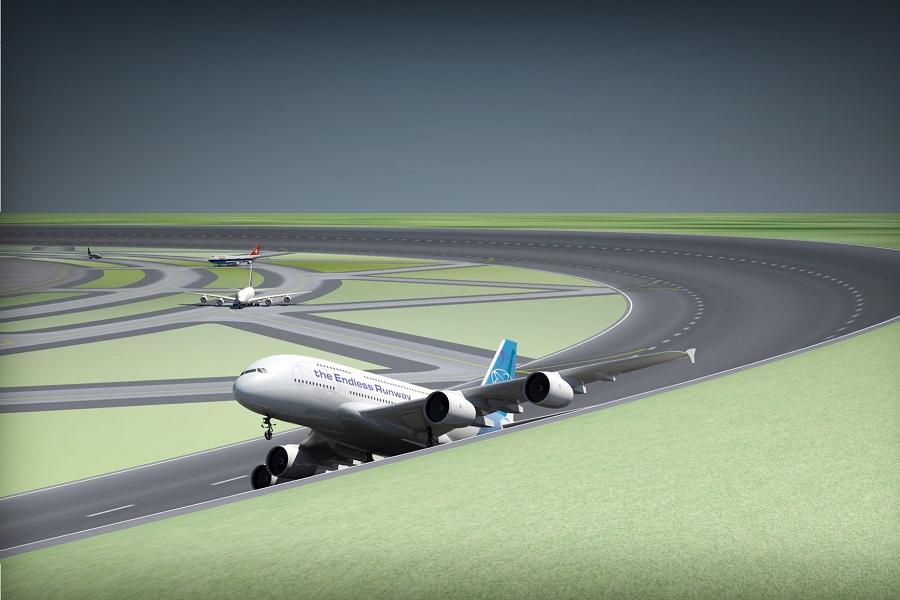 Inevitably, there are potential problems with this concept. We’ve already mentioned the banked runway, a necessity in this setup. But this banking is one possible source of trouble: wingtip or engine/pod strikes. This would be especially relevant for bigger aircraft, particularly if they have four engines. Newer airliners generally don’t. So most of them would work on a circular runway, although large wingspans (e.g. 777X) would still be a concern.

The ultimate solution to this, would come from newer aircraft, that suit the circular runway better. The study proposed a design very similar to the ‘Double Bubble’ Aurora D8. This is a joint NASA/MIT study, for an aircraft with a double-wide fuselage and tail-mounted engines, with a T-tail. However, the D8 is a 180-seat concept. The Endless Runway Aircraft Concept (ERAC) is a 450-passenger jet. 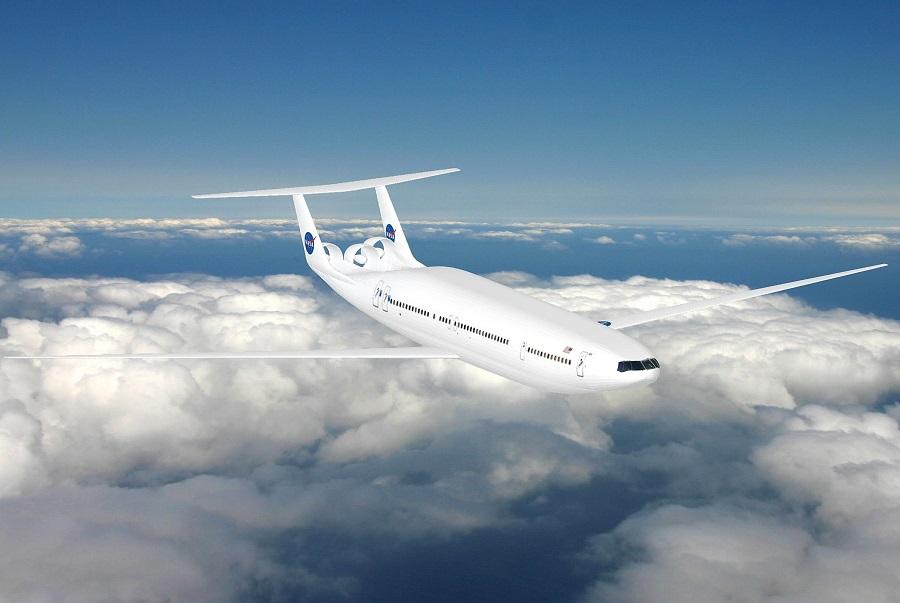 But this design would only be a very long-term solution, and only for the largest jets. Smaller existing designs should have fewer clearance issues. However another, futuristic and attractive aircraft concept would struggle with circular runways: the blended wing-body. The double-compound curve of the runway could cause some existing aircraft to re-examine pitch limitations, too.

Other disadvantages include a higher construction cost, for circular runway airports. The study’s estimate is that this cost would be 110%-160% that of a conventional airport. Also, such airports are practically impossible to extend, beyond the limit of the circle. This makes future-proofing of such an airport very important. And very difficult! 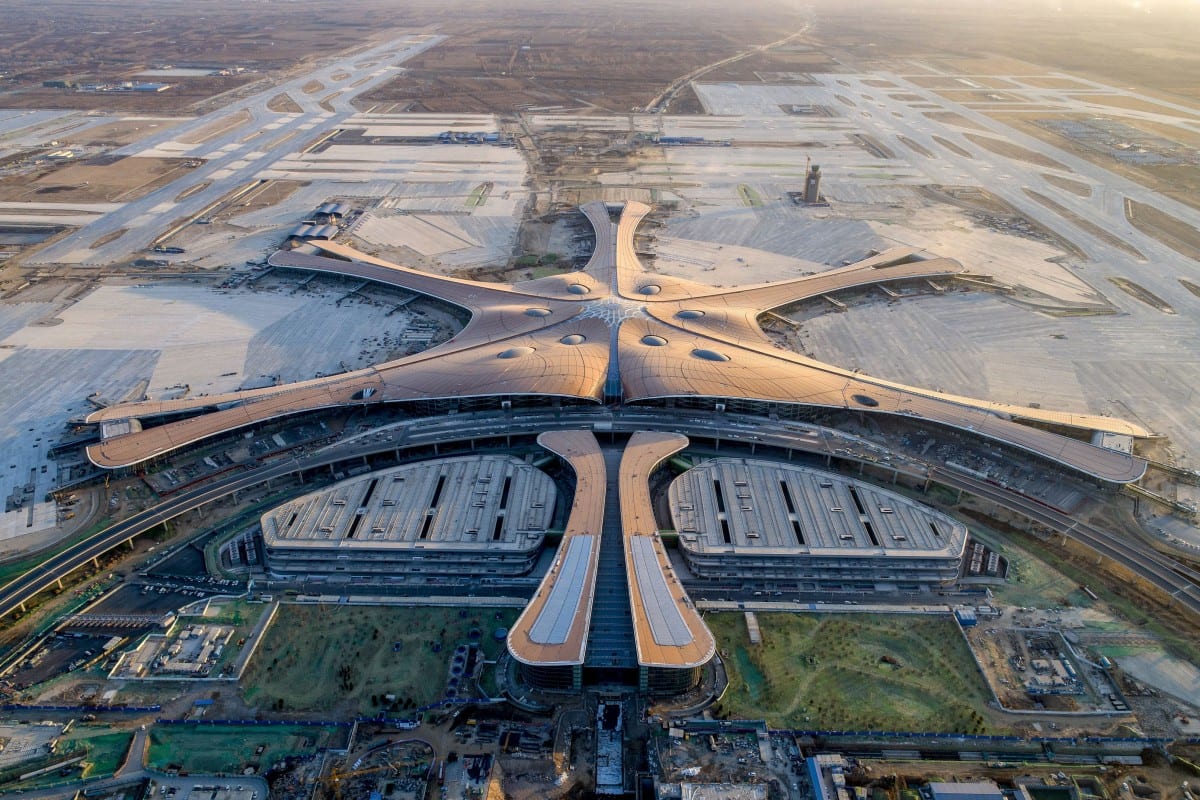 But even if designers deal successfully with all other challengers, airports with circular runways have an applicability issue. Such an airport would make sense in areas with limited space for an airport, and high-enough demand for travel. But such places would already have an airport today. And modifying the existing airport to use a circular runway, would effectively shut it down for years.

So realistically, the only way to make this happen would be to build a new circular runway airport nearby. When it’s built, the existing airport could be shut down. Indeed, the inability to expand an airport, has made this happen in the past – with a conventional new airport. In these cases, the original airport often remains open for more limited use. 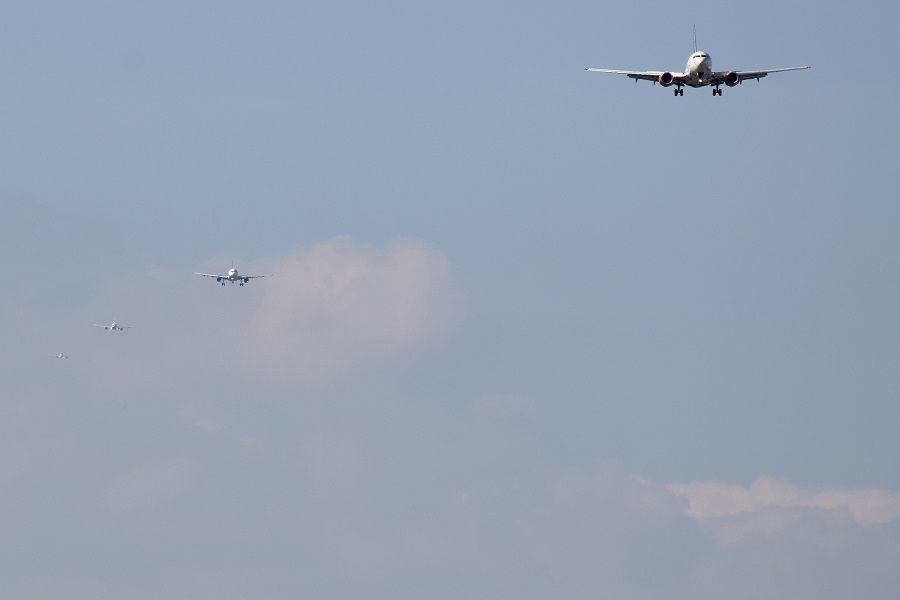 This doesn’t mean that circular airports are impossible. However the difficulty in directly replacing existing large airports, means that they have limited applicability. They would work somewhere near a clogged large airport, that is impossible to enlarge further and there isn’t space for a bigger conventional airport nearby. But where there IS a 3.5-4km circle of free space!

There are other issues. In the previous article we mentioned the need for multiple ILS systems, or infrastructure-free alternatives. A lot of work is already taking place for the latter (including the ATTOL project). But we are some way before these technologies come to fruition. And we don’t know if it will be possible to adapt them to all existing aircraft!

Circular runway airports are an intriguing idea. So intriguing that it would be quite a bold move for any authority, to approve AND fund one. That’s actually another problem! So will we see it happen? Maybe… but not before a lot of other technologies fall into place.

For an older but informative MentourPilot video, explaining some of the issues with circular runway airports, check this out below: